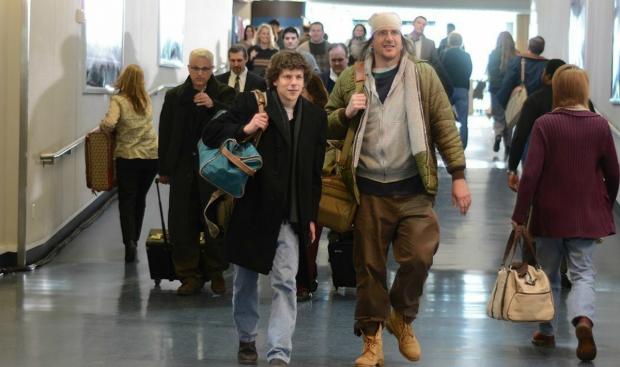 In 1996, David Foster Wallace’s epic novel Infinite Jest was released to great critical acclaim, drummed up in part by his publisher’s canny campaign to get it a lot of media attention. In the nine years since the release of his first novel, Wallace, who was uncomfortable with the media spotlight and prone to depression, realized that publicity was a game he had to play, so he agreed to go on a book tour to promote the new novel.

One of many adoring reviews caught the eye of David Lipsky, himself a fledgling novelist, whose recent first book received glowing reviews but poor sales. He got an assignment to interview Wallace, who agreed to let Lipsky accompany him on the last days of his book tour in Minneapolis. The story was never published, for reasons no one seems quite sure of: resumably it wasn’t sensational enough for the magazine, which seldom interviewed writers and was expecting something focusing on an untrue rumor that Wallace was a heroin addict.

Wallace developed a cult following, as much for his aversion to the trappings of fame as for his dense maximalist writing. When he committed suicide in 2008, that cult grew, for the worst possible reason. Lipsky published his interviews with Wallace in book form under the title Although Of Course You End Up Becoming Yourself. And that book has been turned into this film, re-titled The End of the Tour.

Wallace fans—the real ones—have any number of reasons to be wary of such a movie. There’s that title, which while appropriate to the events of the movie seems to be hinting at the author’s sad death. Wallace’s estate didn’t approve of the film (not that they were asked) and has been treating it disdainfully. And then there’s the actor who plays Wallace: Jason Segel, star of the sitcom How I Met Your Mother and such Judd Apatow-related film comedies as Forgetting Sarah Marshall and I Love You, Man.

The publicity calling this a career 180 for Segel couldn’t be more off-base, as anyone who remembers him in Freaks and Geeks already knows. Height aside, he doesn’t look much like the real Wallace, but he’s perfectly cast for the part of his life on which this movie focuses, both uncomfortable and disappointed with the public spotlight of fame and fearful that he’s turning himself into the kind of media product that his derides in his writing.

Although the film opens with Lipsky (played by Jesse Eisenberg, also well cast) learning of Wallace’s suicide, the movie is not a psychological post mortem. You can think of it as a cross between My Dinner with Andre (it’s essentially two guys talking, although just as often pointedly not talking) and Amadeus (Lipsky is both jealous of Wallace’s talent and disdainful at what he sees at his attempts to mask it—Wallace almost certainly knew that there’s nothing Americans hate more than people who are smarter than them).

But it’s far more low-key than that description would indicate. The Davids’ early conversations are largely banal bonding stuff, about guilty pleasures like junk food and slick Hollywood movies and television. Their final day or so disintegrates into petty insecurity and jealousy.

With his two previous features, The Spectacular Now and Smashed, director James Ponsoldt demonstrated an affinity for ordinary people in slightly unusual situations. That made him the perfect choice to direct this story about the vagaries of fame, such as it exists outside the America’s media centers. Don’t expect it to serve as an illustration of or investigation into Wallace’s writing. But if you’re a fan, you’ll recognize the man behind what you’ve read and likely feel that his memory has been well served in the small portion of his life recreated here. And you’ll probably smile at the final shot of him, happy for at least an evening.