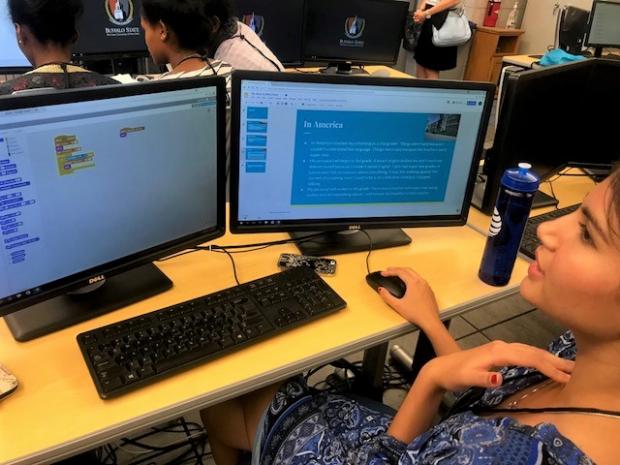 Bina Dahal, originally of Nepal, explains the game she's coded during her time in the program. Photo by Cathleen Draper.
by
Cathleen Draper
/ Aug. 17, 2018 8am EST

Elnaz Amini loves biology and dreams of one day earning her master’s degree and working in government.

Pursuing that dream could have been difficult if she hadn’t moved to Buffalo in March 2016. In her home country of Afghanistan, potential career prospects were few for women.

Amini, a junior in high school, took one step closer to achieving her goals after graduating from AT&T’s Coding Your Future camp, a two-week coding camp for young refugee and immigrant women designed to help close the tech gender gap, bring diversity to the field and slow the local brain drain.

Twenty-eight middle- and high-school-aged girls participated in the camp and honed their technology skills while also sharing their personal stories with each other. On Friday, August 10, they celebrated their achievements and shared their final projects with their families and local and state leaders.

The girls come from countries such as Nepal, Ethiopia, Myanmar, Eritrea, Congo, Bhutan and Iran, and all reside in Buffalo. Translators from Journey’s End Refugee Services assisted students with little-to-no English understanding.

“You have learned how to use the next generation’s pencil,” Hochul said. “It is coding. This is the language; this is the tool you need to be able to succeed in future jobs.”

Hochul acknowledged the girls “opened doors that were not open to [them]” prior to the camp, and she encouraged the girls to believe in themselves and have confidence in their own abilities.

Hanna advised the girls to continue their STEM education and pursue careers in related fields, especially with the growing number of jobs and a lack of diversity.

Only 29 percent of major technology firm employees are women, and just 18 percent of those pursuing bachelor’s degrees in computer science are women.

Plus, 81 percent of high school girls who study computing over the summer have a greater likelihood of continuing their STEM education into college than their peers who did not, he shared.

The girls worked with a programming language called Scratch, which features animation. Through the program, the girls created interactive computer games.

The girls also learned a variety of Microsoft Office products, including Word and PowerPoint.

Barbara Sherman, associate professor in the computer information systems program at Buffalo State, organized the teachers and curriculum. She got involved with Coding Your Future through her work with the Girls Coding Project, another coding program funded by AT&T targeting economically disadvantaged girls.

“For success in school, it’s [really] important for them to have technology, [but] they need some of the basic skills especially since we had no idea what their computer skills were,” Sherman said.

Dahal and Amini both created PowerPoint presentations that shared the most important aspects of their stories up until the coding camp.

Dahal, a senior in high school, focused her slideshow on her journey from Nepal to Buffalo in 2009, as well as the challenges she faced in school, where she was bullied for two years. Her struggles were made worse since she wasn’t able to speak English. But, her “awesomeness” started in the fourth grade thanks to a kind teacher, she said.

Now, Dahal plans to attend the University at Buffalo and study neuropsychology and eventually earn a Ph.D. in the field. And, Andolina Scott promised Dahal, Amini and their peers that Journey’s End and the regional partners would continue to advocate for the girls and their efforts towards a new life and hopeful future in Buffalo.

“We can appreciate the struggles that you’ve had to overcome to even get here and continue with your education and your own American dream,” Andolina Scott said. “Just because this program is ending today and graduation is happening today, it doesn’t mean our work for you, our advocacy for you or advocacy for immigrants and refugees who continue to come to the United States and continue to come to Buffalo is ending.”