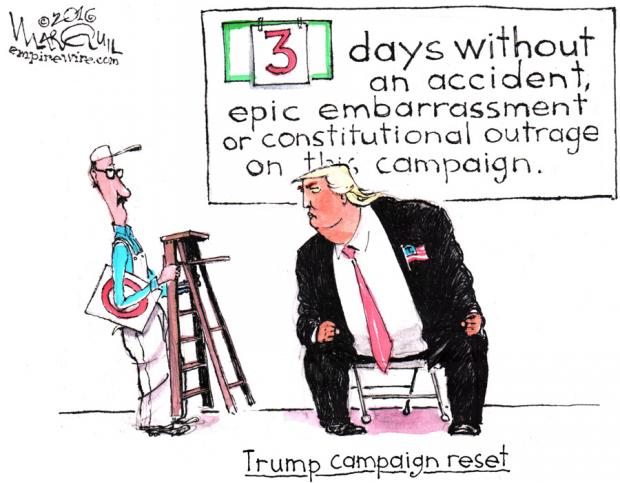 People said George W. Bush was a moron, but he wasn’t. It takes brains for a Connecticut blueblood carpetbagger to reinvent himself as a good ol’ boy prairie populist and get elected governor of Texas, of all places. Unlike Bush, however, Donald Trump is an imbecile with a rancid piece of organ meat lodged between his ears.

We can credit the corporate media for Donald Trump’s success. Early in the election cycle, while Bernie Sanders was all but ignored by the mainstream press, every Trump appearance or oral flatus drew gaggles of reporters and photographers. Worse, the coverage was generally uncritical, as in: Yes, this is a presidential candidate. Journalists, in performing contortions to appear “fair and balanced,” made believe that Donald Trump was just another presidential contender, rather than a historical anomaly.

In doing this, they suppressed the real story, that being that a fascist was climbing in the polls. The election was just a horse race to the corporate media, with coverage more fitting a sporting event than a Republican primary. This soft treatment of Donald Trump, presidential contender, amounted to billions of dollars in free advertising, with the coverage certainly bearing little resemblance to responsible journalism.

It got even worse. Trump’s main opponent in the Republican primary, Ted Cruz, was a theocrat with obvious disdain for the US Constitution. But to the corporate media, he was just another horse in the race. We can apply this same critique to almost the entire Republican primary field, which spun out of control like a kindergarten class with a Pepsi tap. Yet the corporate media failed to provide any critique of the political freak show that was passing for a primary. When debate season began, the contest started looking like a professional wrestling match. The media responded in kind, with cameras paying particular attention to the freak with the gaudiest costume and the biggest hair. And he, of course, won.

By the time we got to the general election, things were getting too weird to ignore. The Republican nominee, still backed by the GOP leadership, started suggesting that after he was elected, he would jail his opponent—or worse, suggest that someone with a gun might want to deal with her. He called for violence against protesters. He threatened action against reporters who challenged his charade. His rhetoric became solidly anchored with thinly veiled xenophobia and racism.

This racism became mirrored and heightened by Trump’s followers, with white supremacists coming out of the closet across the country, organizing neo-Nazi events, running for local offices, and committing hate crimes. Yet the mainstream media still never used the F word: fascist. Got to appear fair and balanced. Think, “Adolf Hitler is making getting the trains to run on time central to his campaign.”

Trump is finally imploding, and in a way that the media cannot ignore. Watching giants tumble is good theater, especially when you’ve created the giant. Trump is not scary. Like I said, he’s too stupid to be a threat. What is frightening is his base, his followers. Despite everything, he’s still polling at around 40 percent and is favored to win counties and states. A plethora of current polls, such as the August 8 Monmouth University poll, show that the majority of white men support him, usually by a definitive margin. And despite the likelihood of suffering terribly under a Trump presidency, Trump’s support climbs inversely to the educational attainments of voters: He holds a two-to-one lead over Clinton among white male voters without college degrees and a significant lead among women without college degrees as well, despite his misogynistic rhetoric.

At this point, however, it doesn’t look like Trump will win. He’s just too unpolished, too arrogant, too conceited, too myopic, too unlikeable, and too poorly packaged of a product. What’s terrifying is that if a fascist candidate were just a little smarter than Trump, showed a little more restraint, were personable, and weren’t orange, he or she could win the presidency. This reality illuminates a threat much larger than the Donald. Fascism may very well be the enduing legacy of the collapse of American journalism.