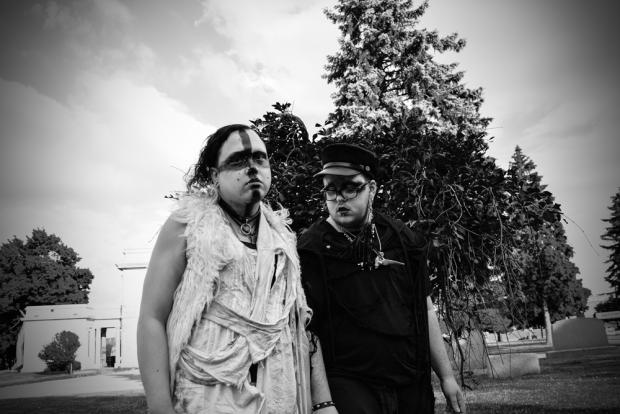 The noise, experimental, and avant-garde music scenes in Buffalo are in a good place right now. Venues like Sugar City frequently hold experimental noise shows, and bands like Cages can pack a large room—most recently the Lafayette Church on Elmwood—with drone music fans. Another notable band on the scene right now is a duo called uncertain. The pair are Felix Spencer Keigh and Florian Ayala Fauna, and they make what most would consider some pretty dark music. But there seems to be a light at the end of each flesh tunnel of noise at the core of their music, usually in the form of a hidden melody or spiritual release, and we recently discussed the inspiration behind their profoundly eerie yet intriguing music.

Their music is based heavily on their identies and beliefs.

Fauna, 24, and her boyfriend Keigh, 23, both identify as transgender, and Fauna experiences visions due to a condition known as temporal lobe epilepsy. Both have studied the occult. “I have this general sense of otherness with my identity,” says Fauna. “I think it comes from being intersex, which is kind of an alien existence, so seeking something transcendental or otherworldly is something that was bound to happen.”

Otherworldly is the perfect way to describe the duo’s art and music. The music, a collage of pulsating half-rhythms, crackling electronics, pulvarized vocals, and what sound like field recordings of water or wind, can be entrancing and mystifying. Fauna’s visual art also heavily utilizes collage. Both forms of artwork reflect the duo’s imperative for inner exploration.

Fauna gradually understood that she was intersex. Doctors have told her that this is probably the case based on a diagnostic checklist, but she can’t know for sure without a chormosomal test, which is expensive.

It’s important to note that not all intersex people are transgender, and of course most transgender folks aren’t intersex.

Fauna’s process of understanding herself began around the age of 16.

After an extensive marketing campaign, the Salton Sea, also known as the California Riviera, became a popular tourist destination in the 1950s. At the peak of its popularity as a tourist destination it was quite salty (thus the name); due to some natural processes it became increasingly salty and began to shrink. And that was the end of the tourist boom. As you can imagine, it is now a very strange place, permeated with an atmosphere of shattered dreams and lost potential where abandoned luxury resorts dot the coast line—as do dead fish.

“It’s was a very kind of post-apocalyptic-looking town,” says Fauna. “What used to be a lake resort became abandoned houses. It’s very eerie, but I think that inspired my music.”

While Fauna was growing up in Bombay Beach it had a population of 300 people. Now it’s at 295.  She moved to Buffalo at the age of 21.

Keigh works at a local store that he describes as nice and trans-friendly. It took him 11 months to find that job, however, and he describes the job market for trans people in Buffalo as tough.

Keigh lived in the Southtowns and grew up in East Aurora. He describes being bullied for being autistic, which he relates to living in a bubble or speaking a different language. He says that he was a “very desctructive, bizarre person” in high school due to misdirected angst.

“Everyone [has angst] but even more so when you’re trans and you don’t know why you hate yourself,” says Keigh. “It’s like I hate myself and I can’t figure this out, this is so frustrating.”

Keigh figured it out a few years ago. “I’d say, ‘Florian, I don’t think I’m a girl,’” says Keigh. It’s been a difficult transition, but Keigh says his family is very accepting.

Keigh and Fauna met online before Fauna moved to Buffalo. “We were both really depressed and liked each other’s art,” says Keigh.

They say that now that they live together in Buffalo, they’ve developed a more reliable support system, but at the time they were in a bad place.

“Mine was horrifically depressing,” says Fauna of her childhood. “I was morbidly depressed and nihilistic at times. I would have nightmares that were related with the epilepsy of piles of bodies, or of being a fox-child made of dirty cloth screaming at the top of a stairwell.”

Something about foxes has influenced her current album-cycle, which is five parts and which she’s been working on it since 2012. The occult is a big part of her life and work as well.

Fauna notes that her temporal lobe epilepsy plays a significant role in her creative process. “Plato called it ‘the sacred disease,’” she says.

Keigh will sometimes draw or transcribe the things that Fauna describes in her epileptic state.

“When we were first researching the connection between the temporal lobe epilepsy, her energy problems [Fauna experiences chronic fatigue], and being Klinefelter’s, which is having an extra chromosome—which is what she most likely has—we realized that they’re all related,” says Keigh.

According to informantional website on epilepsy, a shortage of hormones at a certain point in your life can trigger the epilepsy and it can be treated with hormonal treatment.

“There is something that people on forums would describe as feeling like they weren’t human,” says Keigh.

Fauna elaborates: “I actually have that problem, where I can’t identify with organic life at times. It’s very strange.”

Art acts as catharsis for Fauna, though it may or may not alleviate anything for her. It brings out processes that she doesn’t necessarily notice; things beneath the surface.

As uncertain, Fauna and Keigh have released several pieces of music, which are available for streaming on Bandcamp. Both write lyrics and music. Fauna is the main producer and she collaborates with others on the project, but Keigh is the main vocalist.

Fauna and Keigh acknowledge that their imagary can be shocking, but Fauna explains that she believes that there are two types of people who use it in their artwork; those that do it for shock value and those who do it becase they feel that it’s the right thing to do.

“I feel like what I do is what I sincerely believe is the right thing for me to do. Even if it offends society, or cultural norms, or things that are generally acceptable.”