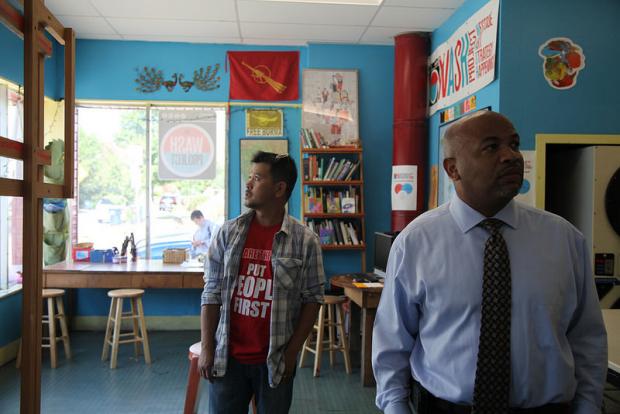 Carl Heastie is well familiar with the Queen City.

In fact, the Assembly speaker has been making regular trips to Buffalo since 1999.

“I’ve been to Buffalo 20 or 30 times,” Heastie – wearing New York state flag cufflinks, one of three pairs of state-themed cufflinks he owns – told me between stops on a tour of Buffalo’s West Side this week. The jaunt was part of a three-day trip to Western New York, the most recent leg of his summer fact-finding mission that has had him traveling across upstate.

“When I came here before it was more for personal reasons,” Heastie said. “It wasn’t in an official capacity.”

Indeed, his earlier trips to Western New York started because of a long-distance relationship, but during those trips he formed a political network and friendships that have kept him coming back for more than 15 years.

This trip was different. On most of his previous journeys he had been in town to see friends or connect with colleagues. He had never really spent time taking in the sites or sitting down with community leaders.

“I am seeing a lot of the changes that my colleagues have pointed out to me,” Heastie said. “Yet I’m still seeing my fair share of the challenges we need to work on.”

The ties that bind

One of the friendships that consistently brings Heastie back to Buffalo is his relationship with Assemblywoman Crystal Peoples-Stokes. They’ve known each other since before either of them were elected to the Assembly.

They met around the time Heastie first started visiting Buffalo. His girlfriend at the time and the assemblywoman had mutual friends through the East Side organization Grassroots, the political machine that has helped launch the careers of many of the city’s African-American elected officials, including Peoples-Stokes and Mayor Byron Brown.

Peoples-Stokes and Heastie grew closer after they became members of the Assembly, and some of his trips to Buffalo were specifically to visit the assemblywoman and her family.

So when Sheldon Silver relinquished his long-held speakership after being brought up on corruption charges earlier this year, Peoples-Stokes knew who she would support as his replacement.

She says she voted for Heastie not only because they have been close over the years, but because she believes he has the leadership style the Legislature needs.

“I know that Speaker Heastie is interested in what’s going on in the community,” Peoples-Stokes said.

He often rested his chin in his palm, eyes intent, but unable to hide his exhaustion. Wednesday started with a 4 a.m. wake-up call for an early flight into Buffalo. Intermittently he would get texts or phone calls, rapidly firing back notes or excusing himself for brief, curt conversations. Throughout the trip, Heastie rarely spoke, and instead spent hours listening as he traversed the city.

This is indicative of his style of leadership: one that puts his longtime friend Peoples-Stokes and other members of the Assembly in positions to have their concerns heard by the chamber’s head honcho.

“He is a listener and sometimes to lead you have to be able to listen,” Peoples-Stokes said. “He’s definitely good at that.”

The assemblywoman knows her close relationship with the speaker could be good for her career and for the Western New York delegation. Peoples-Stokes has been considered a rising star in the Assembly for some time, but with her longtime friend now positioned as one of the vaunted three men in a room, her access to leadership seems solidified.

“I think it’s helpful to have a good relationship with the speaker because we have so many needs in Buffalo,” Peoples-Stokes said. “A lot of the needs that get taken care of with the broader delegation are broader needs and don’t really focus on the East Side. I think the fact that I have this relationship with him (means) that we can pay a little more attention to things that happen on the East Side and move things along.” 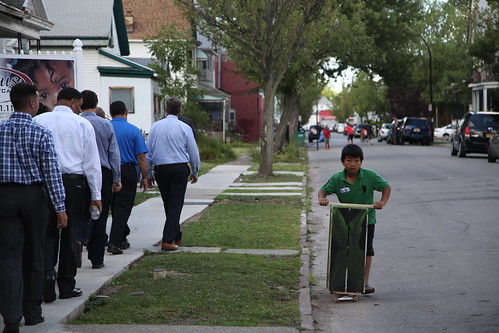 The leg of the tour during which Peoples-Stokes played host – far and away the most extensive, beginning on Thursday and stretching into Friday – started with a showcase of the storied Colored Musicians Club, which was launched by African-American players shut out of the white musicians union. Danny Williams, the club’s vice president, welcomed the lawmakers before the contingent watched a video and looked around the club’s museum.

On their way out, Heastie stopped to marvel at the AMI Rowe jukebox near the front door, its chrome speaker glistening in the afternoon sun streaming through the windows.

“I don’t think I’ve seen one of these since I was a little boy,” Heastie said. “A record player with an actual record in it.”

On a commandeered Niagara Frontier Transportation Authority bus, the cohort then made its way around Peoples-Stokes’ district, which includes many of the city’s poorest neighborhoods. Poverty has long been a problem for Buffalo, with a third of its adults and half its children currently living at or below the poverty line.

During a meeting with the Community Action Organization of Buffalo, an outfit that advocates on issues related to housing, education and access to services, Heastie sat listening to about a dozen people describe the work they do and the challenges they face carrying out their respective missions.

At one point Heastie broke in with an observation.

“These issues of poverty and families are things that I see every day back home,” he said.

Like Buffalo, Heastie’s home in the Bronx struggles with poverty and includes the two poorest districts in the Assembly.

While much has been made of Heastie’s historic rise as the first African-American to hold the speakership, his elevation was also conventional in that he was yet another downstate Democrat to assume the post.

Other than two upstate Assembly members who held the position in the interim after their predecessors resigned, no member outside the five boroughs and Long Island has been speaker since 1937, and only two of those were Republican, the last leaving office in 1975.

But that upstate-downstate division has been far overstated, the speaker and his hosts told me.

“For me, in my 15 years in the Assembly, as a New York City member I was always supportive of my colleagues’ desires in upstate New York, and we tend to do that,” Heastie said. “They’ll defer to us on New York City issues and we try to defer to them (on upstate issues).”

Ryan, also a Buffalo Democrat, said that blaming New York City for upstate woes has long been a game with no positive outcome for legislators looking to shift the focus from their lack of results.

“But I think the work we’ve done in Buffalo has demonstrated that if you do your homework, you do your lobbying with your colleagues, you’ll discover that you can get some traction.”

And while upstaters often paint downstate in broad strokes, Ryan added, the downstate constituencies can be just as different from district to district as in the rest of New York.

“Long Island and the Bronx,” Ryan said, “they don’t have a lot in common.”

He added that it was important to showcase some of the positives that have made the city a turnaround story.

He said the visit from the speaker also provided an opportunity for the delegation to show where all that Buffalo Billion money has been going.

“Spending money in upstate, turns out it’s really good for our economy,” he said.

But while downtown Buffalo is booming, with cranes in the air for the first time in decades, the city’s school system consistently graduates about half its students, poverty rates remain obscenely high and the city’s public housing agency is near broke.

“Amidst all the development and all the good things, there’s still some big problems that have to be solved,” Heastie said.

This article appears via a content-sharing agreement with City & State.