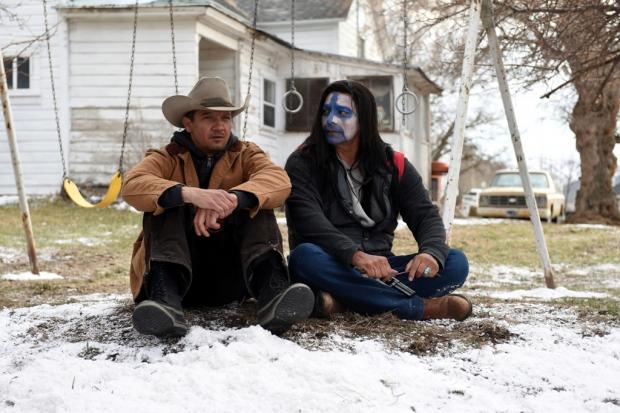 Taylor Sheridan’s bleakly moody crime drama, Wind River, is linked to last year’s Hell or High Water because Sheridan wrote the script for the earlier movie. They’re both about crimes committed in territory where the residents’ lives are stressed and constrained by social and economic conditions. David Mackenzie’s Hell or High Water was a dandy piece of work, at least until about its last 10 minutes. It had a rough-edged sympathy for its two rural Texas bank-robbing brothers who are trying to save their family’s homestead and get some of their own back against the scheming bankers who have visited fear and ruin on the already recession-ravaged Texas countryside. The picture had a populist vibe (the real sort, not the Breitbart-Trump variety). And it also extended its empathy to the aging Texas Ranger (Jeff Bridges) chasing the brothers. The movie benefitted from Sheridan’s sometimes amusingly literate script, except for those ten minutes, which were well directed and played but were rather less than plausible.

Now, in Wind River, in Sheridan’s first real crack at feature direction (there was a perfectly obscure horror flick, Vile, in 2011), he has again tackled a crime thriller with social and political material, and succeeded in expanding his errors of plausibility and emphasis. This one is really a rural noir police procedural about the death of an 18-year-old Indian girl. Her frozen body is found on a mountainside in Wyoming’s Wind River reservation by Cory Lambert (Jeremy Renner), a federal Fish and Wildlife Ranger, a white man. He agrees to assist a very green FBI agent (Elizabeth Olsen) who arrives wearing a light jacket to have Cory point out that if she ventures up the mountain on his snowmobile wearing only that she’ll “be dead in five minutes.”

The dead girl was the daughter of Cory’s Indian friend Martin (Gil Birmingham, Bridges’s partner in last year’s movie), and also the friend of Cory’s own daughter, who was killed two years ago in similar circumstances. In the movie’s treatment, this is too much heavy-handed coincidence. It permits the writer-director a markedly inadvisable scene in which Cory bluntly counsels Martin that his life will always have a hole in it without his daughter. The lack of believability is emphasized because Martin has only just learned of his loss. This kind of thing lends the proceedings an off-key tone and slows the movie down.

Sheridan has been heavy-handed and injudicious elsewhere. The two big, bloody set pieces that provide the keys to what happened and who’s responsible may be technically proficient, but they’re also examples of ill-explained excess. There are noise, rage and violence, but motivation remains obscure. Sheridan doesn’t seem to have thought through his ideas and material. He’s saturated his movie in mood, in sorrow, fear and anger and crafted, with cinematographer Ben Richards, compelling horizontally composed vistas of the rugged, frozen setting. We too often get atmospherics rather than narrative or character, despite some fine actors (including Graham Green as a slightly world weary tribal police chief).

This is the kind of movie (more or less) liberal reviewers frequently take to: It has self-serious gravity and brutally violent elements to certify that seriousness, with a crucial smattering of social awareness. A very few gestures are made in the direction of the depressed condition of the Native American population. The critical reception has met expectations.

At the very end, a text comes on-screen to tell us that no reliable figures exist on the numbers of missing Native American women. But Wind River is about two murdered young Indian women. No one goes missing. This is really more evidence of Wind River’s inconsistency and its unconvincing posture.