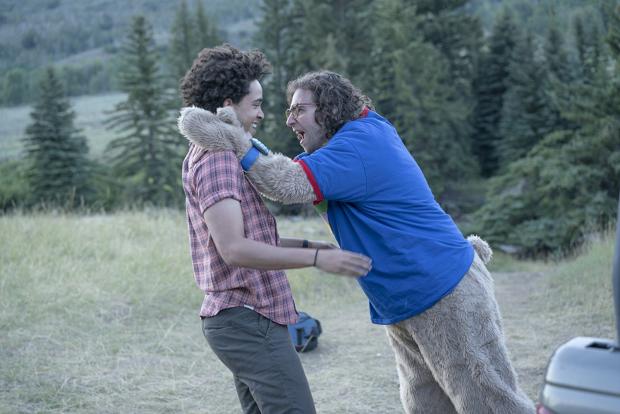 Where did he get the prescription eyeglasses from?

That’s a question that popped into my head while watching Brigsby Bear, the story of James (Saturday Night Live’s Kyle Mooney), a young man who spends the first 25 years of his life living in an underground bunker in Utah with a couple he thinks are his parents. Actually they kidnapped him as a baby, which he learns when he is rescued and brought into the outside world.

Ted and April (Mark Hamill, Jane Adams) told him that the rest of the world had been rendered uninhabitable by a gas or virus, I forget which. His only view of it was from inside a plastic dome, from which he could see Ted leave for work every day, wearing a gas mask. Actually he was going off to his job as a toy designer; he made a lot of money as the designer of a robotic doll (think Teddy Ruxpin).

To keep James’s mind occupied and provide a teaching tool, Ted also filmed a weekly TV show about a talking bear who has instructive adventures. As you might expect from a young man trapped in an underground room who doesn’t have any other intellectual stimulation, James grew up fixated on the show, the only one he ever sees. And when he is released and put in the care of his real parents, it’s an intellectual and emotional crutch he’s not willing to kick away.

Those eyeglasses, I soon realized, were one of many things that you have to overlook in a movie that is not what you could call rigorously conceived. (Another is the fact that James is thrown into life with his real family—strangers to him—with little apparent preparation.) Written and directed by Mooney’s childhood friends Kevin Costello and Dave McCary (the latter a creator of film segments for SNL), Brigsby Bear is as far as you could get from, say, The Wild Child as a study of someone becoming socialized at a late age. On the other hand, neither is it the kind of comedy (think Blast from the Past) you might expect given the SNL connections. Any humor arising from James’s circumstance is gentle and wry.

Everyone concerned with his well-being wants James to explore the new world around him, but he wants to stay in his comfort zone. So when he learns that filmed entertainment is common, he sets out to recreate and finish the adventures of Brisby.

That this accomplishment (sorry if I’m giving anything away here) is presented as a triumph seems to indicate to me the movie is aimed at the kind of audience that has grown up refusing to reject its own childhood, adults who live for Star Wars and Pixar animation,  comic books and superhero movies. (And, if you want to go there, honey mustard and appletinis.) It’s a sweet-natured movie that you would be hard-pressed to get too worked up about (despite a product placement that is as blatant as any I’ve seen in some years). But if you give it more than a moment’s thought, it seems to stand up for the infantilization of popular culture, a movement that hardly needs any encouragement.