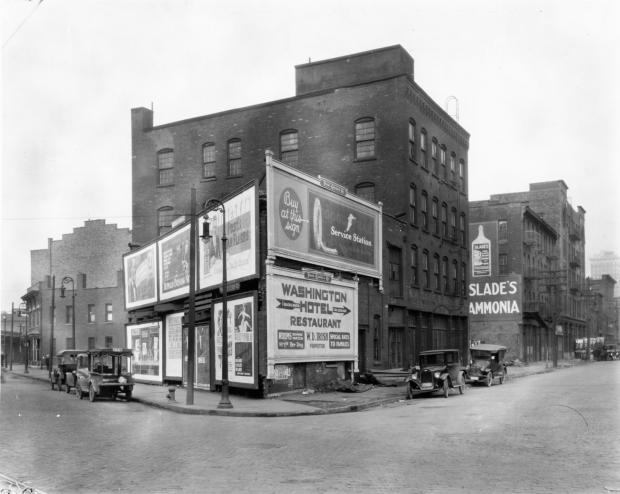 Photo courtesy of the Buffalo History Museum.
by
The Public Staff
/ Aug. 14, 2018 9pm EST
By 1925, even as the adjacent port still burgeoned with lake traffic, the Canal District was woebegone. Here, in a photograph taken around that year, is the northwest corner of Washington and Ohio streets. (Ohio Street between Main and Illinois streets was renamed to South Park Avenue in 1939.) This block now occupied by Key Bank Center was a mix of restaurants, speakeasies, flop houses, and a number of maritime businesses—including W. A. Case & Son Mfg. Co., which specialized in heavy copper smithing for steamboats and locomotives. A nearly collapsed corner building saw remaining value as a billboard location. Many of these buildings survived well into the late 1960s, when they were demolished to create surface parking for Memorial Auditorium.
Here’s the view today, such as it is: