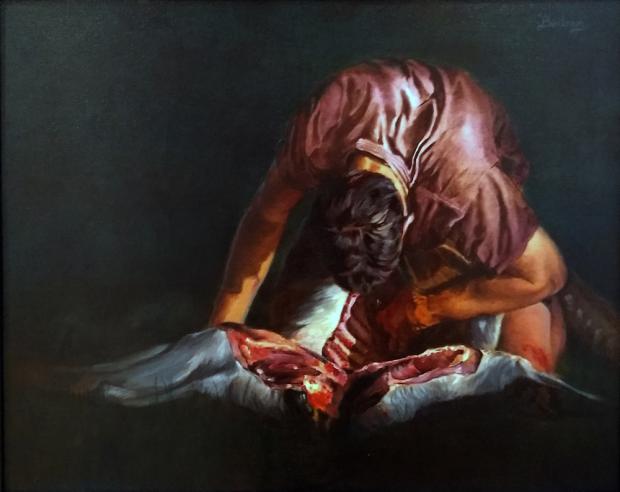 The gargantuan annual summer feature Hallwalls Members’ Show. This year, a daunting 168 works by 168 artists. Help is provided, however, by way of an ancillary feature series of artists’ talks, Saturday afternoons, starting at noon, throughout the run of the show. A half dozen 10-minute talks by a half dozen artists, about their piece in the show. What they’re trying to say or do with the piece. How they came up with the idea for it, how they produced it. Whatever.

On a recent Saturday afternoon, artist Jan Agati Abbarno talked about her dense turbulence marker drawing and collage cutout work called Steampunk, the exhibit prize winner in the Chaotic Abstraction category. A work about technology somehow. Her sense of anxiety—discomfort, forboding—in the face of the technology all around us today. “I’m not having a great transition into technology,” she said. “I’m churning.” The piece does seem to express churning.

Kari Achatz, originally a painter lately getting more into photography, talked about her penchant for old architecture—the Central Terminal building, the grain silos—and her work in the show entitled Deconstructing Complacency. In a medium she calls “photosculpture,” consisting in this case of an underlayer photo of a silos portal, and partial overlayer sheet meticulously incised with lacy patterns of geometric forms in the central part, surrounded by organic forms, leaves and grass. “Nature always wins,” she says.

Collage artist Joyce Hill’s work in the show—called Chances Are—is about a movie her daughter is involved in producing about gangsters and gambling. The artwork has a properly aleatory feel. Some photos of places Hill has been to, such as New Orleans, and a photo of the moon, and here and there some actual dominoes. Asked to talk about how much preliminary planning goes into such a work, not much at all, apparently. “I’m very spontaneous,” she says. “I start out with no preconceived format at all.”

Small assemblage artist Gerald Mead talked about why he makes such diminutive art. For one thing, he explained, he is one of 11 siblings, so grew up in a world where you didn’t get much space to call your own. Six brothers sharing one bedroom. For another, he started out his art career in textile design. “So what I was always interested in was detail,” he said. Also, a religious background—he spent a year as a young man in the seminary—relating to an enduring fascination with relics, the idea of relics. His work in the show is in homage to Shea’s Buffalo theater. Under an old camera lens about an inch and a half in diameter, some relics actually of that grandiose structure, such as a small chip fragment of the fresco application faux marble (acquired legitimately from discard material following renovation work at the theater).

Zach Pritchard talked about making his cast aluminum sculptural piece, that started as a notebook sketch that he then gradually conceptualized and produced in three dimensions, out of a vague but ineluctable impulse to make it more palpable, more real, it sounded like he was saying. The finished piece—a sort of stalk or shaft affair that thins at it rises, bending once or twice, and marked all over with deep impression thumb or finger marks—is “all about imbalance, uncomfortabilty, from every direction,” according to the artist.

And painter Larry Rosnuk talked about his work, a large painterly expressionist—with impressionist and surrealist elements—depiction of a ship docked at night along a quay, and about himself, his struggle to transform from a geophysics engineer to an artist, after he realized that was his authentic—even if possibly less lucrative—vocation. “The struggle to free up,” as he put it, “I was an uptight engineer.” It involved a move for a period to England from his native Canada, then eventually relocating back to Canada, where he now lives in Port Colborne.

A sampling of other interesting work: Rich Tomasello’s huge papier-mâché military tank exhibit centerpiece; Dennis Bertram’s noir realist impromptu butchering scene, entitled Deer Slayer; Chase Lobley’s wonderful fighting paper dinosaurs stop-motion animation video; excellent pencil drawings such as Esther Lan’s Me and My Mirror self-portrait with attitude, Erin Finley’s Hulkmania Cinderella figure at the end of a rough day apparently, and Hetta Gardner’s Self-Portrait; Barbara Hart’s acrylic on canvas Garden Party portrait of an adolescent young women who seems to not want to be there; Brian Milbrand’s Untitled Film Still #10 paint and acetate amalgam in a light box, with the look of a Petri dish experiment gone awry; Kurt Treeby’s yarn and plastic and canvas and LED lights representation of the former magnificent Niagara Falls Wintergarden as a Kleenex dispenser, or maybe just Kleenex, but anyway a throwaway; Bob Hoffman’s diptych of two thematically similar photos, one from 1968, of anti-Vietnam War protests, one from 2018, of an anti-Trump immigration policy protest; and Rosemary Lyons’s also timely mixed media floral suggestion abstract with this legend: “The priest grabbed me by the waist and pushed his penis up against my ass.”