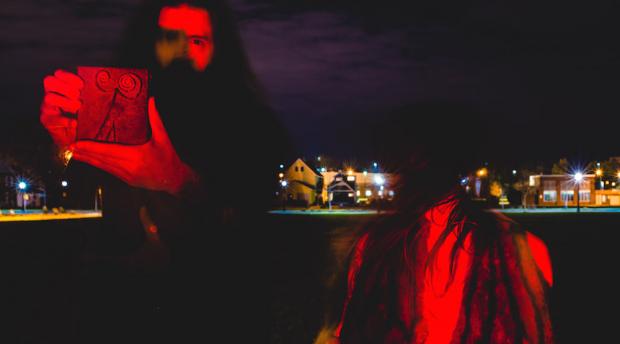 When the Buffalo experimental duo Cages performed at Silo City in June, there was a moment where a trill of birdsong splashed over the music, and I couldn’t tell whether the sound was part of the show or a spontaneous interruption from the wildlife outside. This moment stood out, on one hand, as a testament to the magic of the space. If you haven’t been to the Silos yourself, picture an industrial ruin at that sweet spot in its decomposition where it’s still an articulated structure but no longer a cage. Gaping holes in the concrete let the outside in—wild grasses and creepers, cricket chatter, and the bronze light of sunset, growing dimmer as the hot day cooled. On the other hand, the mysterious birds were striking because whether or not they belonged to Cages’ performance, they might as well have. It was as if members Nola Ranallo and David Bailey had designed the show to fit the environment so well that the environment had begun to participate.

The set began with a sound like wind howling through caves, then Ranallo—in a lace slip, facing away from the audience at first, clutching herself and repeatedly sinking into her knees like someone who had just received very bad news over the phone—came in with a wild soprano keening that might have signified grief, or madness. As Bailey manned the atmospheric registers—tucked away, turning dials, all in black—Megan Kyle, in a guest appearance, began to echo Ranallo on the oboe, swooping high and low. Meanwhile, Ranallo reached into a pile of objects in front of her and started to play them in frenzied rotation: bells, a tiny flute, a bird call. (“Whatever’s not completely smashed to pieces” at showtime, according to Bailey.)

Throughout the set, the improvisatory tension between the musicians seemed to channel through Ranallo’s contorted body. Or perhaps she was exorcising a tension from within. As she later tells me, “I think that everything you feel in your body—physically, emotionally, spiritually—comes through when you sing.” I would add that watching such a singer perform can be bodily, too. When she finally turned to face the audience, I felt a wave of physical relief, and a second one when she started singing intelligible words. She was the obvious focal point, as her bandmates followed her lead in mysterious ways. Midway through this exercise in structured chaos, those birds chimed in with a mystery of their own.

It just fit with the spirit of what we were hearing—and, as it turns out, with the group’s origin story. Cages began, briefly, as Ranallo’s solo act, in which she stitched together field recordings taped in both urban and natural settings. Bailey heard and liked one of her CDs and they joined forces in 2004. Since then they’ve stayed a duo, though they both speak highly of the Buffalo music community at large and collaborate regularly with other local artists like Kyle. For all the ways their project has evolved since its founding, the tension between organic and inorganic has stayed one of their central themes, along with a host of concomitant dualities, like analog/digital, chaotic/structured, gentle/savage, honest/obscure.

Speaking of that last one, in preparing to talk to Ranallo and Bailey, I found a cryptic, scattered online presence. To be fair, their opaque public image seems at least as much a product of what they’re not doing as any obscurist impulse. Much as they’ve tried to manage their internet presence, Bailey says it’s been a struggle. He calls self-promotion “this awful, necessary thing you have to do,” as independent artists hoping to make a living from their work, yet one that’s “probably sabotaged us in a lot of ways,” because of how they tend to avoid it. And what’s wrong with that? As Bailey points out, selling music has nothing to do with making it per se: “It’s very difficult to work on stuff that you want to feel proud about, and it’s very difficult to be able to work on it and refine it, and then to record is another very difficult process…and then you have to somehow release it, and that’s another thing, and at that point you’re just like, ‘Why would I have to convince anyone?’”

But despite this frustration or because of it, there’s a willful resistance to self-branding, too. A short biography published on the website of Black Dots, a Buffalo indie label that released Cages’ most recent album, uses the phrase “cohesive and undefinable” to package the enigma of their aesthetic. It seemed to embody the embrace of paradox in a way that would satisfy an embracer of paradox. Plus, it came from their own bio. But when I mention it to Bailey, he punctures it right away: “I think that was just kind of a joke!…It’s so silly to me to try and explain what it is that we do at all.”

Using humor and mockery to elude the genre police puts Cages in good company as avant-gardists, of course; their tongue-in-cheek tone when talking about their music is not too far from punk panache (Bailey’s background, as it happens, is in punk groups like Buffalo’s Gas Chamber), and even evokes the Dadaists, those original inscrutables. Like Marcel Duchamp’s coinage of “anti-art” tried to carve a space for works to land outside the bounds of aesthetic convention, Cages too takes such pains to avoid restrictive labels that when they do let one slip through, it’s a pert anti-tag like “post-music.” Except that they’ve already outgrown that term. Bailey laughs, “I wouldn’t say it’s even made it to music half the time.” So we settle on “pre-music,” which, for once, they both allow.

Joking aside, Cages resists explication in order to give their sound room to breathe and grow over time, and to attain a meaning that words can’t. As Bailey puts it, “If you look at it, it doesn’t exist.” That preference for leaving things unarticulated, he implies, manifests throughout all phases of their process. Thanks to the duo’s long-standing collaboration, Bailey says, they’ve “gotten to this point, I think, where we kind of know what the other one is inclined to do.” That is, their intuition for each other lets them vibe on a more subtle frequency: “The two of us have figured out this language between each other to do when we do music.”

Ranallo, who onced channeled her creativity into photography and writing, then began using text as a point of departure for writing songs, has grown—or “evolved,” in her own words—to place a higher value on the nonverbal, too: “As I’ve gotten older I’ve gone further and further away from text, just because I feel, at certain points, musically, that we need no words to communicate. We need the sound, and that’s what it’s there for, and if you can’t communicate where you are sonically, then you’re not even there.” Not even where, though, exactly? Well, as Ranallo suggests, there’s no fixed destination, and that’s the point: “I think once you define things, you limit yourself, and I don’t think we want to ever limit.”

Between their playful composure and their music there’s yet another contrast at work for Cages. From Ranallo’s cringing body, her wailing voice at the Silos show, to their most recent albums “Vivipary” and “Anti-Realist,” their stage presence, aesthetic and sound inhabit some darker realm. It’s like the instrumental version of a Gothic horror story—unnerving, surreal, mournful, savage, raw. Especially live, their unpredictable style of improvisation generates a certain suspense, even menace. The mood is also an effect of instrumentation: the jarring sounds of Ranallo’s kit of found instruments, the absence of traditional rhythm, Bailey’s spooky electronic loops, and, of course, Ranallo’s voice. Their music-making may be about play, but their music itself is—often, anyway—about pain.

For Ranallo, that theme is paramount: “In life, pain is necessary to elevate us to another level….Pain cannot be avoided, but it is contrasted by the beauty and mystery of life, and that’s what keeps us going.” The tussle of beauty and pain finds expression in Cages’ presentation, sound, and—in the absence of lyrics—song titles. There’s one on “Vivipary” called Adelphophagy, which is a kind of intrauterine cannibalism found in sharks. When I asked Ranallo what it meant to her, she said, “I saw it as twists and turns of formation, and the cruel and demented, sick things that could happen along the way. So it’s a bit raw, perhaps; probably the rawest it could get,” but “I felt like it represented life—it represented reality to me.”

Currently, Cages is wrapping a string-quartet-accompanied album that’s been 10 years in the making.