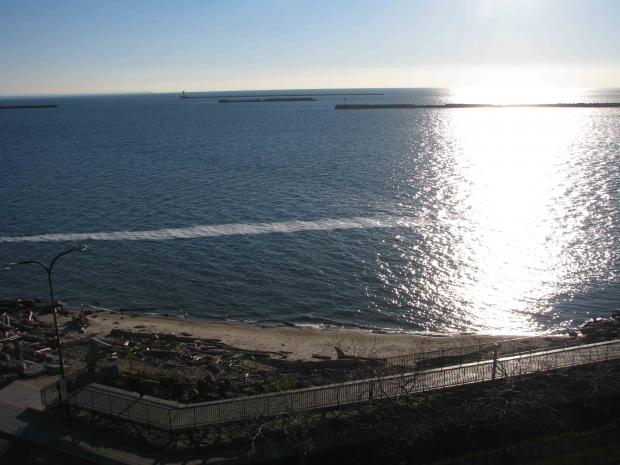 In an act that demonstrates aggressive and crucial environmental leadership not just for New York but for North America and the global community that we are all a part of, Erie County Executive Mark Poloncarz signed  Erie County’s new and historic local law banning the sale of microbead products in the county. The law, signed by Poloncarz in a waterfront ceremony, was crafted by Erie County Legislator Patrick Burke and passed the full legislature last week. It is designed to prohibit sale of products in the county such as cosmetics and toothpaste which contain the tiny plastic beads.

The sometimes microscopic plastic beads pass from our homes into our sewer systems and eventually through sewer treatment facilities and into our waterways such as the Great Lakes and the Niagara River. Sewer treatment facilities do not have the capacity to restrict the beads from passing through.  Eventually these beads pass into wildlife such as fish, which can be consumed by humans. Plastic particles and the chemicals that they break down to have been demonstrated to cause significant human health problems. In a statement released yesterday, Poloncarz said,

We hold our natural spaces and our waterways in trust for future generations, and we must do all we can today to protect them. Microbeads are small bits of plastic that add up to big problems for our environment, problems that no one envisioned when these products appeared on store shelves but are now apparent as these plastics build up in our waterways and in the chain of life in Lake Erie. The accumulation of billions of these tiny plastic particles in our waterways and in Lake Erie pollutes our environment and threatens fish and the other organisms that ingest them, disrupting the food chain and poisoning our water bodies. With this local law, Erie County is leading the way in New York State in protecting our residents and our environment. I thank Legislator Burke for his leadership in sponsoring this law, and I join him in his commitment to preserving clean, healthy waterways in Erie County and Western New York.

A tweet yesterday by Ra Cha Cha depicting Erie County Executive Mark Poloncarz signing the microbead legislation; the manufactured headline calls the ceremony the signing of the “Hell No to Condos on the Outer Harbor Act,” which Poloncarz enjoyed apparently, as he retweeted it.

Jay Burney is contributing editor on environmental issues for The Public and a founder of GreenWatch.