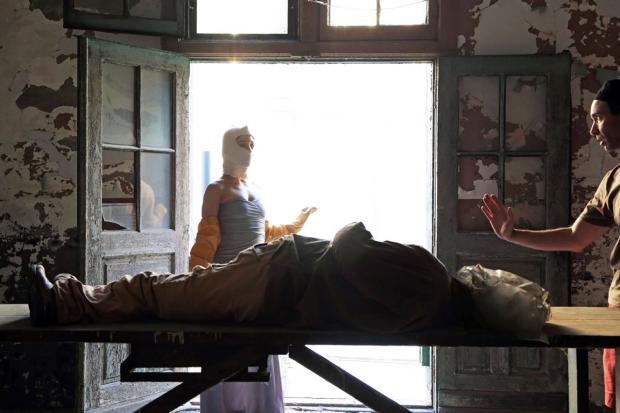 Just as the Erie County Fair ramps up this weekend, theatergoers in Buffalo’s burgeoning cultural space at Silo City will experience a unique carnival atmosphere as part of Torn Space Theater’s They Kill Things.

As they enter the space the audience will be treated to a late-Victorian lawn fête atmosphere complete with blacksmiths, livestock, Maypole dancers, gospel singers, beer concessions, and hooligans. And all of these elements are part of the shifting narrative; even the beer tent will have a beginning, middle, and end.

It’s Torn Space’s third annual production at the silos, a tradition that is fast becoming a highlight in Buffalo’s cultural summer landscape. This year the production has grown to six performances spaced out over two weekends and includes the contributions of as many as 60 artists, musicians, singers, dancers, and performers.

A preview image for They Kill Things featuring Kalub Thompson.

They Kill Things may not include overt storylines continued from years previous, but director Dan Shanahan is attempting to tie the pieces together thematically in their design and practice. “We’re creating a mythology centered on these archetypes we’re creating,” he says. “So we will begin to use recurring images, motifs, sounds, as far as our soundscape, because everything is originally constructed from a design perspective. The other thing we’re starting to build upon is more of a point of practice. Our philosophy of constructing these pieces at the silos is that we reach out to these various community groups and embed their talents into our overall aesthetic.”

Hence cheerleaders and boxers last year, and horses and blacksmiths from Arc Iron Creations this year.

After viewing the play’s prologue on the lawn’s main stage, the audience will be divided: One group enters the silos while the other stays on the lawn. Inside the silos, visitors will be treated to room-by-room installations of image and sound set around the basic themes of killing and conception.

Each room of the buildings and each station on the lawn is the result of a process many months in the making. Last fall Silo City caretaker Jim Watkins first brought Shanahan and They Kill Things co-writer Melissa Meola into the malt house and Perot elevator and to areas of buildings that have not previously been open to the public at other events. As they toured the facility, the creative process began. “We set about thinking about the images we wanted to create, and then the images come directly from the rooms we want to work in,” Shanahan says. “These are massive buildings we’re working in and you have so many options, so many different hallways you can take. So we then map out the trajectory that the audience will take—what rooms are going to be viable, what rooms aren’t. And then hone in on writing narrative for the room, or images for the rooms, that tie within the larger structure. And then within that we start to reach out and pull in groups and people and different talents. And be flexible; I wanted to work with square dancers, but then that fell through and I had to adjust my thinking.

“The building itself is so interesting,” Shanahan continues. “Some of these rooms are fantasitc. The one that we’re calling the cathedral—it’ll be just a light and sound space—the surface space of this room is an entire floor of that building, and it is a grain sifter room. There’s these interlocking metal teeth that fills the whole space that also looks down on another floor with the same shape and then the floor below it as well. So it looks like this giant geometric painting with light shining up from it. This will be the cathedral for this town.”

Torn Space sees the silos as fertile ground for this kind of experimental work and sees in it an immediate reason to incorporate the talents of the community, “[The silos are] similar to a Greek ampitheater,” Shanahan says. “And borrowing from the power of Greek tragedy is also working with a lot of non-professional actors. I think that’s really getting back to the sort of sense of ritual. And in the larger Greek sense, community is directly involved in the construction of the work.”

Greek theater employed a chorus of at least a dozen people who spoke and acted as a single character to symbolize the attitudes of the general population toward the plot of the play. Through it, the audience was given a constant example of how community pushes the action and shapes a group’s perception from the outside. In Torn Space’s production, the audience is something of a silent chorus. In what may serve as an impromptu artist statement, Shanahan explains his guiding principles as a director of experimental theater in what can be a conservative town: “How we work a lot for these original pieces, we have to draw upon accessible art types, and then within that abstract it, deconstruct it, and then I think you can have some play.”

If not for the sheer spectacle of another summer night disappearing behind the silos, people should attend to witness one of Buffalo’s greatest historical strengths, inscribed in the lobby of City Hall itself: “Talents diversified find vent in myriad form.”

“The scale of the space, the terrain, who needs to go on to fill it,” Shanahan says. “It’s very different than working in a box of a stage. It’s incredible. It probably feels something like a film set. There’s all these moving parts and you try to create an organizational structure that pulls it together, pushes it forward and facilitates it. But you don’t have the benefit of film to go back and edit. You just have to create this open system and off it goes.”

Don’t miss Torn Space’s They Kill Things centerfold in Issue 39 of The Public.