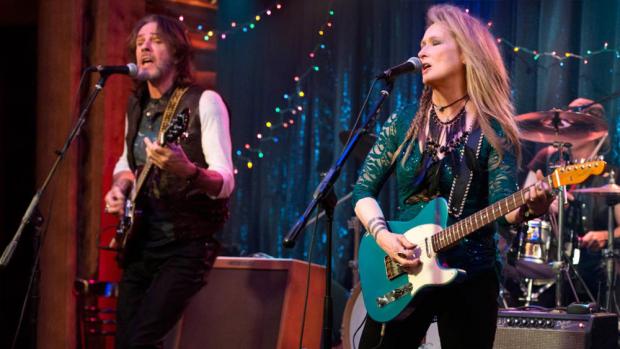 Ricki and the Flash is likely to be Meryl Streep’s last real chance for popular stardom. Jonathan Demme’s movie is best approached as a late career showcase for the actress, an old-fashioned, heart-tugging star turn—albeit with awkward contemporary social touches and cultural embellishments.

Streep has scarcely been neglected by either the industry or audiences. She is, after all, a multi-award winner whose work has elicited praise and media coverage for over three and a half decades—as well as occasional reservations from the likes of critics David Thomson and Pauline Kael. In a way, she’s functioned as a female version of Spencer Tracy, who was regarded as an actor’s actor in Hollywood, but with a much greater range and a bigger toolbox than he had. But she’s been touted as an actress, an artist, not a pop-culture avatar. This may be one reason she’s lasted so long, but if this movie indicates anything about Streep, it’s that she’s wanted more popular enthusiasm. A quarter-century ago, Mike Nichols tried to help her get that with Postcards From the Edge, the first movie in which she demonstrated her singing ability (doing a cover of Ray Charles’s “You Don’t Know Me”). But that mother-daughter show business soap didn’t do it and Streep, now in her mid-60s, must know this likely will be her last opportunity to work big and capture hearts.

She plays Ricki Rendazzo (nee Linda Brummell), the lead singer in a southern California bar band (whose lead guitarist is played by Rick Springfield). The Flash play in a Tarzana gin mill to small groups of mostly aging regulars. Decades ago, Linda fled her spousal and parental responsibilities in Indianapolis to chase musical glory. She’s wound up in a studio apartment playing weekends in the Salt Well, and a job in checkout at a Whole Foods-style grocery emporium. Out of nowhere—an appropriate locale for this movie—her wealthy ex (Kevin Kline) summons her back to Indiana to help him cope with a despondent daughter (Streep’s real daughter, Mamie Gummer) whose husband has suddenly left her.

So, think you can guess what results? Go on, give it a try. Ricki was written by Diablo Cody (Juno) with a clunky assembly-line sentimentality. Dramatically inert recriminations, little interpersonal breakthroughs, and loving triumphs ensue. Here’s Ricki, a prototypical heartland rightist, a female Ted Nugent (with a big American flat tattoo on her back), confronted with a resentful gay son. (A reality-challenged Ricki asks him if he’s involved with anyone, and she doesn’t mean a boy.)

All of this is played for crude humor and emotion-grabbing, but none of it is stirring enough to warrant suspension of disbelief. Predictability needn’t be fatal to a comedy, but Cody and Demme seem unconcerned with making their characters and situations the least bit plausible. Kline, in particular, suffers in the role of a fussy ineffectual type.

The idea that Ricki was ever a denizen of this gated-McMansion, carefully moderate, country-club world is an inadvertent joke and another example of Hollywood liberals’ political and social insularity.

But through it all, you almost have to admire Streep’s skilled adaptability. She’s virtually the whole picture, abetted by her spirited, joyous musical performances. Here and there, she almost overcomes the ill-shaped, tin-eared material. If you’re enough of a fan, you might even enjoy parts of this silly, emotionally and socially unmoored movie.