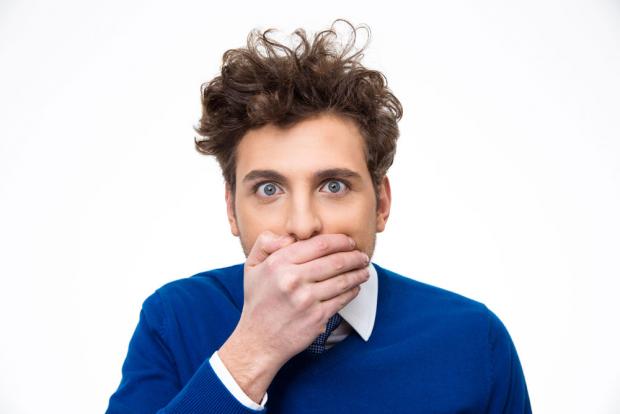 “Well, did he make the noise?”

Through the years, I’ve had countless exchanges like this. Granted, “the noise” has meant different things at different times. In the 1990s, I often used the term to describe a particularly grating speech pattern I’d regularly hear on the Green Line B-train in Boston, which runs up and down the Boston University strip along Commonwealth Avenue. Packs of college-age women from all over the country would flood the cars, yakking on and on to one another about god only knows what—you couldn’t really make out any words, just a tone. Collectively, it sounded like a baby crying crossed with something I’ve since termed Encino Valley Dismissive. (See: vocal patterns of Bangles front gal Susanna Hoffs). Today we call it vocal fry.

But “the noise” has also been code between friends for that telling sound that gives away the gay. When in doubt, listen to the way he talks. Rarely did this test ever fail me. And, much as it bums me out to admit, there’s overlap between this gay noise and the vocal fry I’d hear on the B-train. Perhaps that’s why I referred to them the same way…and why the latter made me cringe so hard. It reminded me of something I’d just as soon not know about myself and other gay men at large: We have a tendency to sound like a bunch of blathering teen girls.

A new documentary film from journalist David Thorpe called Do I Sound Gay? takes a hard look at the gay vocal noise, examining its origins and effects. In the film, Project Runway’s Tim Gunn calls my above discovery “an incredibly stunning, rude awakening.” No shit. I still occasionally hear him in my head, squealing, “Oooo, see what Anandra did? Major wow factor,” in the Expedia ad from a few years ago. Around that time, Gunn was running around talking about how he hadn’t gotten laid in 30 years. Perhaps his voice had something to do with it.

Now in his 40s, Thorpe presents himself as newly single and painfully aware of how he sounds. He hates the gay noise that comes out of his mouth and feels that, with it, he can’t show his most confident face to the world. He doesn’t want to end up like Tim Gunn. Listening to a gaggle of gay men clucking in full-force on the train to Fire Island, Thorpe likens the sound to “a pack of braying ninnies.” I couldn’t have said it better myself.

Off he goes to a speech analyst, who calls his attention to the nasality of his voice, his sing-song delivery, something called “code-switching,” which represents the different voices we use for different scenarios, the concept of “up-speak,” which refers to the now common habit of ending each statement as you would a question, and “covering,” which is pretty much just what it sounds like it’d be.

Thorpe’s journey toward acceptance of his voice takes him through multiple professional consultations and a stroll down memory lane, during which he reconvenes with old friends and family to try and discern when he began sounding gay.

Along the way he learns of studies that show how those of us who grew up with strong male influences tend to sound more stereotypically male, whereas gay men that come of age with stronger female role models tend toward a more feminine tone. Thorpe talks to his mother, his brother, his grandmother, and several childhood friends. Curiously, most of them didn’t recall him sounding particularly gay in his early years.

I, however, most certainly did. And I was painfully aware of my voice as a kid. And there were other aspects of me that mysteriously seemed to tip people off before I even opened my mouth. In 1977, I switched school systems midway through the year. I was seven years old at the time, and no sooner had I boarded the bus on my first day at the new school than an older kid called me queer—before I even sat down. I hadn’t said a word. To this day I have no idea what she was reacting to.

I remember using the word “rather” a lot. “That was rather amusing.” Other kids spat “rather” right back at me. “You sound rather gay.” Eric Roth wasn’t nearly as gentle. “You’re such a fucking woman,” he reminded me on numerous occasions. Eric hasn’t even turned up on Facebook. Maybe he died.

When I wasn’t thinking too much about it, this was just how I spoke. Some of it wasn’t so much gay-seeming as it was just strange. Thorpe’s film touches on the evolution of gay characters on TV and in the movies. So much of my humor came from cartoons and exaggerated television personalities. For instance, I used the word “droll” as a sarcastic quip, but that was something I picked up from watching The Flintstones. Between my word choices and delivery, I was a double-homo-whammy.

“The noise” was also the subject of occasional dinner table chat between my parents, who had attended high school (in the 1950s) with a man who later came out. When either spotted him in town, it went like this:

“I ran into Max this afternoon. He had his friend with him.”

“He seemed well. Very tan. They were heading to the club to play tennissss.”

At the time, this was hilarious to me, and occasionally seeing Max at the beach club waltzing around in a Speedo was also rather amusing. My parents weren’t hateful people. They were having a laugh at someone else’s expense, true, but—contrary to today’s outrage-based, histrionic, over-reactive culture—that doesn’t equate with hate. In fact, I think it’s helped me keep a sense of humor about myself, being gay, and some of the more over-the-top expressions of homosexuality.

That doesn’t mean it couldn’t be hurtful when aimed back at me. Riding in an elevator with my parents in my 30s, my father farted (we enjoyed torturing my mother this way—our version of family fun) and I must’ve really been cackling because my mother said, “We need to find you a new laugh.”

Outside of such isolated incidents, however, I stopped worrying so much about my gay sound later in my teens. I’d always been good at impersonations and became known for the hilarious things I could do with my voice, which deflected criticism. What was once a liability became an asset. Adults, by and large, thought I was well spoken and by the time I was in college, my voice and vocabulary were less of a sticking point with others in my peer group.

For Thorpe, however, it produces debilitating anxiety. An out, middle-aged, urban gay male, he confesses he’s afraid his voice is repulsive to other gay men. The fact that so many of those other gay men sound just the same seems lost on him. Why? Well, because we tend not to sexualize other gay men as they appear to us in our daily lives.

Instead, most of us are enamored of the pornographic gay male—the taciturn one that grunts like a Neanderthal while unapologetically taking what he wants from you. As David Sedaris points out during one of the film’s many interview segments, if a figure in gay porn were to do much speaking, he’d lose his sex appeal as the viewer suddenly realizes, “Ugh, he’s just like me.” Like so many passing crushes on the street, attractiveness fades the minute they open their mouths and that purse drops out. And yet, most of us sound like that, at least to some extent. It’s a horrendous dichotomy, and it keeps many of us single.

Gay sex columnist Dan Savage—who, ironically, doesn’t sound particularly gay at all—reminds us that as youngsters, the way we walked and talked were the big giveaways. “When you’re young and trying to pass, you police yourself for any evidence that might betray you,” he says. He admits that the main reason some gay men reject others for sounding gay is rooted in misogyny, especially since we’ve spent so much time and energy trying to prove to mass culture that we’re not “not men.” Cue Eric Roth, albeit perhaps from the grave.

Worse yet is what that reveals about our sexual value system: By being sexually attracted to a straight masculine sound (as opposed to the reality of the average gay voice), we’re coddling the voices of our early oppressors—older brothers, angry fathers, school bullies, etc. In short, many of us are busy playing a penile game of Stockholm syndrome. Years ago I posted an article about fem-voiced gay men not getting laid on Facebook and the first response (in agreement that feminine voices are a sexual detraction) came from a deaf male. It really concerned me: Is “the noise” so penetrating that even deaf people hear it?

A friend of Thorpe, a choreographer who seems enviably happy with himself, sums it up nicely: “This thing of hyper-masculinity is such a conscious performance in gay male culture, all the time, everywhere you go, and it just feels…oppressive, at times, to me…so ungenerous and so unloving.” Ungenerous and unloving—and so sexy to so many of us.

Thankfully, the most compelling takeaway from Do I Sound Gay? flies in the face of the hyper-masculine (dilemma?) ideal. The gay men Thorpe speaks with who are the most comfortable with themselves, voice and all, are in long-term relationships. No longer concerned about how they sound to prospective partners, they’re able to let go of the posturing in which many of us become helplessly mired as single guys on the prowl.

And yet, they willingly admit that their partners are far from that uber-masculine, pornographic ideal. Indeed, they possess masculine characteristics that reveal and strengthen their mutual attractions over time, but the grunting Neanderthal is nowhere to be found.

These men have not asked each other to change. Instead, they’ve become more and more themselves. Being gay sometimes comes with feminine sounds and mannerisms, and just as some of us have spent tons of energy fighting against them, others have worked just as hard to accept them. A man with the confidence to be himself, whatever that may entail, exudes a greater, more lasting, and complex sex appeal than any one-dimensional, alpha-male can even dream of. And, y’know, he might actually stick around after the sex becomes less frequent.