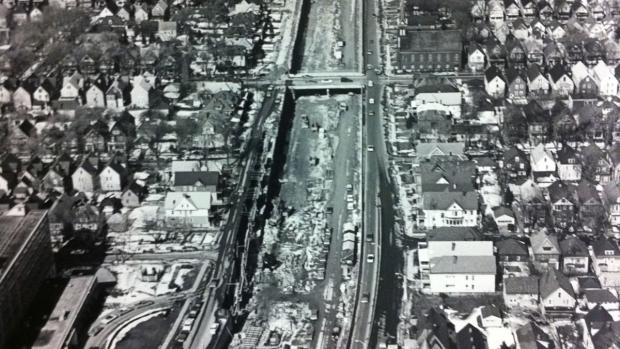 Some community groups and even Mayor Byron Brown have called out recently for remediation of the damage the Kensington Expressway—NY 33—has done to the city of Buffalo.

That road has done astonishing harm to the life of this city. It destroyed viable neighborhoods along its entire length. It existed for two reasons, one of which (like the 198) was to connect other neighborhood— and community-crushing—roadways to the Interstate highways surrounding the city. The other reason was to make white-flight from the inner city easy. The Kensington made it possible for all those executives working downtown to go from their offices, to their in-building parking lots, and to flee to the suburbs.

It wasn’t Metrorail that killed downtown Buffalo: We’ve been hearing that canard for years. It was highway planning that made it feasible and attractive for people to work downtown and live in another city after the lights went out.

The 33 did something else: It destroyed the most magnificent parkway Frederick Law Olmsted designed in his grand plan for Buffalo, the one parkway that tied the city together: Humboldt Parkway.

Humboldt Parkway had trees on both sides, with adjacent lanes for traffic, and between those lanes was parkland that ran from what is now Martin Luther King Park to the 198/Parkside entrance of Delaware Park. Anyone along that route could cross a narrow traffic street and be in a parkland defined and bracketed by three lines of shade trees. You want to have a picnic? Cross the street.

It was beautiful and functional. The planners gutted it to enable white flight and to isolate the inner city. The only decent thing they did was to call it the Kensington Expressway rather than the Humboldt Expressway, which would have (forgive the cliché) been adding insult to injury.

So we’re talking now about turning the 198 into a human-friendly street, with slower traffic, bike lanes, and pedestrian crossings, all of which may reunify the bisected Delaware Park. New York State Department of Transportation is resisting all of this, but there is so much momentum they will probably have to back off their usual bureaucratic lethargy and allow it to happen. And there is a lot of work going on making the city’s waterfront accessible again, because there is money to be made there.

The parts that are below grade are ready for that. The parts that are at grade can be dropped and covered over. From an engineering point of view, this is simple stuff. It will cost a lot of money, but so does the damage that road does to the city, both in terms of neighborhoods it destroyed and the Olmsted parkway system it obliterated.

Middle-class people are moving back to downtown Buffalo now. We no longer need or want a road to help them flee to the suburbs. Traffic from downtown to and from the airport doesn’t need the space the Kensington and its access roads consume.

So bury it. Cover it over. Give us our city back.