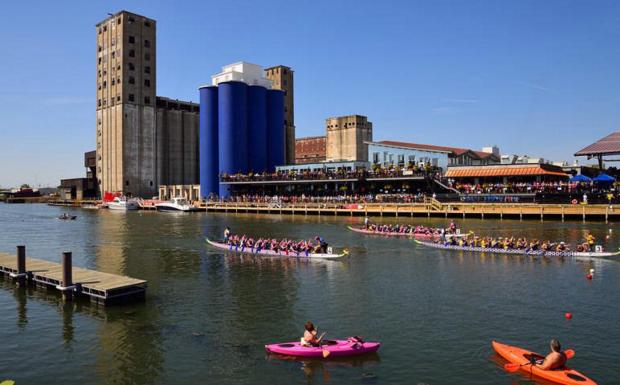 Riverworks Regatta by Masinka via Flickr
by
Alan Bedenko
/ Aug. 11, 2016 7am EST

Earlier this week, someone — likely the Flaherty for DA campaign itself — “leaked” the results of a poll showing Flaherty absolutely crushing his Democratic primary opponents, John Flynn and Mark Sacha. But the law states that any campaign releasing the results of any poll must release the entire thing, in its entirety, and also file it with the Board of Elections. Flaherty’s campaign, which has already engaged in cheap and unbecoming shenanigans such as buying “FlynnforDA.com” and redirecting it to Flaherty’s own site, then did just that — released and filed the entire poll. But as people looked at the way in which this poll was conducted, this ploy has blown up in the campaign’s face.

The poll was conducted by David Binder research in late July, surveying 401 likely voters. It used language to confirm for people that Flaherty was the incumbent, “your District Attorney”, and fed people a barrage of negative messaging against Flynn — three separate attacks, while similar attacks on Sacha and Flaherty were very inside baseball. It falsely linked Flynn to Pigeon, called Flynn a “perennial candidate”, and falsely accused Flynn of supporting a wife-beater. That’s one way to suppress the vote and underhandedly attack your opponent with falsehoods.

The Flaherty campaign didn’t release this poll from a position of strength, but of fear. It is desperate to destroy Flynn and, by extension, Democratic Chairman Jeremy Zellner, and will go so far as to conduct — and publish — a blatant push-poll, but not before trying illegally to leak it. Flynn’s fundraising has been very successful, while Flaherty’s has lagged. Flaherty is trying to portray himself as inevitable in order to bolster his own fundraising efforts, despite his campaign being objectively outperformed in support and cash. County Executive Mark Poloncarz will enter the fray at a press conference scheduled for 2pm on Thursday.

Republican Kevin Stocker is going to court to prevent his removal from the Conservative fusion line based on the elimination of just enough petition signatures. He accuses Conservative fusion party boss Ralph Lorigo of retaining private investigators to pose as law enforcement and intimidate people into renouncing their signatures in some way. Given that Republican County Clerk Chris Jacobs, who has not yet told voters whether he supports his party’s Presidential nominee, will almost certainly get the (R) line, Stocker’s removal from the (C) line would leave him effectively out of the November general election.

The Republicans have also tried to take over the Green Party line again, and that, too, is going to court due to some apparent petition irregularities in an effort led by Todd Aldinger, who was most recently the chairman of the Erie County Charter Revision Commission.

As for the Presidential campaign, you’d think it was October. Hillary Clinton is running a professional, competent campaign effort. She is discussing the issues, traveling the country, and inundating swing and battleground states with advertisements. The same can’t be said for the Republicans, who find themselves backing an authoritarian charlatan with a mouth as big as his experience and knowledge are microscopic. We have learned in the last few weeks a few things — 1. Clinton Derangement Syndrome is an acute affliction that becomes more desperate with each passing day, appears to be a virus that can lay dormant for as many as 16 years before recurring; and 2. the entire campaign has become an exercise in “what insane thing will Donald Trump say next?”

Just when you think Trump has said the most outrageous lie, he tells another. It’s comical that, in order to do battle with a Democratic candidate whom they wish to portray as “crooked”, the Republicans have selected a serial, inveterate liar.

Earlier this week, Trump went too far, exhorting his cult to commit acts of violence. It came after Trump claimed — falsely — that Hillary Clinton would repeal the 2nd Amendment. Presidents don’t have the power to repeal Constitutional amendments, so Trump’s lie isn’t even especially clever. Here is what Trump said, within its full “context”:

“Bigly”, for fuck’s sake. They nominated a guy who talks like a 1st grader. But forget the “substance” of Trump’s cretinous stream of consciousness, let’s look at the remarks. The Trump people have claimed that what Trump really meant was that 2nd Amendment “people” should wield their political power, not their guns. OK. But if Hillary Clinton is President, she’s already won and there’s no voting power to be wielded anymore. Sure, the Senate could block a Clinton nomination - assuming it’s got enough Republicans left in it. But “2nd Amendment people” don’t do that — Senators do. What happened here is that Trump suggested that gun owners, many of whom already believe that their right to bear arms is wholly unrestricted, and that the 2nd Amendment was somehow designed by the nation’s Founders specifically to enable guys like accused election fraudster Rus Thompson to do battle with law enforcement and the government; “tyranny”, as defined by idiots.

Trump knew exactly what he meant, when he suggested that the 2nd Amendment people’s intervention would lead to a “horrible” day, before quickly pivoting to make it not about assassination but judicial selection. This wasn’t a dog-whistle, but Lucille Bluth’s rape horn. This is how assassinations happen. It doesn’t matter what Trump says he meant, or what his supporters try to explain away — what matters is how one well-armed, poorly hinged lunatic interprets Trump’s constant delegitimization of Hillary Clinton, and his calls to “lock her up”, and “crooked Hillary”, whom he would “indict” on his first day in office. It’s come to this: Trump conspiring with Julian Assange to accuse Hillary Clinton of somehow ordering the murder of a young DNC staffer in Washington DC, because reasons.

Maybe Carl Paladino, the worst person in the world, can’t comprehend what Trump meant, but the Secret Service sure did.

Maybe Nick Langworthy has nothing to say about it, but this is a country where a person can bring a Hillary Clinton effigy in a coffin to the Hamburgfest car show and win a fucking award. HAHA IT’S FUNNY BECAUSE HELLARY HITLERY KLINTOON IS A [insert misogynist epithet here]. They’re losing to her, so they want to kill her. It’s really quite simple. Trump’s is the InfoWars campaign. Hillary Clinton is an easy mark for right-wing lunatics to project whatever they want. But as Trump pivots from his “2nd Amendment people” incitement to accusing President Obama of “founding” ISIS, to — what’s he going to say today? That he’ll nuke Chappaqua? All Secretary Clinton has to do is get out of the way of her opponent’s self-destruction. Even the bullshit about the Orlando shooter’s father attending her campaign rally blew up in Trump’s face, when former Congressman Mark Foley was seen prominently behind Trump at a rally last night. Foley, a pervert, was caught propositioning underage Congressional pages.

The only thing at this point more glaring than the Trump campaign’s relentless death spiral is the silence of key surrogate Congressman Chris Collins, who will sell out every principle he ever pretended to have in order to get a cabinet post in America’s first neo-fascist regime. Donald Trump’s campaign began in earnest in 2012, with Trump’s relentlessly racist birther campaign against Hawaiian-born President Obama. He is an appalling disgrace in every conceivable way.