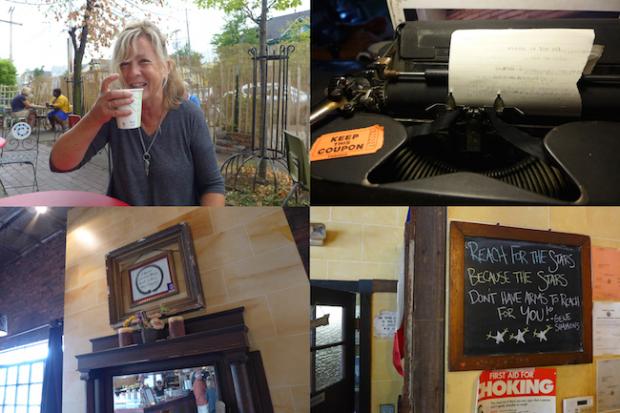 Images counter-clockwise from top left: Prish Moran, on the patio of Sweet_Ness 7 Cafe on Grant Street; the awaiting typewriter on the communal table; an uplifting quote not really by Gene Simmons of KISS; and the mantle near the doorway, including a small photo of Prish's son Stefano. Photos: Nancy J. Parisi
by
Nancy J. Parisi
/ Aug. 11, 2015 1pm EST

Prish Moran glides into one of the businesses that she owns, Sweet_ness 7 Café, her Grant Street location, and throws open the dark drapes near the doorway. The staff cheers. Regulars also cheer her entrance.

For the past two months Prish has been away from her apartment building and loci of community-gathering on the west side as well as in the north Buffalo Parkside neighborhood. She’s been in Massachusetts, in Essex National Heritage Commission specifically, in a family-owned cottage, helping her eighty-eight year old mom, Elaine, recuperate after a stroke.

As she walks through the café she straightens the silk flowers on the communal table, talks business with staff members and asks various customers if they’ve eaten breakfast/if they’d like a muffin. Prish is a benevolent whirlwind.

She talks about the trust that she has in the staff she’s got; Sweet_ness 7 employs twenty-one. “It took years to get this staff, it’s not a quick process. When I walked in after two months I saw that the back stairs are clean and sparkling, everything is in order. I’m extremely lucky. I took all my employees out to Cantina Loco last night – we all hugged and kissed.”

Sweet_ness 7 has entered a national contest created by Thomas’ English muffins, to celebrate their 135th birthday. The company selected one hundred locally-owned cafes and breakfast joints in the U.S. to be part of the contest: Prish got a call while she was in Massachusetts that her business is a finalist.

“We are going to create a breakfast sandwich called Buffalo Club, it has eggs to create the chicken part, and it has a creamy hot sauce made with bleu cheese. I think it’s a special on Parkside, we’ll be featuring it soon. Our customers will be able to vote for us soon online.”

It should be duly noted that the cafes already bake their own English muffins, thick and chewy, for their breakfast sandwiches, including their iconic Grant Slam. The contest requires them to use a Thomas’ muffin.

She reports that as a finalist Sweet_ness 7 Café received $1,000, which Prish turned over to her staff. If they win first place, she explains, she will again share the prize money. “If we win, Buffalo wins!”

Prish opened her first café in December of 2009, after the death of her son, Stefano, in 2007. She explains that she was inspired to purchase the building at the corner of Grant Street and Lafayette Avenue (the sale, for “$112 thousand included the church next door”) after doing restoration work nearby on Parkdale Avenue with her son.

Her building-renovating journey, she says, “Has been unexpectedly magical. Stefano had pointed out that the only thing missing on Grant Street was a coffee shop. I am a decorative painter, I had no experience in any of this. I want this to inspire anyone. There are ways to do things and it’s not always the book way. We have to inspire others.”

Prish says that in her collection of art magazine clippings was a work by an artist whose name she can’t recall. The painting featured a shining, smiling form that she used on a mural on the side of the building facing Grant Street. “I found out that it’s the god of happiness in Burma, the Burmese rub their hands along the building when they walk by, for good luck.”

She tells the story of lending sunglasses on a sunny day to a man who would later become the banker who got her a loan to acquire the property. And about several other chance encounters that inspired and pushed her forward with the project to renovate the building, at a time when “my friends, attorney, my family thought I was insane.

“It’s never been about money, it’s about personal passion.” Check for updates on the Sweet_ness 7 Café Facebook page to see how to vote for the Buffalo Club.