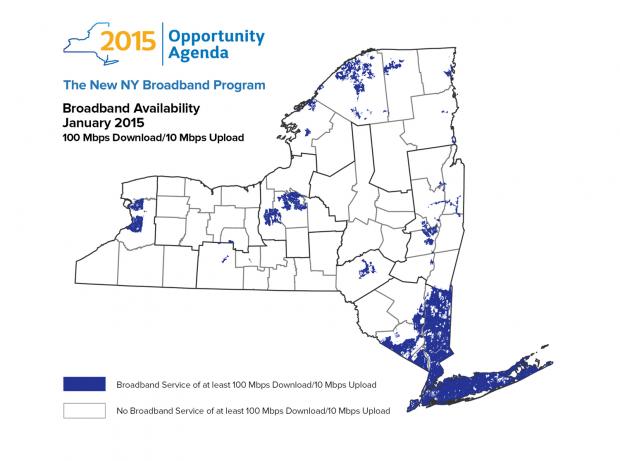 When Gov. Andrew Cuomo announced his Opportunity Agenda in January, he highlighted the lack of access to high-speed Internet in many parts of the state, particularly in rural areas. He said he wants to bring broadband to every corner of New York by 2018 and pledged to match private companies’ investments up to $500 million to make it happen.

Several areas of New York jumped to take advantage of the initiative, and a number of projects were announced at Cuomo’s June broadband summit. In the North Country, the region’s development agency and Slic Network Solutions have partnered to expand existing systems to more homes and businesses.

Niagara and Orleans counties have partnered to undertake a similar project and will look to make high-speed Internet available in every part of the largely rural region. They announced this week that the companies Seneca Solutions and Resolute Partners would be handling the build-out, which will cost upwards of $5 million.

Other nearby counties are also positioning themselves to take advantage of funding from the state or other entities. Allegany County, another sparsely populated county southeast of Buffalo, voted to establish a not-for-profit to manage a universal system in an effort to expand access in late July.

Erie County Legislator Patrick Burke and some of his colleagues, with the help of Erie’s Environment and Planning Department, have been working to position the county for eventual broadband upgrades.

As Burke sees it, broadband will only become more necessary and continue to require infrastructure improvements. He says preparation is key to reducing future costs and taking advantage of funding opportunities that will make the county more appealing to potential backers.

“Whichever municipalities or governments, or even private entities, are prepared and are in line to be competitive with this, they’re the ones who are likely to see the funds that are available,” Burke said.

To that end, the county legislature’s broadband committee has been working to be as ready as possible for any such opportunities. They put together a white paper earlier this year with the help of industry experts, something Burke says helped him sell the importance of universal broadband to Erie County Executive Mark Poloncarz and other county legislators.

“We will have to do new infrastructure, there’s no doubt about it, and it will probably be significant,” Burke said. “But we do have a significant amount of assets already in place.”

The legislature also approved a resolution to fund a study that will outline the best way to implement such a system. The study will include the creation of an “assets map”—an inventory of existing broadband fiber networks and other infrastructure that could be used in the expansion of the system.

In addition, the county submitted a letter of intent and a consolidated funding application to Empire State Development.

“At some point this has to happen,” Burke said. “There’s no doubt that it’s going to happen. I think the longer we wait the more it’s going to cost us in the future.”

Meanwhile, the county can continue to lay the groundwork— literally—for universal broadband. County crews plan to install conduits for fiber-optic cable whenever there is roadwork or other projects that require digging, Burke said.

“Say it’s going to take three years to build up the scope and start the project,” Burke said. “That’s three years of digging and laying conduit that we can do right away to save an incredible amount of money.”

Poloncarz included the push as one of the tenets of his Initiatives for a Stronger Community, the plan he unveiled earlier this year to combat poverty.

He said that so long as upstate lags behind in Internet access, its citizens will find it harder to climb out of poverty, as they have a harder time accessing information and businesses are less likely to locate in a place that can’t support their information needs.

“It’s a problem, because if you’re a business leader and you want to expand, but you know you don’t have access to high-speed Internet, broadband, in particular areas of the community you’re never going to go there,” Poloncarz said. “You’re never going to look at those as options to put your business.”

And access is most limited in places where poverty is high.

“If you do not have access to high- speed broadband Internet you’re going to be behind the eight ball in many different ways, including education,” Poloncarz said. “It basically relegates certain parts of our community into second-class status.”

The push for the expansion of broadband systems has found bipartisan support at every level of government.

US Rep. Chris Collins, a Western New York Republican who sits on the congressional Communications and Technology Subcommittee, also believes the expansion of the broadband system is a wise investment.

“The (need for) expansion of rural broadband is substantial, especially when the businesses and homes are spread out as much as they are,” Collins said. “You don’t have the density out in the farmlands and the rural areas. There, frankly, has to be a government role.”

The expansion of broadband not only makes information more readily available to citizens, Collins said, but it makes the state more business friendly.

“I certainly support pretty much any and all activities to actually bring broadband out into our rural communities,” he said.

Justin Sondel appears via a content-sharing agreement with City & State.