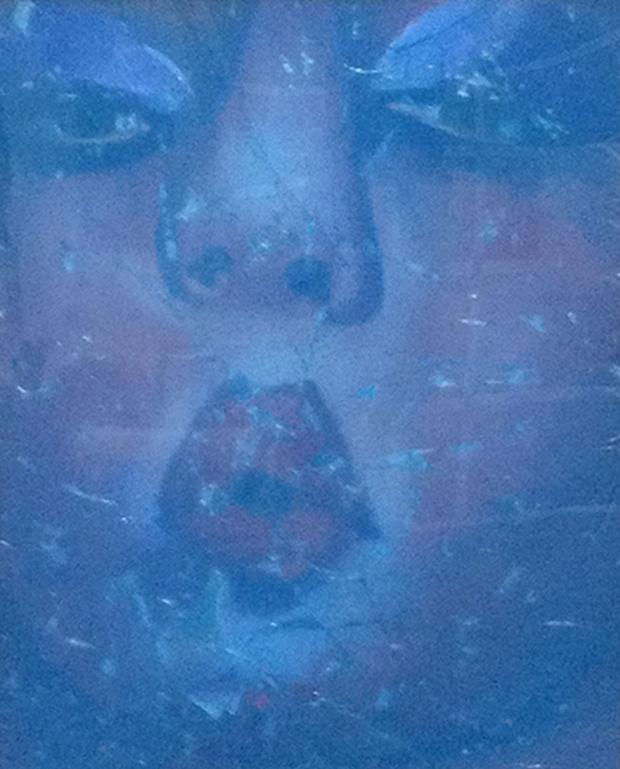 The Rick Williams art exhibit at Casa de Arte is entitled Infinitely Complex. It is interspersed with images of the cosmos. Night sky black with myriad color specks of what might be planets, stars, solar systems, galaxies. The cosmos images function as background to his even more complex real subject, the human brain.

The work is about brokenness—as that term is used to describe the human condition—and healing of the brokenness. Or not. Strategies of denial and temporizing to avoid recognition of the brokenness. And sometimes fatal consequences of such strategies.

The artwork reflects Williams’s experience as a MASH corpsman in Vietnam, then working in a Veterans Administration hospital psychiatric ward, then as a lawyer and judge adjudicating cases involving physical and mental disorders, as well as his personal struggles against similar such demons. “I’ve seen mental illness from every perspective,” he says.

Many of the paintings are on glass mirrors—usually shattered—overlain with clear Plexiglas and a blue film coating that obscures but does not completely conceal the paintings underneath, as well as holds the shards of broken mirror in place. The idea with the mirrors seems to be that the painter as he paints sees himself in the painting. (Indeed, as Williams told me when I viewed the show, several of the paintings are self-portraits. It is hard to perceive this without being informed of it, due to the obscuring effect of the blue film overlay.) The idea with the shattered mirrors is the existential brokenness idea.

Another idea with the blue film overlay seems to be about how we mask and obscure the brokenness. The denial and temporizing. With alcohol, drugs, whatever addictive substances or practices.

This is not pretty picture art. Among the paintings and several sculptural works are some videos. One showing the artist—no blue film overlay here—in the throes of delirium tremens. Williams said this was a staged performance, not the real thing, but that he’s been there.

And all in all as much emphasis on non-survival as survival of the mental and emotional difficulties and addictive strategies. Two sculptural pieces are essentially coffins, with Plexiglas and blue film covers. One with a barely visible—through the blue translucent cover—emaciated-looking facsimile corpse. The title of the coffin piece is Bulimia: Dead at 32. Other works refer to other medical/psychological conditions (depression, bipolar disorder, post-traumatic stress disorder) and the self-destructive actions (rapid or protracted) they can lead to. A painting not under blue film overlay is entitled Juan Carlo Ruiz Morales: Untreated Depression; Death by Suicide, age 54. He looks like he could be 84. An adjacent full-length portrait of a beautiful young woman, tall and straight, is entitled Masheka Wilson, model, Death by Heroin Overdose at age 41.

In the artist’s case, early Catholic religious experience gets some of the blame. An enigmatic painting entitled Requiem for My Sexuality depicts a nude female—homage perhaps to Titian’s nude, or Goya’s, or both—and Catholic nuns in black and white habits in a line approaching the prostrate nude as if viewing a corpse at a wake. Another work—in part in homage to Dali—is a large crucifix with a double strand of hemp rope in the Christ role.

Another video is called Mario T: Death of an Addict. Actually, not quite death, almost death, Williams explained. A video slide show of photos of his son, he said, proceeding backwards from his young adulthood and what looks like drug and alcohol and attitude problems, to childhood sweet innocence. How did it happen? Part of the answer, it seems, we pass things along.

Another concurrent theme is Williams’s lifelong devotion to the study and practice of art. Several of the paintings under Plexiglas and blue film are self-portrait remakes of some iconic paintings of the Western tradition. Watteau’s Pierrot, Manet’s Absinthe Drinker. Some of these works are further obscured by a further overlay of a black lace fabric.

The exhibit continues through August 16. A reception is scheduled for August 16, 2-6pm.