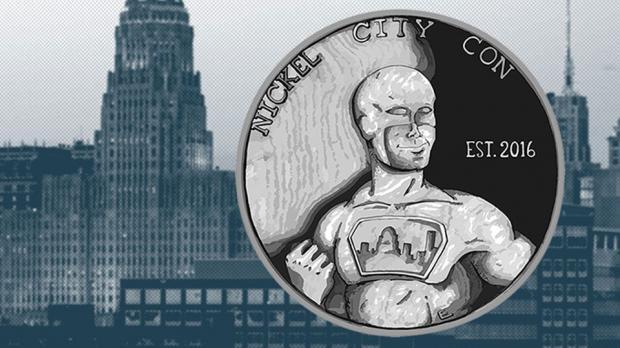 With attendees in mind, Martin and company were meticulous in vetting guests for the Nickel City Con. Drawing a crowd is important, but a reputation for engagement and fun were key when choosing their list of stars, which also includes actors Brett Dalton (Agents of S.H.I.E.L.D.), Larry Thomas (the Soup Nazi from Seinfeld), and Christopher McDonald (Shooter McGavin from Happy Gilmore) who we had the honor of speaking to this week.

Yes, Chris McDonald has been in everything. All of the movies and most of the TV shows have featured the New York City native in some role at some point.

Okay, so it might only feel that way, but the point is McDonald is extremely prolific, with over 189 acting credits spanning his career. He can currently be seen on HBO’s Ballers, playing an owner of the Dallas Cowboys, and he is cast alongside Nathan Lane in the Front Page, set to debut on Broadway in October.

With such a busy schedule, McDonald is just now finding time between acting gigs to make the rounds on the bustling comic con scene, where his iconic roles in Happy Gilmore, Thelma and Louise, and Quiz Show have made him a popular attraction.

A diehard Bills fan, McDonald relishes the opportunity to visit the city this weekend, when he will be a special guest at the first ever Nickel City Comic Con at the Buffalo Niagara Convention Center August 13-14.

Your name has started to pop up recently on the “special guests” list for these comic con events. What has it been like to get involved in this scene?

I just started a couple of years ago. I’ve been invited (to work comic cons), but I was always working. This year, I’m about to go into a play in New York. So, I know that I’m going to be sold to the company store on Broadway for six months so I won’t be able to do anything. So, I just wanted to reach out, (and) especially because they said Buffalo—I said absolutely, because I had been up in Niagara and had a good time, and I just love that Western New York thing. It feels great, to be honest with you. People will come up to me and ask me for a picture of something I did maybe 25 years ago and I’ll say, ‘Man, I just sold out. Note to self: Get a picture of SLC Punk’ or something. So, I’m getting better and better at it and I love the interaction and I love the people.

Some convention attendees can be intimidated or flustered when meeting their favorite celebrities. Do you have any tips for folks who want to make the most out of their celebrity meeting experience?

I know it can be a little bit daunting when someone will come up and start quoting all these lines from their favorite movies they’ve seen you in and stuff like that, and if there is a line, it becomes a problem. So I guess the perfect way is to come in, take a picture, we will sign it, and we’ll have a selfie together… It’s like that Chris Farley thing on Saturday Night Live, “Remember that time when you were in that thing and you were driving your car, remember that?” You don’t want any of that action, but you get it anyway.

Who seems to attract the most attention from fans at the comic cons you’ve been a part of?

What I get blown away at, I’ll tell you thisis the lines for the Walking Dead. Zombie lovers are lined up around the building to get a picture from some guy with his eyes drooping out of his head. I don’t get that personally but more power to them. I was just absolutely blown away.

To many people, you are closely identified with the Shooter McGavin character from Happy Gilmore. I often hear actors, like the guy who played Urkel or the guy who played Screech, sounding bitter about being referred to by their character’s name. I don’t get the impression you feel that way.

Chris McDonald will be on hand both days at the Nickel City Con, Aug. 13-14 at the Buffalo Niagara Convention Center.