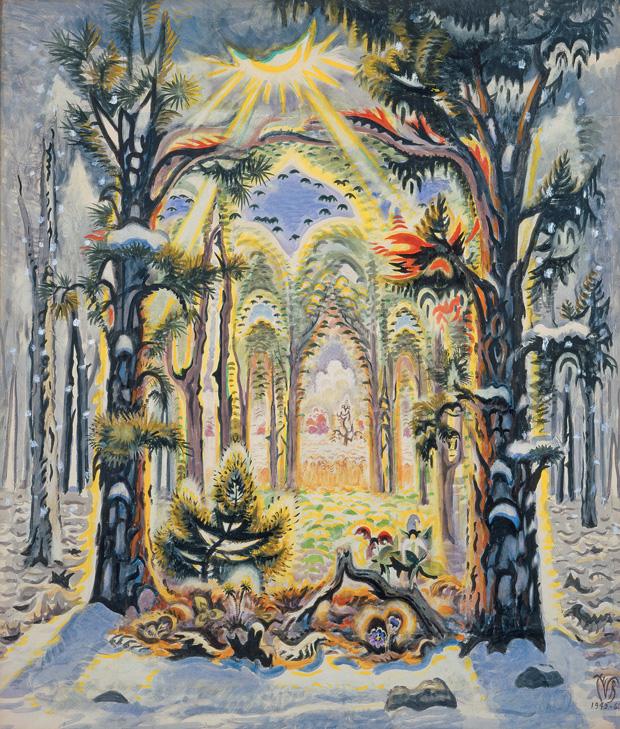 Artist Charles Burchfield was an environmentalist a century before the present crisis moment. One of his watercolors in the current exhibit at the Burchfield Penney, Abandoned Coke Ovens, from 1918, shows several open-pit ovens looking like black scars on the earth—open wounds—amid a devastated landscape of scrub vegetation flatland and background gray hills streaked with wind and water erosion patterns. On the crest of the hills is a row of what look like abandoned dwellings of the former coke operation workers. One or more of the buildings display Burchfield’s signature house personification effect. Façade as a human face, windows as eyes, central door as a gaping mouth. The most prominent of the former dwellings—and most clearly personified, and conspicuously overlooking the desolate environmental scenario below—has a look reminiscent of the iconic vision of terror or horror face in the Edvard Munch painting, The Scream.

Wall text quotes 18th-century Irish statesman and essayist Edmund Burke from his Philosophic Inquiry into the Origins of Our Ideas on the Sublime and Beautiful. His formulation that “Whatever is in any sort terrible—or is conversant about terrible objects, or operates in a manner analogous to terror—is a source of the sublime. That is, it is productive of the strongest emotion which the mind is capable of feeling.”

Devastation of the natural environment by forces of industrialization as terrible and horrible to view and contemplate, but at the same time source of aesthetic effect—source of beauty—of the highest order.

A painting in progress—but progressed enough, and accompanied by several preliminary sketches—entitled Storm Over Irondale is a view from a distance of a complex of iron industry factories spewing smoke we can see and other pollutant forms we can’t into what would have previously been a bucolic valley and mountains landscape near where Burchfield grew up and spent his early career in Salem, Ohio. In notes to himself on one of the sketches, Burchfield details the visual effects he is at pains to render, and expresses the abstract philosophical matter as articulately as Burke, but in concrete terms. “Void of blue vaporous gas from brick kilns. All kinds of tawny colors, hot grays fill the heavy sky…Heat waves rise from the ground…The void of life of this valley is awful to contemplate. Yet it is gripping. The raw shattered trees sparsely covering the harsh clayey hills—raw green and harsh yellow—smoke blackened places. Life at Irondale is hideously raw, crude, and primitive. It is splendid in its very brutality.”

Mining—coal mining—coal mines—becomes a kind of subtopic of the exhibit. As simultaneously injurious to the environment and partaking of the sublime. Here and there around the gallery are some actual coal mine maps—industrial real world depictions of surface and depth without the least aesthetic pretensions, but no less aesthetic items for that, or perhaps more so, without pretensions—courtesy of the Ohio Department of Natural Resources.

Illustrational work Burchfield did for Fortune magazine during the Depression includes series on the Pennsylvania Railroad, the national chemical industry, and the coal industry. One of the illustrations for the coal industry piece—here on show—was for some reason never used in the magazine. An unmitigated blackness on blackness view into a tunnel into a large coal seam, and jagged coal rock face around the tunnel entrance. Pure negative sublime. (Reminiscent of the black depths of inscrutability Gustave Courbet seminal work in the Albright-Knox, called La Source de la Loue.)

But without forgetting or overlooking environmental loss. A rather late work, entitled Cattaraugus Canyon, completed in 1957, that seems at first glance a mountains and valley spectacle nature scene in subdued but ostensible vitalist mode, on closer view seems more about an insect-borne blight destroying the Eastern hemlock major component of the mountains forest. Smoke from a brush or forest fire rising in the distance represents a further possible threat to the already devastated hemlocks.