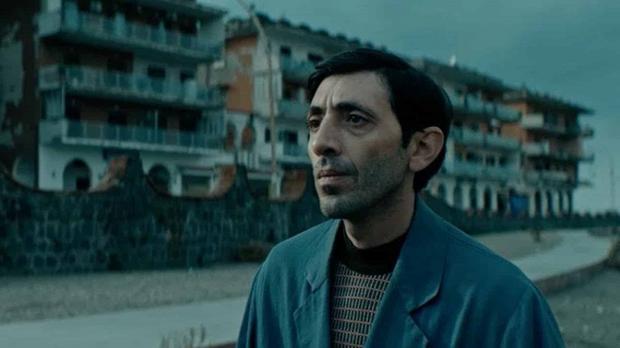 As summer starts to wind down, the death grip of Disney product on area theaters finally loosens, making room for some films that are not about superheroes or talking animals.

The title Dogman on a theater marquee may well make some potential viewers write it off as another in those escapist genres. In fact, this Italian drama is the latest film by director Matteo Garrone, best known for his 2008 gangster epic Gomorrah. The title refers to its protagonist Marcello (Marcello Fonte), a runty guy who runs a shop where he grooms and boards dogs. The setting is a rundown seaside town that looks like an abandoned resort. Marcello is a divorced dad with a young daughter, and because she likes to take vacations he does a side business dealing cocaine.

This brings him into contact with Simone (Edoardo Pesce), a hulking brute who is the terror of every local merchant. You could call Simone Marcello’s best customer, except that he has long since stopped paying for his product. Simone finds it convenient to bring Marcello along as a driver on criminal excursions, and the mutt is unable to say no, even when he gets stiffed on his share of the loot.

Something has to give, and we expect Dogman to be the story of Marcello finally standing up on his hind legs to reject Simone. But along the way the relationship between the two men becomes uncertain. When Marcello passes up opportunities to rid himself and his neighbors of this menace, we start to wonder, is he being bullied, or does he find some enjoyment in these walks on the wild side? Or does he simply have the blind loyalty of the animals that otherwise fill his days?

Some reviewers have read Dogman as a parable of fascism, an easy thing to do for so many films from a country that gave itself over so spectacularly to that vice in the 1930s. I found it more enjoyable as an atmospheric character story, thanks to the performance of Fonte, who was named Best Actor at Cannes and numerous other European festivals. Garrone originally wanted Roberto Benigni for this role, for his ability to combine humor with pathos; the unschooled Fonte is able to provide those same qualities without the hysterical mugging Benigni often slips into. Dogman will be screened at 9:30 pm nightly this week at the North Park.

Like Dogman, Tel Aviv on Fire has a title that, in and of itself, is likely to give you entirely the wrong idea what kind of movie it is. Expectations will further be muddied when I tell you that the film takes place against the history of the Palestinian-Israeli conflicts. Does any of this prepare you for a lighthearted comedy? If it does, you’re more of a free thinker than I am.

In Sameh Zoabi’s film, “Tel Aviv on Fire” is the title of a popular nighttime Arab soap opera that is watched by both Palestinians and Israelis despite it’s pointedly anti-Zionist bias. Set “six days before the Arab-Israeli War,” it concerns a plot to prevent the war by having a beautiful Palestinian agent seduce an Israeli army officer and steal the plans.

Salam (Kais Nashif) is a slacker who gets a job on the show (thanks to his uncle the producer) as a production assistant: he is a resident of Jerusalem and his knowledge of Hebrew allows him to correct the dialogue for the show’s Israeli characters. Being in the right place at the right time brings him a promotion to writer, a job he’s not suited to. Being in the wrong place at the wrong time puts him in the hands of Israeli border crossing officer Captain Assi Tzur (a drolly funny performance by Yaniv Biton). Assi’s wife watches the show, and he has his own ideas how it should proceed. He agrees to let Salam go free if he will let him help script the show’s future episodes, though his ideas are markedly different of the show’s financial backers.

Confused? It plays more smoothly than my description, with a blithe tone that coasts over the script’s less plausible aspects. It’s not big on belly laughs, but its genial illustration of the belief that all of these people are more similar than they are different makes it a most pleasant way to spend 100 minutes. Now showing at the Dipson Amherst Theater.

Also opening this weekend are two sports documentaries: Maiden (sailing) at the Dipson Eastern Hills and Heading Home: The Tale Of Team Israel (baseball) at the North Park.