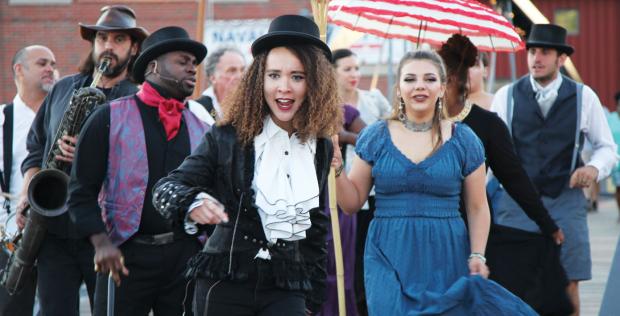 In a press release for the Wedding of the Waters, Friends of the Buffalo Story state: ”In our continued effort to bring “The Buffalo Story” to new and different audiences, Wedding tells the story of the construction and the completion of the Erie Canal in a totally contemporary vernacular.” Each Monday in August at 8pm, the Friends of the Buffalo Story will present this original performance piece inspired by the Erie Canal, which was constructed between 1807 and 1817 wed the Hudson River with Lake Erie, creating a navigable waterway that connected the greatlakes and the Atlantic Ocean. This story—also inspired by the hugely successful Broadway musical Hamilton, which has changed they way many audiences and critics view musicals as a form—is told through dance, spoken word, and performance art by a diverse cast of actors, dancers and musicians including local artists, including Edreys Wajed, the 12-8 Path Band, Aurora Borealis, Folk Song Trio, Stonehorse Lone Goeman and dance troupes Aerial Verde and Verve Dance Studio. The performances will be held outdoors, at the Ruins and at the Commercial Slip at Canalside, locations which are an integral part of the story and performance itself. No tickets or reservations necessary, just wander up and enjoy the show. Above, view photos of last week’s performance.