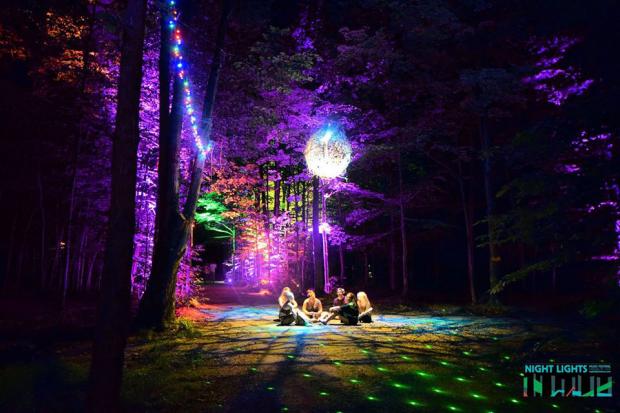 Three weeks out from Night Lights Music Festival and the Mayor of Fun is day dreaming of jam bands and LED lights. The Mayor of Fun, a name given to him by a friend, is also known as Brian Enright and he is the founder and one of the main organizers of the music festival, which is now in its sixth year. “If you have a question that needs an answer that nobody else can answer, I’m the guy you talk to,” says Enright. And I do have some questions for him, mostly about the history of this unique festival which takes place on the Heron Festival Grounds in Sherman, New York. Each year the trails at the Heron are decorated with thousands of LED lights, set up by lighting professionals as the backdrop to what has become a three day festival featuring more than 30 bands. Headliners this year include Dopapod, Papadosio, Aqueous, Jimkata, Bright Light Social Hour, and a slew of local and regional bands. This week we talked with Enright about the challenges and rewards of doing this festival, and the philosophy behind the jam band-packed line up.

Tell me about the origins of Night Lights.
The festival originally started with the band Lazlo Hollyfeld. I was really good friends with those guys, I went on the road with them a couple of times. We’d always talked about running a weekend festival, but we never really pursued it until they were invited to play at this thing called Night Lights at the Heron. Basically on Friday and Saturday nights they’d have a band or two play on what we call the Cafe Stage. It was run by this guy Doug Sitler. So Lazlo was invited to play that and they asked me if I’d go with them. I went there and checked out the property, saw the set up and was totally blown away. I had never been to the Great Blue Heron Festival, I knew nothing about the grounds, I was just walking into it like a complete virgin and I was just blown away by how awesome and pristine and gorgeous the property was. Over a couple of months, Scott Molloy, the keyboardist of Lazlo, and I talked about what we could do with Night Lights at the Heron and we pulled together a business plan for a festival.

When was this?
February or March of 2011 is when I pitched the business idea to Doug. The idea was to have a weekend festival where we have 15 bands over two days and utilize the Heron grounds. We thought an incredible addition to the festival, to any festival, would be the night lights. Then that following September is when we started the festival. We started as a fall music festival but have continually moved the festival up because low 40s and rain does not equal a good time.

What goes into the art installations and the lighting aspect of it?
A lot of LED bulbs. Miles of electrical cordage and lines. It’s now morphed into a combination of lighting professionals who have put in sections of the trail for us. Generally speaking, we start setting up the week of the festival. I know there are some lighting pieces that stay down there for the whole summer.

What’s the most challenging part about doing the festival each year?
Weather. No doubt about it. You can put together the greatest line up of bands, with the greatest staff, but if it’s nothing but thunder and lighting for the whole weekend, that’s tough to contend with.

What’s your favorite part of doing this?
Working with people at the Heron and all of their core staff members, and then Doug and his wife Anna—really I enjoy more than anything working with the people that produce the festival and the volunteers that come and work their butt off all weekend to make it successful. Without the community support and people pitching in together we would never be able to do it.

How has the festival evolved?
It has evolved tremendously. When we first started, we had 11 bands over two nights all on one stage. Now it’s, I donno, 30 plus bands over three days, three different stages, craft vending, food vendors. The first year, if we had 75 people there, that was incredible. Now we’re talking anywhere from 1,200 to 1,500 people there. Even though we’ve grown tremendously, we’ve worked really hard to make sure it’s a safe, all inclusive environment. There’s free water, tickets include camping. We don’t want people to worry about that stuff.

What’s the philosophy behind the line up choices?
More than anything we’re trying to make sure that people are seeing bands that they’d only see in large concert venues like the Town Ballroom as headliners. We want people to see them in a really cool intimate setting outside of that. Then really working with local music and celebrating the diversity of the local music scene between Erie, Jamestown, Cleveland, Pittsburgh, and Buffalo, Rochester, Syracuse, and Albany. Making sure we’re presenting a musical slate that represents us as humans that are putting the festival together.

Speaking of local acts, one of the headliners is Aqueous from Buffalo and they’re doing three sets.
Yes, they did that last year too—last year was the first time we did three nights. The local music scene really appreciates them and supports them, which is awesome. We’ve done a lot of goofy stuff with them in the past like scavenger hunts. We did a really bone-headed truth or dare video with Community Beer Works and one of the guys in Aqueous, which was hilarious. They’ve played five of the six years.

Is there anything else you’d like to add?
The grounds speak for themselves. They’re magical. We’re thankful to host this in conjunction with Green Heron Growers and Sitler HQ, and super excited to introduce Community Beerworks to this conglomerate. The last thing I want to mention: We as a music community often talk about the importance of environmental stewardship, and Rainbow Recycling and the Heron live it day to day. They keep the grounds spotless. There are garbage and recycling centers everywhere. One of the best compliments we ever received came form someone who said that everywhere they wanted to toss a beer can there was a recycling center there. We just want to remind people to please do your part, clean up after yourselves and lets return the grounds cleaner than when we got here.