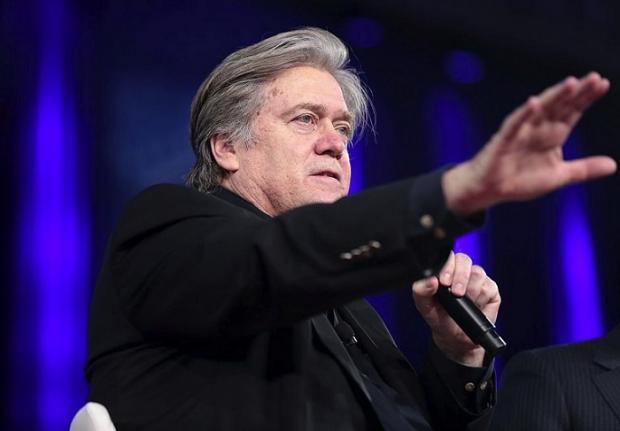 After being cast out of the White House and Breitbart News, Stephen K. Bannon, often referred to as the mastermind of Donald Trump’s presidential campaign, has vowed to remake Europe. His organization, called “The Movement” and based in Brussels, aims to unite Europe’s right-wing populists and take down the European Union in its current form.

Bannon sees this effort as part of a “war” between populism and “the party of Davos,” between the white, Christian, patriotic “real people” (in the words of his British supporter, Nigel Farage) and the cosmopolitan globalist elites. In the media, at least, Bannon is taken seriously.

It would seem to be a tall order for this permanently disheveled American media blowhard and promoter of cranky ideas about cyclical cataclysms to change the history of Europe. Despite meeting such right-wing luminaries as Hungary’s strongman Viktor Orbán, Italy’s Deputy Prime Minister Matteo Salvini, and Boris Johnson, the clownish former British foreign secretary, all of whom wish him well, Bannon has almost no experience in European politics. He stunned a sympathetic audience in Prague by ranting against “unfair competition” from foreign countries that use cheap labor. Much of the Czech Republic’s GDP comes from exports, for just that reason.

But the main problem facing Bannon’s effort is that right-wing populist leaders are a disparate bunch. Bannon himself is a Catholic reactionary with fantasies, fueled by his love of Hollywood heroes, of being a warrior against the forces of evil. Orbán is an autocrat who exploits popular disillusion with post-communism by blaming immigrants and the EU, even though the Hungarian economy depends on the single market and subsidies from Brussels.

Northern European demagogues, like Geert Wilders, see Islam as the main threat to Western civilization, but defend such causes as gay rights (because Muslims supposedly hate them). In Britain, Johnson stands for, well, Johnson, but his fellow Brexiteers are less interested in the Islamic threat than in a grandiose version of English nationalism. France’s National Front, now called the National Rally, is a Le Pen family enterprise trying hard to dissociate itself from its anti-Semitic, Vichyite roots.

As was true of European fascism in the 1920s and 1930s, it is not easy to find much ideological coherence in these various political strands, let alone in Bannon’s Movement. What they all have in common, however, is reliance on animus, sometimes directed at Muslims, sometimes at any kind of immigrants, very often against the EU, and always against the liberal elites—whom British Prime Minister Theresa May described as “citizens of nowhere.”

There is something conspiratorial about this animus, a notion that the common man is at the mercy of a shadowy network of string-pullers that rules the world. In the days when Stalin identified enemies of the people as “rootless cosmopolitans” (meaning Jews), the headquarters of this omnipotent global network was thought to be New York, with branch offices in London and Paris. Now it is located in Brussels.

Immigrants, particularly from Muslim countries, bear the brunt of populist propaganda. Bannon wrote the first draft of Trump’s so-called Muslim ban, barring immigrants from several predominantly Muslim countries. Orbán has fortified his borders to protect “Christian civilization.” Salvini wants to deport all illegal migrants from Italy. The Brexit campaign, led by Johnson, warned British voters that their country would soon be “swamped” by Turkish immigrants, even though Turkey is nowhere close to joining the EU.

But however unpleasant anti-immigrant rhetoric and policies may be, the main target of the populists’ ire remains the sinister globalist elite, represented by George Soros and other liberals whom they accuse of promoting human rights, compassion for refugees, and religious tolerance to further their own interests. They are the ones who are supposedly swamping Christian lands with aliens. They are stabbing Western civilization in the back.

Bannon has actually expressed admiration for Soros, even though he sees him as a kind of Satan. He wants to be the Soros of the right.

It might seem ironic that radical nationalists, like Bannon, should be seeking to unite in a global movement, as though they were mimicking their internationalist enemies. But the populists’ goal is not to destroy elitism; it is to replace the old elites. Hence the common language of self-pity, as though Orbán, Salvini, Wilders, and the rest were being oppressed by the “Davos Party.”

Often from marginal backgrounds, they feel excluded, insufficiently recognized, even looked down upon. It is their turn to rule, they believe—and to exact revenge for all the slights they think they have received on the way up. This is why Donald Trump, the uncouth property developer with a huge chip on his shoulder, is their hero.

Trump clearly feels more comfortable speaking to dictators than democratically elected leaders. He likes the idea of one strongman dealing with another. But this doesn’t make him an internationalist, any more than jamborees of European right-wing populists make for a coherent international movement. These are occasions for mutual flattery and strutting in front of the cameras.

Whether the populists can do more than that—collectively bring down the EU and reorder the Western world—is hard to tell. Given their diverse interests, rivalry may cause them to splinter. For example, whereas Trump and Bannon see China as the great global enemy, Orbán has been greedily accepting any Chinese money on offer. And the English nationalists are driving their country into a not-so-splendid isolation.

A true “nationalist international” can emerge only when such contradictions are addressed. But wherever the global right ends up, it is unlikely that Bannon’s Movement will be the vehicle that gets it there.

Ian Buruma, editor of the New York Review of Books, is the author of numerous books, including Murder in Amsterdam: The Death of Theo Van Gogh and the Limits of Tolerance, Year Zero: A History of 1945, and, most recently, A Tokyo Romance.