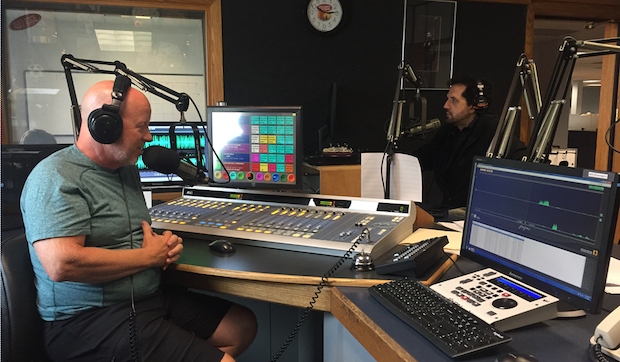 George the rhino from The Buffalo Zoo attempting to pick the Buffalo Bills first round quarterback draft pick. A person getting hit by a car attempting the Drake “In My Feelings” challenge. A death metal version of a thunder snow weather forecast. An STD bracket challenge during March Madness. All stunts, news, and features brought to the Buffalo public through local radio.

Ted Shredd and Tom Ragan are no strangers to the radio sphere. Their characteristic blend of news and comedy has been entertaining Buffalo listeners for over two decades on 103.3 The Edge, as their moniker, Shredd & Ragan.

When listeners tune into the duo’s show on weekday mornings, they can expect plenty of laughs, interviews with comedians, entertaining news stories, and an infectious camaraderie between the two radio show hosts.

Both Shredd and Ragan have had separate starts in the radio industry, but found their way into the Buffalo arena together, and remained.

Shredd grew up in Elgin, Ill., and had his first taste as a broadcaster when he started as a little league baseball announcer at the age of 13. Throughout high school and college, he took part in the school radio stations, and was a music director, as well as an on-air weekend jock. With those experiences, Shredd knew radio was what he wanted to do with his life.

But, Chicago was a large radio market, and Shredd couldn’t find a job there. On a whim, he decided to move to Lake Tahoe and immediately contacted every radio station in the area.

One radio station needed someone to do the midnight shift, and Shredd was prepared to make that shift his audition. From there, he was hired, and worked his way up in the radio world. The person he worked for at the time took a job in Buffalo, and then reached out to Shredd to come to Buffalo and work overnights. Shredd then moved to Buffalo, and produced the Taylor and Moore Show on 103.3 WPHD, which later became The Fox, and now The Edge.

Ragan grew up in Pennsylvania, and was inspired by his father who was a football broadcaster. Ragan helped with scoring and as a spotter, setting up the broadcast with his dad, and helping with the statistics. He continued spending time at the station and was given a job doing overnights. But, his ultimate goal was to do mornings, with the same Howard Stern and Don Imus-inspired humor that he grew up listening to.

Ragan sent audition tapes to many radio stations, and his chance at a radio career opened up when Tom Burns, who was the program director’s assistant for WGR, pulled Ragan’s audition cassette tape out of a box of many auditions. Burns liked what he heard, and gave it to the program director. The station wanted to have a show in the afternoons, and Ragan was hired.

Though Shredd was working at The Fox at the time, and Ragan was working for WGR, both stations were owned by Rich Communications, under the Rich Products Corp. umbrella, and the pair was placed together, with a one-year contract to start. That was in 1994.

That first year of their show was an eventful year in local and national news and they were able to bring plenty of information and stories to life with the death of Kurt Cobain and the O.J. Simpson scandal. This was also at the time when they received their news via teletype, a typewriter-like device that would automatically print out news, weather reports, sports, and entertainment. The Associated Press would send these stories all day long, and they would have to sift the large amount of printouts for news for their show.

From the start, the spirited friendship between the duo was easy to tell, and even shows through with their relationship off the air as well. With any spontaneous news story or joke that one of them may bring up during their four-hour show, the other is on standby ready with another joke and witty comment, and an organic laugh fest ensues for them, as well as for the audience.

The duo realizes the first few years of starting a radio show and building an audience are the toughest, but they prevailed.

“If you can make it there for a while, you can have some longevity,” says Shredd. “The hard part is getting past those first couple years and breaking in.”

24 years later, Buffalo listeners are still coming back for more. Over the many years that they’ve been on air, the duo has had many memorable moments through their careers.

The co-hosts interview various comedians including Todd Glass during the Shredd & Ragan garage sale, Tom Green, Lisa Lampanelli, and many others. They also entertain listeners with the Niagara Falls Police Blotter, attempting to unite Missed Connections, as well as playing OTF (Ohio/Texas/Florida), where they read off stories and a listener has to guess which state the story took place in. With the games and bits they do on-air, they invite listeners to share stories with them as well.

The team enjoys getting involved with larger local stories too. One of their most memorable moments dates back to 2006, when there was a toll booth at the Breckenridge and Ogden toll barrier on I-190.

Shredd and Ragan thought of ways to protest the toll, and encouraged people to pay with pennies. They set up a broadcast outside with politicians Kathy Hochul and David Swarts, and a “penny protest” ensued, with people honking and holding up signs, with the successful removal of those toll booths.

It is evident that the duo has a major place in the community. They love meeting people in the community, and their love of the community led them to host Halloween parties to benefit Variety Club, a nonprofit that serves the needs of sick, disabled, and underprivileged children in the Buffalo. With their efforts, they raised nearly $100 thousand—with all the proceeds benefiting local children.

Through everything they do, the goal is to make listeners laugh and put smiles on their faces. They credit being able to achieve this goal with the help of the two other members who comprise their show – their producer Jim Jacka, and assistant producer/Imaging Director, Evan James. Shredd and Ragan realize the immeasurable talent that Jacka and James have with the continuous creation of show content.

The four of them collaborate on ideas, and Jacka books many of the guests and does the prep work for the show. James helps with many of the stunts and off-site reporting that the co-hosts broadcast on air, including going to The Buffalo Zoo on Buffalo Bills draft pick day, where George the rhino had different hay bales to choose from with photos of the different quarterback options affixed to them, and broadcasting that George had picked Josh Allen as the winner.

“They are fantastic to work with,” said Jacka. “They will listen to whatever you’re trying to convey. They are not afraid to go with something obscure.”

Their recipe for success is that the four of them are not afraid to laugh with their content. If an idea makes all of them laugh, they go for it.

“Keep looking out for those stories that are fun to make fun of,” said Ragan. “Keep looking for things that might be interesting.”

Catch Shredd and Ragan are on air from 6am to 10am, Monday through Friday on 103.3 The Edge, and join them on Friday, Aug. 10 at Deep South Taco for the Shredd & Ragan Cruise Night Reunion, where there will be live music, contests, prizes, food, and beer.