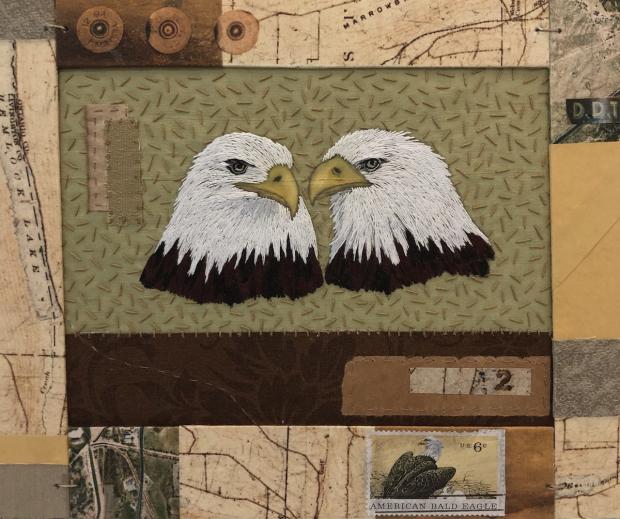 Bald Eagles by Marie Hassett, part of the artist's show at Art Dialogue Gallery.
by
Jack Foran
/ Aug. 8, 2018 11am EST

Henry Schmidt uses a mix of mechanical reference—straight edge and angle—and organic reference—undulate—forms to create his art deco look sheet steel columnar sculptures, usually consisting of twin riser segments that play alternately—in alternate examples—on themes of similarity and contrast. In an artist’s statement, Schmidt describes his work as about “harmony without narrative. Form is the subject,” he says. “The overall goal…is to create a direct perception of form as form.”

Amidst the metal sculptures, a few anomalous—and notably beautiful—works in wood. Such as a lovingly finished blond maple more or less column culminating in a form that plays on the title word Fluke, as one half of a whale tail, but also, perhaps, the fortuitously elegant original form of the matrix wood piece, that would have suggested the ever-impressive—often photographed—final glimpse view of a whale cresting event. Or a Noah’s ark with disk semi-circle hull and undulant gunwale, evocative in this case of ocean waves.

George Gilham refers to his nature views as “deconstructed landscape.” He likens the appearance of the works to things seen “at a glance, or as a blur…as colors, shapes, and small segments of structure,” interspersed with “areas of abstraction.” Monet would have understood. The paintings are uniformly diminutive in size—about four inches by six inches—except for one larger work mounted to stunning effect on a light box, called Illuminating Garden, Champaign, Ill. Showing what seems to be a lush flower garden and pedestrian bridge over water, reminiscent of Monet’s iconic impressionist depictions of his gardens at Giverny. Most of Gilham’s other locales are closer at hand. Letchworth State Park, Reinstein Woods, Zoar Valley, Canalside, and one work is called Sunflowers on Pavement Road, Lancaster.

In numerous also smallish—about eight inches by 10—paintings in a charmingly simple serene pictorial style, Marie Prince shows kids playing ball, playing music, playing on the beach, running, reading, biking, rolling hoops, and much more of the like. Somewhat of a romantic vision. Never fighting. Never hurting one another. But “at a time when violence is prevalent in our society,” she says in an artist’s statement, her works “reflect children having fun, getting along, and enjoying their young lives, as they play, think, create.”

Marie Hassett’s birds, she tells us, are meant as both “reminders of what has been lost and what is at risk of disappearance in the natural world…the species shown here are extinct or have been threatened with extinction due primarily to human actions.”

And regarding her meticulous fabricational technique, “I work with various fibers and found objects using repetitive stitching—not unlike the repetitive activity of nest building—to give form and detail to each piece.”

Labels consist of a synopsis title word and name in parentheses of the depicted species, followed by a short paragraph on the survival status—or alternatively, fate—of the species. Such as Remembrance (Carolina parakeet), and information that the species “once ranged over the United States as far north as New York. They vanished in the wild due to woodland destruction and ruthless hunting. The last pair…were cage mates at the Cincinnati Zoo for over thirty years,” but both succumbed within the past year or so.

Other synopsis title word Remembrance works are about the Labrador duck and the Pink-headed duck.

But occasional stories of hope, as that of the Peregrine falcon. Synopsis title word Presence, and information on how this marvelous avian—reputed to be the fastest member of the entire animal kingdom, capable of reaching speeds, in dive maneuvers, well over 200 mph—by the 1960s had become “an endangered species…due to widespread use of pesticides, especially DDT. Since the ban on DDT in the early 1970s, and due to conservation efforts” such as raising captive-bred birds to be released in the wild, the species “has made an impressive comeback.”