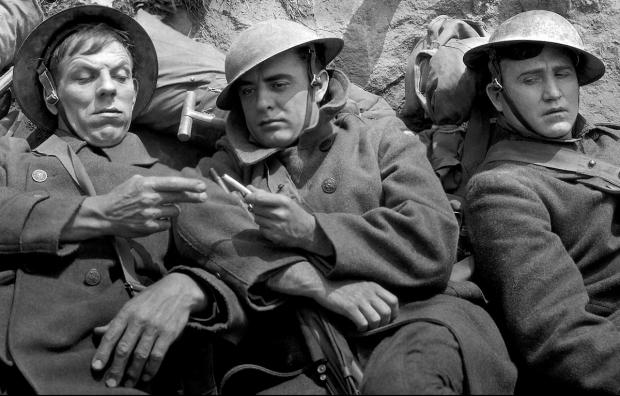 Catching up on the never-ending pile of magazines while on vacation last week, I got around to reading a New Yorker article called “How Superheroes Made Movie Stars Expendable: The Hollywood overhauls that got us from Bogart to Batman.” In it, Stephen Metcalf reviews some recent books on the current woeful state of Hollywood, including The Big Picture: The Fight for the Future of the Movies by the Wall Street Journal’s Ben Fritz. Dissecting the factors that led studios to invest just about all of their attention and capital in least-common-denominator special effects movies that will generate endless sequels, he sees little hope that theaters will go back to being an adult gathering place anytime in the near future.

Metcalf is surprised to report that, for all the work he did detailing what most of us would consider a downward spiral, Fritz in the end doesn’t seem too upset by it. Why? Because TV is so good these days. Fritz writes, “For those of us who simply want to sit down, turn off the lights, and be immersed in the magic of stories told in images on a screen, the future has never looked brighter.” That may be. But that’s like saying that the future for eating is rosy because of the rise of food trucks. I love food trucks, but they’ll never replace a sit-down meal at a good restaurant, where you can take your time and savor the experience with a worthy companion.

If there’s a bright spot to be found in the diminished role of movie-going in the American experience, it’s this: Digital distribution has made it possible for older films to be shown in theaters at a reasonable cost. That’s why the North Park Theater is able on occasion to offer a number of different films in a single week, and weekend matinees of classic movies or ones that wouldn’t otherwise attract a large crowd. It’s why the Eastern Hills Mall has been able to run a monthly series of classic films noir, and the Amherst Theater one of 1980s horror movies, both very popular.

And there’s the granddaddy of all of these, the Buffalo Film Seminars. Since the turn of the century, when UB professors Bruce Jackson and Diane Christian first opened up screenings of their film survey class to the general public, the BFS has screened hundreds of movies the way they were meant to be seen, on a bigger-than-life screen in front of a crowd of people, often to audiences who had never had a chance to see them that way.

As always, the fall series opens with a silent film shown just the way your great-grandparents saw it, with live accompaniment by pianist Philip Carli. It proceeds with some Hollywood classics, some foreign films, and a recent film or so that Jackson and Christian think will stand the test of time. Any movie on the schedule that you’ve never heard of should vault to the top of your must-see list: a new discovery is a gift from the movie gods.

Series tickets are available at a 15 percent discount, no matter when you buy them. (If you buy one in mid-series, when there are only seven screenings left, it will cost you the price of seven tickets minus 15 percent. Too much math? Let the ticket seller figure it out for you.)

Support this stuff! You’ll be sorry if it goes away.

October 9: The Gospel According to St. Matthew (1964, Pier Paolo Pasolini)