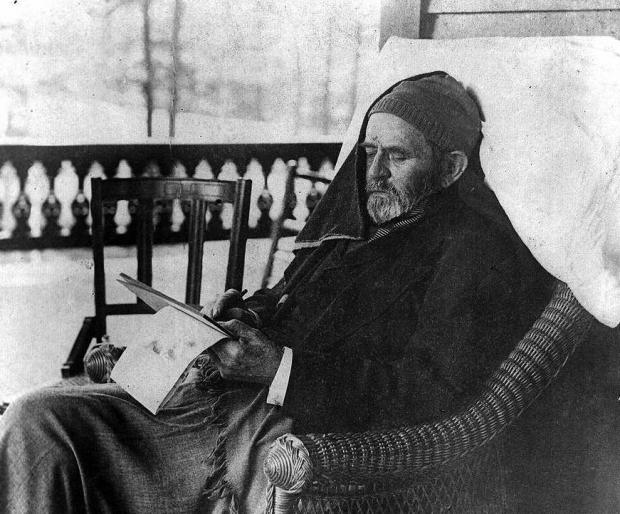 Ulysses S. Grant working on his memoir in 1885, shortly before his death. Historian Ron Chernow's terrific and worthwhile new biography of Grant will last you from the dog days into Indian summer.
by
Bruce Fisher
/ Aug. 7, 2018 2pm EST

Ulysses S. Grant’s autobiography is the people-pleasing winner and the surprise of prose styling that Mark Twain found it to be in 1885—but if you’re stressed and depressed about current events, there’s a lot more salve to be found in Ron Chernow’s 1,000-page Grant. If you can’t stay with Chernow’s narrative every step of the way through the immense detail of the Civil War (which is all that Grant himself addresses in his autobiography), then pick up the story at Grant’s presidency. Lovers of the Ku Klux Klan, and apologists for the Lost Cause, will not like being reminded how Grant smashed the former and ridiculed the latter. Chernow compellingly sets out Grant’s personal courage in completing his memoirs while suffering from cancer (cigars); likewise Grant’s blindness to swindlers and his binge-drinking. The good thing about taking the physical book to the beach is that, deep into the fall and winter (it’ll take that long to read it), all the sand falling from your book will remind you of sunny days.

But the best thing about Ulysses S. Grant’s story is simply this: Grant was a brilliant, flawed, devoted servant of all Americans who grew throughout his adulthood. When he had power, he used it to protect the vulnerable from the wicked. Yes, such people existed. We once had a heroic leader. Read all about him.

To really perk up your mood, and get that job done in only minutes, just read a single spreadsheet—actually, only about five rows and a dozen columns of a spreadsheet, in the brand-new study entitled “The Costs of a National Single-Payer Healthcare System,” by Charles Blahous of the Mercatus Center at George Mason University.

You will quickly see why Senator Bernie Sanders and other advocates of Medicare For All are jumping for joy.

The study was produced by a “conservative” think tank funded by the Koch Brothers. Ignore the headlines and the press release and even the study’s own prose, and go directly to Table 2, to the middle of the chart, and look at the rows labeled “Currently projected national health expenditures,” meaning what everybody—individuals and government—is expected to spend on healthcare in years 2022 through 2031.

On the next line, “Change in healthcare spending” under the Medicare For All plan, you see that the spending under a universal coverage plan is projected to lower than spending under our current system every single year. Then look at the next line, “Admin. cost savings,” and that number, too, is lower than under our current system every single year. Over on the right of the table are two numbers: -482 and -1572, denominated in billions with a B. Add them up and you get the 10-year projected savings to everybody if America were to switch from the current system to the Medicare for All plan.

The savings: $2.05 trillion. With a T. Even under Blahous’s assumption of six percent administrative cost versus today’s Medicare admin costs being just two percent of what it spends, Blahous finds that individuals and the government will together spend $2.5 trillion less under a national, comprehensive Medicare For All program

Don’t believe the liberal politicians like Bernie Sanders. Don’t believe the liberal economist like Paul Krugman, who argued for a Medicare for All system in a readable summary back in 2006. Believe this guy Charles Blahous, who just proved that he, too, has done the numbers. It should be safe now for “conservatives” and “liberals” both to endorse Medicare for All. A Left-Right consensus is just sitting there waiting for some brave soul to endorse it. Now go put some more sunscreen on.

If you already know enough about U.S. Grant to know that we need him back; if you already did the numbers and know that you should vote for whoever supports Medicare for All, then it’s safe to start several summers’ worth of Louise Erdrich’s North Dakota novels. Start with Love Medicine or The Plague of Doves or Tales of Burning Love or The Last Report on the Miracles at Little No Horse or Four Souls. Only then will you appreciate the richness and depth of The Round House, which won her the National Book Award in 2014. Critics have been carefully cool to her latest novel, Future Home of the Living God.