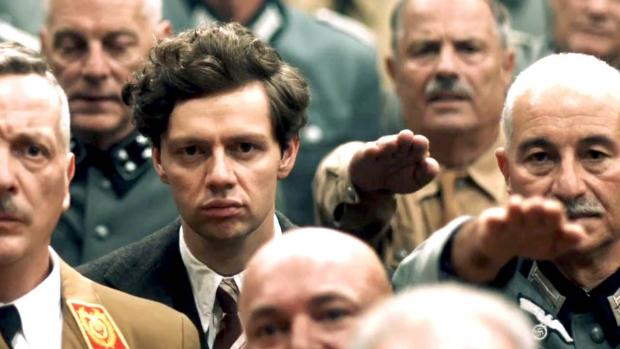 In 2005, German director Oliver Hirshbiegel made Downfall, a film about Adolf Hitler’s last days in his underground Berlin bunker as the Soviet Union’s army closed in on the city near the end of the Second World War. The movie was acclaimed by many in Germany and in Europe for its impact and accuracy, and went on to be a worldwide box office hit, gaining an Oscar nomination for Best Foreign Language Film.

His new release, 13 Minutes, is about a courageous man who sought to end Hitler’s murderous regime and prevent the war that the Fuhrer was about to cause. It’s unlikely to receive as much attention and acclaim as Downfall for reasons having to do with both the subject matter and the treatment.

In November of 1939, a woodworker from southern Germany, Georg Elser, planted timed explosives in a Munich beer hall where Hitler was scheduled to speak. The meticulously skilled one-man assassination attempt was foiled by bad weather conditions that caused Hitler to depart the hall thirteen minutes early. Captured, interrogated and tortured by the police and the Gestapo, Elser was suspected of being part of a conspiracy that seems not to have existed.

As subtly but poignantly and insightfully played by Christian Friedel, Elser’s unusual combination of striking intelligence and naive idealism is often persuasive. But the picture only partly conveys the difficult, interrupted development of his convictions and plans. Hirshbiegel and Friedel sometimes manage to dramatize and personalize Elser’s moral journey, told in very extensive flashbacks. But the usual difficulty filmmakers encounter in trying to portray thought and ideas is compounded here by some tentativeness and narrative gaps. 13 Minutes is finally compelling but too often obscure.