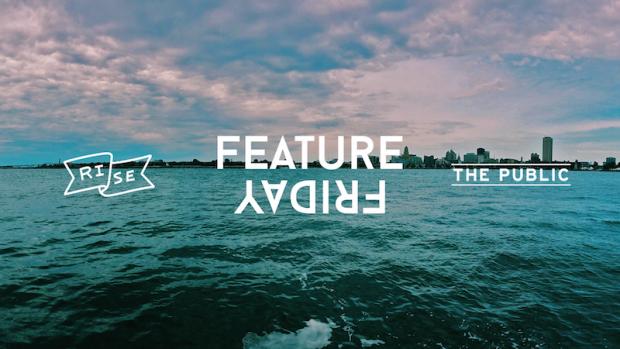 “Experience defines meaning and meaning defines art. The experience of Infringement of human bodies combines the presence of the artist with the public sphere. I gathered a group of willing volunteers to allow me to paint them. All volunteers were unaware of the idea behind this project, just as an outside spectator. They were only aware of the visual aesthetics and their own movement. Most of these volunteers were meeting each other for the first time that day (all nearly naked). I was using them as my visual experiment utilizing their feelings and interactions with each other and myself. I painted them all white-like a blank canvas or ivory sculpture. I gave them dyed strings of torn canvas to do what they want with on our walk from West Ferry and Chenengo to Elmwood and North. People were utterly shocked passing by; snapping photos, taking videos, and selfies.

It felt as though we were white ivory sculptures on display; objects of art, feeling the separation between the spectator and the art. The volunteers kept saying they felt as if we were walking for a cause. We got to the Co-Op house on Elmwood and North where my volunteers stood in a huddle. I mixed paints on site, soaked my shredded canvas, and tangled the wet threads as if I were creating a work in my studio. The threads of sopping paint were meant to symbolize the interconnectedness of people. My work usual includes torn apart canvas string as it provides a metaphor; web of human lives intermingling, and breaking out of tradition, reaching out to the spectator. The difference between this and my studio work was the painting could talk back to be and move freely. The work had many minds of its own. Although at first I had a solid idea of infringing, the experience of the volunteers, myself and the public ultimately defines the meaning of this piece.”

“This was taken in the West section of the Niagara River about two miles downstream of the City of—in between Grand Island and Ontario. A thunderstorm just barely missed us right before this was taken and facing the other way in front of the boat was the elusive double rainbow. I took this with my Galaxy S5’s camera and it turned out pretty well.”

Hanging out and doing some boarding on @chief_dailydabber’s boat today. @vrspec19 getting some air. #niagarariver #grandisland #sunset #buffalo #wakeboarding #air

“There are two great things about Buffalo: its Rust Belt aesthetic and its art scene. Both compliment the other in ways that make this city truly unique. It was Friday night, just outside the downtown area on Exchange Street. Artists Chuck Tingley and Rich Tomasello were hosting their invite-only private studio party on the roof of their rented space in an old factory warehouse. There were artists, educators, collectors, gallerists, and a good supply of booze. To the west we had the city skyline burning bright in lights and to the east, the slow rise of a full blue moon illuminating the Old First Ward.”

“Sad robot at the Essex Street Arts Center is one of the West Side’s hidden gems. Anchored by Big Orbit Gallery, 19 IDEAS, and Griffis Studio that builds for Ashford Hollow in Springville. On Monday, August 24, Slow Roll Buffalo will begin and end with a part on Essex Street. Come cheer up sad robot and all the other garage door decorations that made up an art contest a few years ago. It’s a party!”