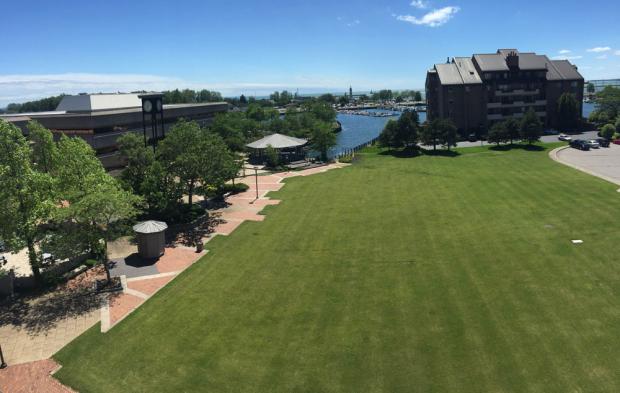 What started in July as a project of UB urban planning student Kevin Dagher, Waterfront Wednesdays has certainly become an event series responsible for bringing to light a more hidden portion of our beautiful Buffalo lakeshore: Waterfront Village Center. The space, having never been used before for community events, is nestled between two popular areas of Buffalo’s already booming waterfront in theErie Basin Marina and Canalside. Dagher feels this space is underutilized and is determined to use family-friendly, entertaining, engaging, and free events to make WVC more of a destination for the general public thus organizing the inaugural Waterfront Wednesday live music series.

Waterfront Wednesdays runs from 5 to 9 PM including live music, a large selection of food trucks that change weekly, and adult beverage options. Dagher’s goal is to make Waterfront Village Center more accessible to the public as it is a space that is hardly used by anyone but the immediate residents. This week, August 5th, features live performance by local act The Boys of Summer. The food trucks solidified for this tonight’s (August 5) event are (716) Food and Sport, House of Munch, R&R BBQ, Taffy’s Milkshake Truck and perhaps a couple more. By no means is there an admission cost and the parking is free! The address for the series is 28 Waterfront Circle right next to Templeton Landing being the Waterfront Village Office buildings.

I certainly tip my cap to the idea that Dagher has brought to fruition as he and I have had conversations about this in the past. With the first summer of events nearing an end, he has assured me that next summer’s programming will be build on what they’ve established this year into something a little bigger.

Dagher’s intention to create an event series in new and more secluded space that will continue to develop alongside the success of his series. Kevin’s goal, simply put, is to develop a relationship between WVC and the community. He’d to to keep the public engaged by providing events as his plans for future development are rolled out which inevitably will make the Waterfront Village a more vibrant and engaging aspect of our waterfront. “We have a really nice venue, really dirrerent than anything else in the area. It’s fun and safe with a family-friendly atmosphere. I encourage you to come check it out.” All are welcome to attend in the weeks to come (the series wraps up on August 19th). Next week, Tom Sartori will take the stage to wrap up the first year of Waterfront Wednesdays.