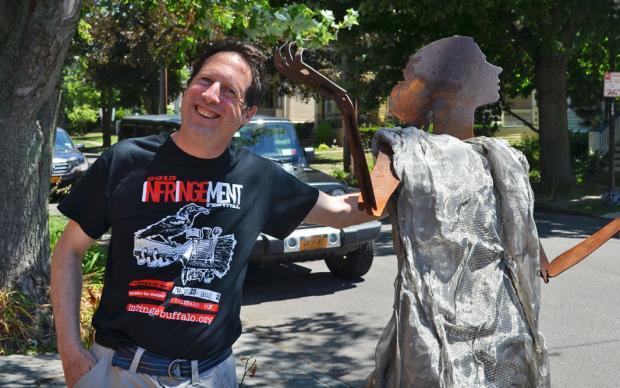 It only took attending one Infringement Festival for Bill Smythe to fall in love.

“I checked it out one year and had an absolute blast—from there I was hooked,” he said over a coffee break during this year’s festivities.

“I decided pretty quickly that I needed to find out how to get involved with these people. I ended up becoming the Venue Coordinator for Buffalo’s Infringement Festival, which is now in its eleventh year. Basically, I go out and solicit venues to see if they’d like to be a part of it… from there, it’s a lot of back and forth with the schedulers looking at availability and plugging performances into specific places, since the venues usually let us know what sort of programming they’re interested in having.”

Needless to say, it’s a hectic summer season for Smythe, who lives right in the heart of town with his wife, Lisa Cruz. He moved to Buffalo from New Jersey 20 years ago for a job with New York’s Department of Environmental Conservation, a position he still holds and enjoys.

Juggling full time work while coordinating the festival is a major part of the challenge, however, and Smythe said this year—his fourth as Venue Coordinator—”the encroaching real world” created more obstacles for organizers than ever before. Pointing out that the goal is to get some semblance of a finalized schedule out to the venues in early July, he describes the process as, “…the personification of Hofstadter’s Law,” meaning that things rarely happen on schedule.

And even without outside obstacles, planning Infringement Festival in Buffalo is no small feat. With a total budget of maybe five or six grand to produce some 800 shows and a volunteer team of between 10 and 15 people, it’s a downright demanding project and a bona fide labor of love. That everything moves forward each year without too many hiccups is nothing short of miraculous.

“I love that we make it happen pretty much out of thin air,” Smythe said. “They have these festivals in other places, but Buffalo’s is by far the largest. It’s the perfect combination of a vibrant art scene coupled with the cheap rent that makes it work so well here… unlike NYC, for example, where a venue’s rent is $20,000 and every penny counts.”

Infringement Festival, as we’ve come to know it, began in Montreal as a sort of protest to the increasingly corporate nature of the St-Ambroise Montreal Fringe Festival. By the early aughties, the St-Ambroise  festival had become a patented concept, fraught with registration fees and sponsorships that presented philosophical conflicts with the subversive tone that fueled the festival’s beginnings.

Experimental theater artist, activist, and arts commentator Donovan King founded Infringement as a means of refocusing Fringe Festival’s lost mission—to reclaim its vision of “cultural resistance” to mainstream ideals—thus permanently doing away with fees and sponsors. No city need pay any money to use the Infringement name and no jury will ever be elected to curate the programming.

“Really, all you need to start an Infringement Festival is the manpower and the will to do it,” Smythe said. “You go out and you make it happen.”

Having established himself as a dependable and devoted volunteer, this year Smythe was handed the additional responsibility of dealing with the acquisition of permits from the City of Buffalo.

“We’re starting to do even more outdoor events and the City has suddenly noticed we exist,” he explained with humor. “Since I already work for the State, I know what to expect. For me, it’s not as big of a deal as it sounds. But once again, timing is the biggest issue. We got our permitting requests filed right on the deadline, and you have to budget extra time for the paperwork to mine its way through the system. Everything is a process.”

Curiously, the festival ends up doing its own process of elimination, but it’s not based on credentials, popularity, or anyone else’s arbitrary definition of art. Smythe says that between the sign-up in February and the actual festival in July, 20 to 30 percent of participants drop out due to issues of feasibility. It’s something that festival planners have come to expect, and it ends up making for a more manageable schedule in the end, closer to deadlines when the extra space matters the most.

Still, as the local arts community grows and becomes more diversified, Infringement Festival is also bound to expand. In recent years, its already begun spreading out logistically, something Smythe understands is part and parcel to positive progress. At the same time, he misses the concentrated feel of his first Infringement Festival—a result of having performances booked mainly into just Allentown venues.

“The whole street was buzzing,” he said. “I’d like to see some of that feeling of concentration return. But I also think we need to work on awareness… it’s weird, but Infringement is the biggest thing that nobody seems to know about. We found a new organizer to help us with PR and I hope that’s going to make a difference next year, since people really need to know: hands down, it’s the best 11 days in Buffalo. We have a large community of participants, but there are so many more folks out there that would be blown away by this awesome, manic arts experience.”