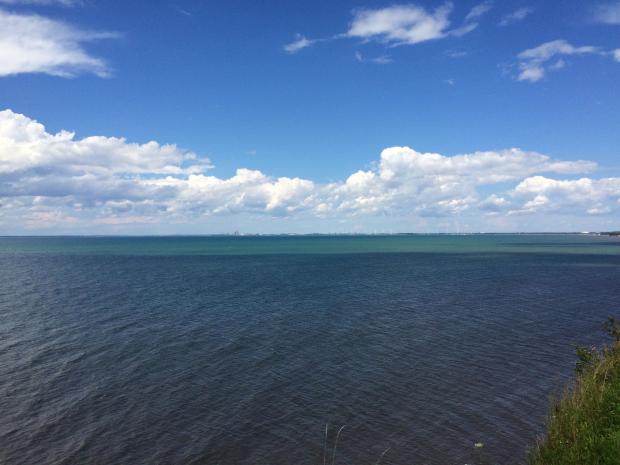 Physicist Tom Murphy recently concluded that mankind may not be able to avoid avoidable climate crisis because too many of us are “programmed to ignore,” and thus there may not be enough people around whose personality traits will allow them to both admit there’s a problem and then take rational steps to solve it.

Thankfully, recent polling suggests that Murphy is wrong. A July Yale-Gallup-Clearvision survey found that even though only half of Americans feel that climate change is a threat, fully 69 percent of us believe that it’s caused by human activities.

Thus when the president of the United States decides to personally announce an aggressive new power-plant emissions regulation plan, there are at least 100 million potential voters who are ready to agree with him that the phenomenon—whether us non-scientists call it “climate change,” or “climate disruption,” or “avoidable megadeath if we change, unavoidable if we don’t”—is for real.

Around where we live, the peculiar ways that our disrupted climate is changing could be a much larger force shaping the region’s future than anything we are planfully working on. Larger than the presence of Shark Girl or of Elon Musk.

Buffalo asset #1: more rainfall
Ask any rower, researcher, weather-watcher or Army Corps of Engineers official: Lake Erie water levels are up from two years ago. Water levels in the rest of the Great Lakes are, too: Our smooth and suave friend Mayor Rahm Emmanuel of Chicago no longer has to worry about the the raw sewage Chi-town flushes into the Chicago “river” backing up into his drinking-water intakes out in Lake Michigan, because Lake Michigan is high again, high enough to keep the best of the Magnificent Mile flowing south. Had the rains not returned, the long-term pre-2013 pattern of lake-level shrinkage might have cost Chicago billions, or just shut the place down.

Buffalo benefits from more precipitation because other places can’t. Yes, more rain events do indeed result in more overflows into our combined sanitary-stormwater system, but there’s a 15-year project underway to keep those flows separate, and thus improve water quality. The adjustment the Environmental Protection Agency forced the Buffalo Sewer Authority to consent to is achievable and underway. We are not Florida, which cannot achieve an end to its flooding crises that today afflict both Miami and now Tampa, because we are 500 feet above sea level, and they are less than five feet above sea level. If Lake Erie rises 5 feet, we lose part of the beach in Blasdell. If the ocean rises five feet, Florida loses everything below the top turret at the Cinderella Palace at Disney World.

Buffalo Asset #2: Nearby Agriculture
With guidance from Dr. Stephen Vermette, Buffalo State College student Michael Borrelli recently produced a poster of his research on how apple-growers in Niagara County are coping with extreme weather events, the spread of warm-weather pests, and an increase in frost-free days. The project included data from the Great Lakes Integrated Sciences & Assessments program in Michigan, which in 2014 produced maps that show how Ontario and Upstate New York fare better than most of the rest of the Great Lakes basin.

The gist: Growing seasons will be longer, but warm-weather pests will be more of a problem. More rainfall will help, but weird weather and storms may occasionally wreak havoc. It won’t be much warmer east and north of Lake Erie, but the central and western Great Lakes will be much warmer and stormier.

In other words, the hinterlands of Buffalo and Rochester will be seeing more precipitation and less heat-related stress than other northern regions, even as the huge apple-growing regions of the Pacific Northwest are currently on fire or soon to be—because the drought that is destroying California agriculture is now wreaking havoc with farms, orchards, forests, and rivers in once reliably-wet Washington and Oregon.

So despite patterns of sprawl that have interrupted or flat-out destroyed hundreds of square miles of farmland, the potential for Western and Central New York’s lake plains to re-emerge as major regions of agricultural production is very real. Agriculture currently constitutes less than one percent of the GDP of the Buffalo and Rochester metros. There is certainly room for growth—if farmland isn’t squandered by our developer class.

Buffalo Asset #3: Overbuilt Infrastructure
Rochester and Syracuse are arguably better-situated than Buffalo to absorb climate-driven migration from flooded coastal NewYork City or remigration from drowned Florida—not only because Rochester and Syracuse are spatially more compact, with their core institutions tightly clustered quite close to their central business districts—but also because those towns are less corrupt, have better universities, more diverse business leadership, and better-educated workforces than banker- and developer-dominated Buffalo.

Could climate change refugees become a major presence here rather than farther downstate? Perhaps—mainly because we have room in our downtown, space immediately east and southeast of downtown, most of the bones of a bigger city, plus one asset the other Upstate towns do not have: a renaissance branding that has not yet been tarnished by inconvenient facts. Were that branding to be further burnished by appeal to Buffalo’s century-old connection to green, clean hydropower, and to Elon Musk’s solar-panel plant, and to the Laird Robertson windfarm (recently discovered by the New York Times though in operation since 2006).

Building a light-rail spur out Genesee Street to our airport, and solving the NFTA crisis by repopulating the radically depopulated urban core of Buffalo, would be sensible transportation solutions that could at long last address the problem created by 60 years of sprawl: the spatial mismatch between people needing work and the places that might actually employ them.

But of course, climate disruption will be disruptive in ways that Tom Murphy and other rational, mathematically minded folks calmly regard as manageable—but that non-scientists have a hard time staying calm about.

Climate Politics Big and Small
There was a disconcerting edge to President Barack “No Drama” Obama’s statement on the urgency of reducing power-plant carbon emissions this week—as if the president of the United States knows something the rest of us aren’t yet privy to.

Nevertheless, it’s evidently no longer a political risk for candidates for federal office to address climate change directly, forcefully, even emotionally, as Obama did. The generational split in the audience for climate-change messaging worked to change-deniers’ (i.e., Republican) advantage in the 2014 midterm elections because old white people who watch Fox News turned out to vote in larger numbers than younger people. Those younger voters will come out in 2016. Every political analyst who knows how to count knows that if 69 percent of eligible voters agree with Barack Obama that climate change (disruption, whatever) is real, then the views of the core Fox News demographic will lose. Hillary Clinton has endorsed Obama’s plan to regulate emissions from power plants; no Republican candidate has done so.

But what about local candidates?

The median household income in the 27th Congressional District, now represented by Christopher Collins, is the highest in the region. So is the portion of the district’s workforce that is in executive, managerial, professional, and other positions requiring higher education. It would seem sensible for any challenger to a Republican climate-change denialist like Collins to see if any of those highly educated, better-off voters could be persuaded to join the 50 percent of Americans who poll favorably on taking actual governmental action to prevent avoidable catastrophe.

The City of Chicago, under effervescent Mayor Emmanuel, has had a climate-change response plan in place for four years. Though one searches in vain for an official Buffalo or an official Erie County plan, the non-existence of a comprehensive planning document may indicate only that our developer-driven discourse of tomorrow’s Buffalo just hasn’t been challenged. Our political class, in other words, doesn’t know that it doesn’t know.

But just as the international oil glut, and the trend toward low-wage work, and the failure of the Michael Porter analysis, and demographics all shape our regional future, so, too, will the climate—here and elsewhere, especially in those elsewheres that may become unliveable.

Upstate New York was cleared of its oak forests and became, 150 years ago, a breadbasket. Great Lakes shipping once shaped the economy. The American city that was the first to electrify did so with renewable energy. These phenomena may occur again. If so, Buffalo may win.