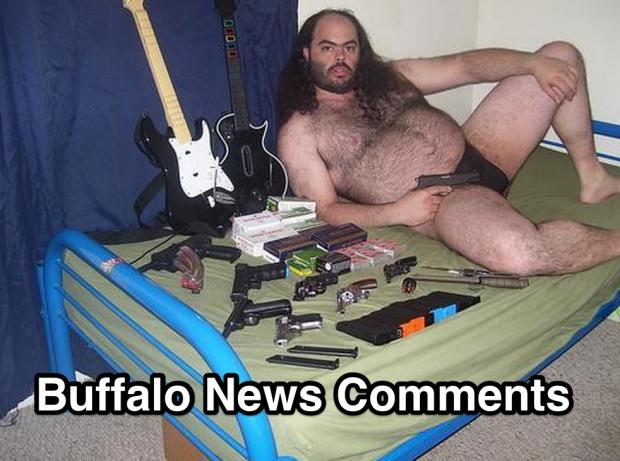 The contemporary axiom is “don’t read the comments”. In the Buffalo News’ case, it should be amended to, “don’t allow the comments”.

Blogs have comment sections. A decade ago, I’d write a blog post, people would comment, and I might occasionally respond. Sometimes, a dialogue could be had as these commenters developed their own personalities and points of view. Although things could get heated, if the original author of the post being commented-on was involved, there was a chance for something more than just trolling and sniping.

But the Buffalo News isn’t a blog, and its authors don’t participiate the comments sections, ever. The experiment whereby news media solicit comments from viewers or readers on straight news stories has got to end.

Not the story comments to Facebook — whatever, that’s different. I’m talking about comments that appear directly under the online publication of a news story — whether it’s WGRZ, WIVB, or the Buffalo News, and whether it’s Facebook or Disqus or something else. There, comments offer no value and are little more than petri dishes that help to grow and disseminate some of the most vile and disgusting behavior from people hiding behind a cloak of undeserved anonymity.

Here at the Public, I write (so far) exclusively for the online audience. We use Facebook comments, which is different because, for the most part, Facebook demands that users sign up using their real names. But comments and debate or discussion don’t happen, because the shield of anonymity is essentially gone. Anonymity had its downsides, sure, but the upside was that insiders felt safe bringing up things that they could never do on the record. I miss that, to a point.

But what specifically prompts me to write this piece has to do with an article that the Buffalo News published about a laudable new paper. “Karibu” will publish in English, Karen, and Arabic to cater to new immigrants in Buffalo. Refugees. Legal residents. Immigrants help to form the backbone of this country. They come to this country full of hope and promise for a better future for them and their kids; to leave oppression or poverty and work hard to improve their lot. They start businesses. They pay taxes. They participate in commerce. They become Americans.

Because their path here was not easy, they are not, contrary to popular opinion, more prone to commit crime or otherwise squander their opportunity.

The mentality in Buffalo and western New York when it comes to race and immigration is too often not an enlightened one; we see it in the news with Joe Mascia and Carl Paladino. But the comments left at the Buffalo News’ website in response to the article about Karibu were as heartbreaking as they are hateful.

Here are some ugly examples, as they appeared mid-day on Wednesday: Notice how few of these people have the stones to put their real names behind these vile comments. Why? If they’re proud enough of their race-hate to type them out and click “publish”, why hide behind anonymity? These people are not a credit to the News, they are not a credit to Buffalo. Simply put — these people with this mentality are keeping us down far more than any immigrant.

At long last, Buffalo News. It’s time to turn comments off. They serve no one’s interests. They serve no legitimate purpose. It reflects poorly not only on the News, which still maintains them, as well as on the area at-large. There is no legitimate discussion happening there, and with no participation or reasonable moderation, they add no value.