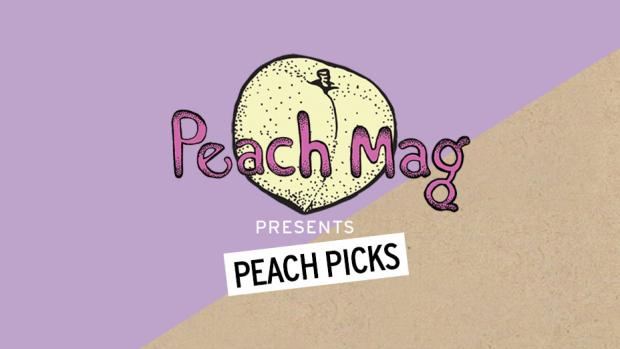 This week we celebrated the launch of Peach: Season 2 with a website makeover and the publication of “The Shelf Life of Cherries,” a poem by Carly Weiser, the resident Production Manager of Alleyway Theatre and Buffalo United Artists. “The Shelf Life of Cherries” is an inventive exploration of sensing pain from the corner of one’s eye and testing how long one can keep it there. The narrator of the poem scrolls through her Instagram feed, winks at her surroundings, and locks eye contact with whatever distraction that comes into the frame, all while seemingly putting her anxiety in the corner. “Take a break, roll around,” she writes, “think about liberty and justice for all and if you left any lights on in the theatre.” By the end of the poem, we gather a sense for what’s lurking beneath the surface, though Weiser only teases us; her narrator’s focus, like her sentences, are often cut in half, hinting at the half lives that pain and worry cause us to live. Weiser is consistently an interesting force within the Buffalo creative community. Known for finding innovative ways to bring together the theatre and writing scenes, she is responsible for collaborations such as Flip the Script, in which Weiser, alongside local poet and playwright Justin Karcher, calls on local actors and actresses to perform work by local poets. Another installment of Flip the Script is rumored for early Fall, the least of which reasons this reviewer is excited to follow Weiser more closely in the future.

I’m rereading Jacqueline Woodson’s slim, lyrical novel Another Brooklyn (2016), and I’m convinced that summer is the perfect time for it. The book has such a vivid sense of place that it’s absolutely transporting. Woodson slides around in time, exploring grief, girl friendship, and the way that, for a child, a neighborhood can feel like an entire world. Her rendering of 1970s America (the aftermath of Vietnam, white flight from cities, justice and the lack of it) seems true and real, partly because her narrator August is so focused on finding her place in that America. Woodson is a poet, too, and her language is radiant. This is a rare perfect book.

All the dogs at the farmers’ market on Bidwell, especially that enormous tawny mutt who looked like a cross between a dingo and a wolf. The obsessed toddler who wanted to pet every single one. Water infused with cucumber and mint, even though my kid called it “pickle water” and that wasn’t the aesthetic I was pursuing. The way the setting sun looked over the trees in the Delaware Park last Thursday, like a child’s drawing of a round gold sun in a bubblegum sky. Last, bunnies who hide in plain sight on front lawns, still as statues, hiding those blinding white tails in the clover. We see you, bunnies, but you keep being you.

“Peach Picks” is a column of literary news and recommendations written by the editors of Peach Mag, an online literary magazine based in Buffalo. For inquiries, contact the editors at peachmgzn@gmail.com.