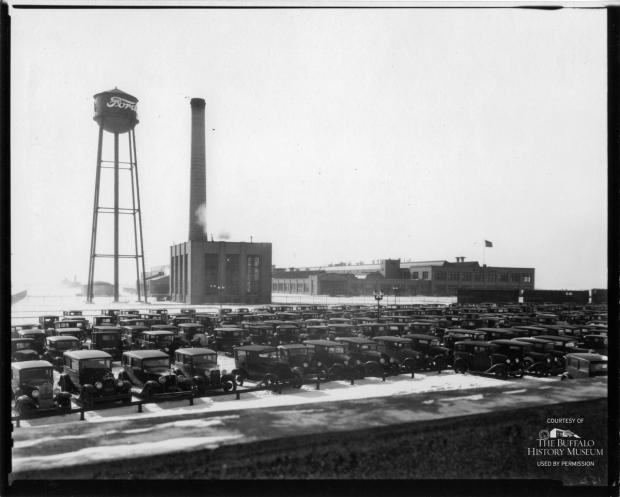 “Back in June 1930, 94 acres of land lying under water next to Fuhrmann Boulevard was purchased from the state and the Buffalo Creek Railroad. A year later, the swampland had been miraculously transformed into an important cog in operations of the gigantic Ford Motor Company.” —Buffalo Courier Express, August 26, 1951

The Ford Motor Co., Fuhrmann Assembly Plant, is one of Buffalo’s automobile manufacturing landmarks. The plant, built in 1930 and designed by Albert Kahn Associates, began churning out cars and trucks in 1931. The plant had several fits and starts, due to the Depression and labor disputes, and during the war was leased to DNX Engine Corporation for building diesel engines. Ford resumed operations in 1945, and by 1953 had about 1,250 employees making 50,000 cars and trucks annually. At peak production, a new vehicle left the assembly line every two and a half minutes.

In 1958, Ford permanently shuttered the Fuhrmann plant, transferring operations to a newer facility in Lorain, Ohio. At its closing, the Fuhrmann plant became the last place in Buffalo where finished automobiles were assembled. More than 1.2 million Ford cars and trucks were made there.

With the exception of the power house and 100-foot-tall water tower, the 559,000-square-foot Fuhrmann plant still stands. The Niagara Frontier Transportation Authority has owned the mostly vacant factory complex, better known as the Terminal A Building, since 1967. Its redevelopment future, if any, is not yet known.