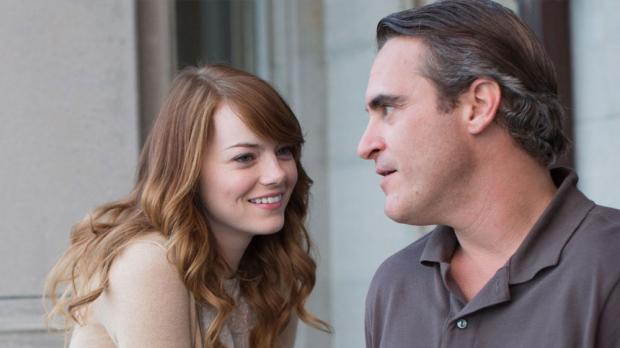 Well, he’s back; it was inevitable that he would be, even if it has been a long absence. I mean Woody Allen the serious thinker, the moral philosopher, and existential worrywart. You have to believe that it’s been difficult for the filmmaker to refrain from dramatizing his bleak observations about life and death. Back in the 1980s, the heyday of his cinematic ruminations about the human condition, Allen was virtually Hollywood’s go-to guy for deep thought. He turned out such Ingmar Bergman-influenced films as Another Woman and Interiors and the Chekhovian-flavored September, all earnest, largely humorless and doggedly derivative.

Irrational Man, his latest one, is nearest in tone to Crimes and Misdemeanors (1989), an examination of guilt and punishment, or its absence. In that one, a wealthy ophthalmologist (Martin Landau) murders his inconvenient and trouble-threatening mistress, and gets away with it. Allen was in his most flagrant “God’s gone away and we’re lost in the stars” mode in that one. He even pulls in an actual humanist scholar, Martin Bergmann, to play himself and tell us that it is we who give meaning to an uncaring universe, a lesson that Allen’s movie winds up undercutting. The movie’s second-hand, shopworn pieties impressed a lot of people who ought to have known better.

God hasn’t abandoned everyone in Irrational Man. He (she?) doesn’t even figure in what happens, and no one seems to miss him, especially not Abe Lucas (Joaquin Phoenix), a newly hired philosophy prof at a liberal arts college in Newport, Rhode Island. Abe comes equipped with a very bad case of world weariness, and a flask from which he slugs whiskey, privately and publicly, on campus and off. Given Abe’s drinking, his close-mouthed conversational style, and his distracted air, one might wonder how he got hired. Or for that matter, why an urban college campus doesn’t seem to have any black or Hispanic students or faculty. No matter, this is Allen Land, not America, a place that’s almost always white and privileged.

At an introductory cocktail party, he encounters Rita (Parker Posey), a chemistry instructor who tells him if he wants to know who’s doing whom on campus, he should just ask her.

Abe may seem to us to be a screwed-up, hyper-literate shlub, but to Rita he’s a refreshingly mordant alternative to her husband and the other college males. Soon enough, she begins a fling with him, despite his impotence and existential morbidity. Nor is she his only admirer. Jill (Emma Stone), one of Abe’s best students, also develops a yen for him which he ethically rejects, until he doesn’t. These women seem to find him an intriguing, poignantly romantic figure. The fact that it’s said that his wife ran away with his friend, and he lost another friend when he stepped on an IED in Iraq, apparently renders his troubled, alienated persona attractive. Even when at a student party he spins the chamber of a revolver with one bullet, points it at his head and pulls the trigger. He’s only demonstrating, he says, the need to act against the oppressive emptiness of daily life. Of course, Abe has already told Jill, and us, that his former political activism led nowhere except to disillusionment. Never mind.

But when he and Jill chance to overhear a conversation about a corrupt local public official who’s making the speaker’s life miserable, Abe is finally inspired to action, and the mere anticipation of it, gives his life meaning and relish. He’s liberated psychologically and physically (that is, lustfully).

Allen provides Abe with a few smatterings of philosophical catch phrases that may sound a little like phenomenological epigrams, but what the filmmaker has really staked all this on is an immature, quasi-Nietzschian pretent. Abe is returned to life by his plan to flout traditional morality and the law, in order, he says, to render justice where it’s being denied. But Allen’s convenient rationale doesn’t obscure the charge Abe is getting from his plan. It’s really about him, the man capable of rational thought and conduct above and beyond the conventions that bind others.

There’s a slight sense of detached irony in some of these talky proceedings, narrated by two characters (one of them dead!) But Allen abruptly retreats from his own apparent support of Abe’s justification, and we’re left with no wit, or purported wisdom. It’s as if Allen himself was too enervated, bored or blocked to make much of what he started.

Irrational Man never feels as if there’s much of anything at stake, because there isn’t.