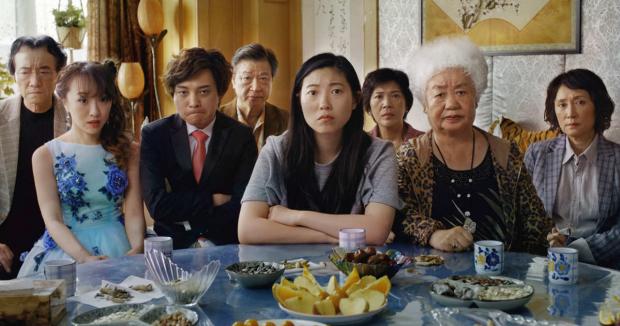 The Farewell stars the Chinese-American rapper Awkwafina as Billi, a young New Yorker who is devastated to learn that her beloved grandmother, whom she hasn’t seen since her parents left China when she was 6, is dying. Because the rest of the family also emigrated, all agree to return to China to visit Nai Nai (Mandarin for “grandmother”) in her last days. But because they don’t want Nai Nai to know she’s dying, they visit using the ruse of a hastily-arranged wedding for Billi’s young cousin. Billi objects to the lie but agrees to go along with it.

If this strikes you as an appealing premise for a comedy-drama about family and culture clash, the odds are you will enjoy it. Directed by Lulu Wang, who based it on an incident in her own family, The Farewell has a rating of 8.2 on imdb.com and 90% on MetaCritic. On Rotten Tomatoes, it scores 91% with audiences and a whopping 99% with critics.

That will presumably come down a smidge when this review is added.

Don’t get me wrong, I didn’t dislike The Farewell. I don’t even have much of anything bad to say about it, aside from Awkwafina’s terrible posture. But I do seem resistant to the charm that just about every other viewer seems to be responding to.

The Farewell began its dramatic journey as a piece on “This American Life” in which Lulu Wang described the experience of concealing news of her grandmother’s impending death from her. The fake wedding was invented for the movie, and serves to give a palatable structure to Wang’s musings on culture clash. But it also stokes comic anticipation that is not entirely satisfied. (Depicting weddings as the epitome of bad taste has been a staple in American comedies since at least Goodbye Columbus 50 years ago.)

The movie also challenges audience expectations with such a passive heroine. Billi debates the ethics of lying to a dying woman with other members of her family, but doesn’t challenge them, and the fiction never snowballs or culminates in a cathartic revelation as we expect it to.

Nevertheless, Wang does solid work in providing a range of characters to embody different aspects of the emigrant experience, and looks at the differences between those who left and those who stayed behind in unexpected ways. Her fictional family is just large enough to cover the territory needed, and most every member gets a few moments to shine. (I especially liked Tzi Ma and Diana Lin as Billi’s parents, the two most uncomfortably stuck between the old and new ways.)

In the end The Farewell has a fair amount to offer, even if what you get may not be what you came for.