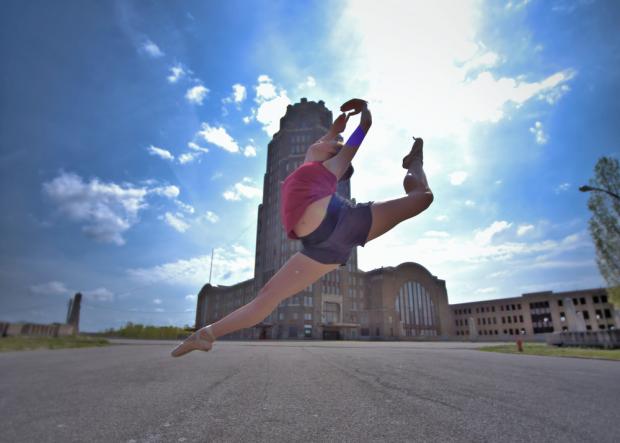 Let’s be honest, dance isn’t the art form pushed to the forefront of most people’s radars and agendas. When it comes to the arts, when budget cuts are made, dance is usually the first to get downsized. Then there’s the argument dancers—who are considered artists of movement—aren’t always given the credit they deserve for all the countless hours they sacrifice to choreograph, rehearse, sweat, and endure wear and tear on their entire bodies, all for the sake of their art. While the dance world seems to be overlooked in general, there are people working to expose the immense talent we have right here in the city of Buffalo.

“We all know that arts programming is important in any community, especially in regards to economic development,” Jess Moore, the director of Dance Days of Buffalo, said. “I think dance tends to be an underserved part of the arts as a whole.”

Moore, who grew up dancing in Buffalo, came up with the idea to start a three-day dance festival last spring. She not only wanted to do this for the dance community, but for all Western New York residents and those in the surrounding areas, so people from all walks of life could come enjoy and be exposed to the art form of dance.

“Buffalo in particular has the dance community that’s on the rise,” Moore said. “We don’t have a ton of opportunities in Buffalo that are specific to dance as far as master classes and presenting opportunities, so I think by giving those opportunities to dancers here it creates an awareness of each other and then also there’s so many people coming from out of town, it creates a broader awareness of integrating our community with the larger dance community across the state and across the country. Right now no one knows Buffalo has awesome dance and now they will.”

After having meetings with several colleagues, dancers, friends and others she knew could provide insight, she began planning for this time consuming endeavor last summer.

“Jess really is the perfect person to organize an event like this, which is really the first of its kind in Western New York,” Mackenzie Lynch, a bellydance instructor at Oasis Dance Center, said. “You really can’t take on creating something this large without being intelligent, savvy and most of all, incredibly passionate about dance and community outreach.”

When it came to the planning stage, Moore convened with fellow dancers Cortney Costanzo, Mackenzie Lynch, Lauren Ventura and Ellen Shadle to discuss the format of the festival. After months of lengthy discussions, the core group decided they would send out a call for teachers, local or from out of town, to see who would be willing to teach during the event. They had an overwhelming response of 70 teachers and 120 dance class ideas.

The group arranged for a selection committee, consisting of Lynch, Alicia Blasi, Angela Lopez and the student dance organizations of Buffalo State College and Fredonia University, to narrow down the amount and in the end they accepted 43 teachers.

“I would say it’s pretty well split,” Moore said. “A lot of the local teachers we do have are not the usual suspects. There are a lot of local teachers I don’t think a lot of people are familiar with. I would say about 30 to 40 percent of the teachers are from out of town, as close as Rochester, but as far as New York City.”

The wide variety of classes being offered at Dance Days of Buffalo, which will be held each day of the festival for students 16 and up, include world dance forms, such as tribal style dance, Turkish bellydance, African, traditional Jamaican folk forms, dancehall, Bollywood classical dance and Hispanic folkloric dance. There are also the dance class staples of jazz, ballet, tap, contemporary and then also some classes you don’t see every day, like burlesque, musical theater. On the hip-hop dance front, which are always popular classes, hip-hop choreography, top rocking and B-boying will be just a few of the many classes taught. Each day will also start off with either Pilates or yoga.

“I think there’s a little bit of everything, but as you know there’s like dance genres I’ve probably never heard of yet,” Moore said. “There’s really a lot going on.”

One of the special offerings will be a ballet repertoire class where students will get the chance to learn an actual segment from a real ballet. Dancers will also have the opportunity to get 15 minute massages from The Body Essential Holistic Wellness Center for $15. Other vendors participating include Young Living Essential Oils, Total Life Changes, Bailey Slipper Shop, Indie Twenty Jewelry, Serenitea and LulaRoe. Breakfast by You Crack me Up food truck or Daniela’s Catering will be available for purchase each day, and lunches by Ashker’s will be provided to those who purchase three-day or single day tickets.

As far as non-dance classes go, there will be a few presentations for dance educators on the subjects like inclusion in the classroom and injury prevention. There will also be a roundtable-style class and a presentation from Moving Miracles, a non-profit organization that offers dance classes and performing opportunities to students with special needs.

Each night of the festival there will be a dance performance for everyone in the community to come enjoy.

“I wanted to give something open to the public or non-dancers to just come and experience dance,” Moore said. “I also wanted to give people here the chance to present work if they want to.”

The first night of the festival, on Friday, August 5 at 8 p.m., will be the Contemporary Choreographers Showcase, which was a curated by Moore. Out of the 24 works submitted, thirteen works were chosen. Choreographers presenting their pieces at the showcase include Elise Cruce & Laura Pietak, Hannah Seidel, Rachel Keane, Nakita Moné, Allison Bohman, Kara Mann, Phil Wackerfuss, Ashley Payne, Laura Chubineh, Zachary Frazee, Ashley Vita Verde & Aaron Water, and Holly Simme.

For the second night of the festival, on Saturday, August 6 at 8 p.m., there will be a world dance showcase titled “Dance Around the World,” which was organized by Lynch, who has studied Egyptian bellydance since her pre-teen years and has a keen interest in furthering quality representations of world dance forms in the Buffalo area. Dance groups involved in this show include Baila Salsa, Clann Na Cara, African American Cultural Center’s Dance & Drum Performance Company, Oasis Binat, Ballroom Revolution, Relativity BellyDance, Sinuous Tribal Fusion Belly Dance, Amor & Heritage Traditional Dance Co., SiSi Nana Dance Ensemble and Devi Bollywood Dance.

“That will be a really fun one,” Moore said of “Dance Around the World” show. “We have Irish, African, all different forms of bellydance, traditional Burmese dance and more.”

Last but not least, the third night of the festival, on Sunday, August 7 at 8 p.m., Verve Dance Studio will take over the stage to present their show, “Inside Hip Hop.” The Differential Flava Crew featuring Bboy Depree, Bboy Nashtronaut, Bgirl Resolve, Brooklynn Jay, T.E.I.N. and Centric will be presenting a showcase of all the different styles of hip-hop. They will also educate the crowd on the history and background of the various elements of hip-hop as well, which will all conclude in a performance.

Ellen Shadle, a former dance company owner in New York City, heard about Moore’s vision to launch a dance festival in Buffalo and immediately reached out to help her. Mostly she assisted Moore with the festival’s budgetary structure, connecting her to Fractured Atlas, an arts service organization that offers fiscal sponsorship to its members. She also gave her some input on the choreographic submissions for the showcases, but otherwise she maintains that Moore did the brunt of the work, which would normally take a “whole team of people.”

“There is much warranted attention and celebration to Buffalo’s economic resurgence and that resurgence should also include attention and energy put towards Buffalo’s cultural health,” Shadle said. “Buffalo has enjoyed a reliably robust presence of professional and reputable theater, music, and visual art for the public to engage in.  Quite simply, without a viable presence of professional dance, Buffalo’s cultural ecosystem is not quite complete.  The arts’ role in a community is not only recreational, but also civic. Dance Days is an expression and celebration of how significant the visibility of dance in Buffalo is.”

Classes run from 8:15am to 6pm each day.
Performances start at 8pm each night. Kids 12 and under are free.