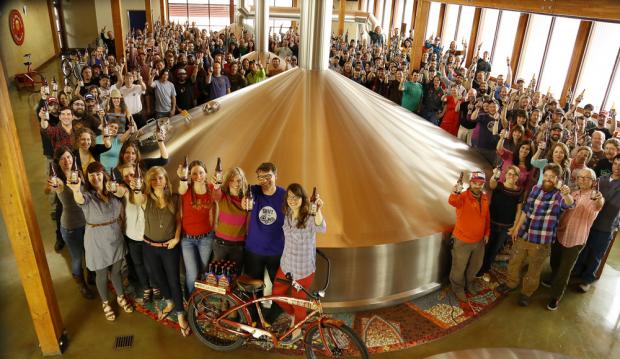 As Buffalo grows in its influence on the national craft beer scene, expanding the list of breweries that distribute in the area is an important watermark. Recently, New Belgium, one of the nation’s pioneering craft brewers, entered the Western New York Market, in a big way. Conceived in 1988, the Fort Collins, Colorado, employee-owned brewery has become one of the industry’s most influential, working diligently with both American craft breweries and international brewmasters to bring beer drinkers unique and interesting beers. Occasionally these offerings are inspired by current trends, but generally it is New Belgium’s innovative takes on traditional brewing styles that they are best known for.

New Belgium’s expansion into Western New York is meaningful. With an exponential rise in craft beer consumption (as well as in craft beer production) over the last five years, bigger, more established breweries are beginning to take notice of the Queen City. The region has several award-winning breweries that it calls its own, and that has a lot to do with breweries taking notice. As New Belgium’s Kyle Cox says, “From the perspective of a beer enthusiast and Western New Yorker, it’s been amazing watching the rise of craft beer in the area recently. In the past several years we’ve seen so many people starting breweries and hop farms, having fun in bars and festivals, and finding unique ways to celebrate our heritage. Beer is more than just a beverage, it’s really a big part of American culture.”
Though New Belgium has not been in Buffalo long, they have given plenty to craft beer lovers. Their flagship beer, Fat Tire, is available in most grocers in cans, bottles, six-packs, and four packs. Also available are Ranger, an IPA; Rampant, a double IPA; and Citradelic, New Belgium’s tangerine IPA.

Along with these selections, the brewery has issued a special 12-pack with a little help from their friends. Fat Tire and Friends has New Belgium traveling to five breweries across the US and brewing a batch of their famous copper ale, each with a special twist provided by the host brewery.

Recently, some local beer lovers sat down at Pizza Plant’s Transit Road location to sample some of New Belgium’s offerings, with a focus on the Fat Tire and Friends collaborations.

To begin, those sampling tasted the one that started it all for New Belgium, Fat Tire. The group agreed that the beer was sweet, with a malty nose and a similar palate, with sugar and cereal malts standing out.

Next to be served was New Belgium’s collaboration with Avery. Fat Wild Ale is a funky, bready version of the original recipe. It had a fruity body with Brett funk and toasty, caramel malt finish.

The third selection was Allagash’s Belgian take on Fat Tire. Fat Funk had a kick of Brett C and more horse-blanket than its predecessors. One of the tasters commented that Fat Funk was a sweeter version of the popular Orval beer.

Our final selection from Fat Tire and Friends was Firestone Walker’s Fat Hoppy Ale. It was a good, old-school IPA with a little bit of a pilsener finish. Nothing flashy, just a good beer.

Also available for tasting was New Belgium’s summer slammer, Heavy Watermelon. The beer was different than other watermelon beers on the market in that it had more of the rind flavor than the fruit of the watermelon. The group decided it was better than the average beer of similar structure.

As the tasting came to a close, the group got to try a few selections from New Belgium’s Lips of Faith series. These are a nod to traditional Belgian brewing recipes, with some using sugars from uncommon ingredients such as carrots to feed the yeast in the fermentation process. These were certainly the most interesting selections of the night, and seemed to be enjoyed by everyone at the two tables.

It has been a long time coming for New Belgium’s distribution to reach Western New York, and the innovative brewers in the Buffalo area can be proud that it is their hard work that made the region desirable. Cox says there is a lot more to look forward to from New Belgium. “We’re bringing out a Flowering Citrus Ale that is a collab with De Koninck, and we’re going to have Le Terroir, which is our dry-hopped sour, coming in September. Our brewers and cellar folks are running the largest and one of the oldest sour barrel aging programs in the country, and I revel in nerding out about the history and chemistry of these beers. We’ve got Buffalo’s own Dave Glor [former Flying Bison brewer] working with the pilot brewery on styles and ingredients of the future.”

With so many great things happening in Buffalo’s brewing industry, and fantastic beers like those New Belgium has brought to the area, there has never been a better time to be a beer lover in Buffalo.  A toast to the Queen City, its brewers, and its appreciation for great beer.