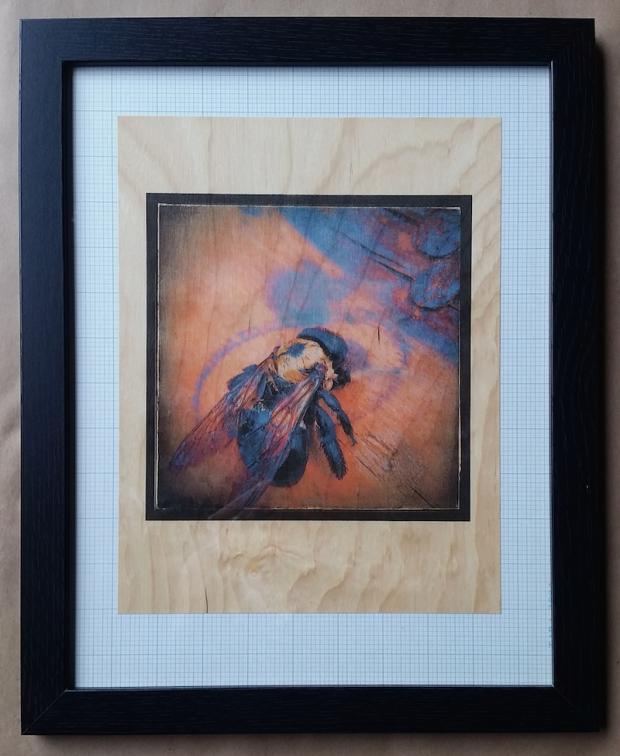 Among the more beautiful artworks in the current WNYBAC Members’ Show is photographer bobCollignon’s print on kozo paper—a fibrous semi-transparent tissue of Japanese manufacture—of a dying dragonfly—dying as indicated in the work title but also it seems the slightly askew posture at rest of the subject insect—on kozo paper, on a further semi-transparent graph paper grid—reminiscent of a door or window screen—echoing the exquisite still further semi-transparency of the wing architecture and delicate needle bodily form of the dragonfly. Levels and varieties of semi-transparency underscoring the seasonal transience elegiac deep subject matter of the piece.

The dragonfly work is in black and white. A mate piece by the same artist depicts a carpenter bee—again maybe dead or dying—in somber colors and with particular focus on the gothic cathedral stained glass windows character of the wing structure. Lacy patterns of iridescent glassine islands surrounded by opaque support strips.

Among other notable works, Tim Pauszak’s large-format—about four feet by five feet—woodcut depicting an old fat-wheel bicycle apparently retrieved from Lake Erie, inasmuch as thoroughly encrusted with invasive species zebra mussels, and supporting other familiar lake haul items such as an old toilet seat, tangles of old fishing line, a hypodermic needle, and draped over one of the remaining intact spokes, another invasive once memorably identified by Dale Anderson as to genus and species as “Lake Erie Whitefish.”

Donna Stepien’s piece is about cultural propaganda at the most basic level, i.e., food. It’s an odds and ends book of a few hundred or thousand of the zillion recipes the artist’s mother, an immigrant from Eastern Europe, tore or cut or hand-copied over the years from American newspapers and magazines and the like. New dishes to make for the family, but subtly also, new products to buy, in accord with the new American way of doing things. Bisquick, Crisco, Jello, processed foods, prepared or half-prepared. Variously denatured. How to become American.

Rich Kegler’s letterpress print I Saw the Figure 5 in Pantone 874 is an homage piece to Charles Demuth’s painting I Saw the Figure 5 in Gold, an homage piece to William Carlos Williams’s poem The Great Figure, which is about seeing the number 5 on a fire truck speeding through a city on a rainy night, with “gong clangs / siren howls / and wheels rumbling.” Pantone 874 is a commercial gold-tone printing ink. At the bottom of the Demuth painting are the neatly lettered initials “CD” and “WCW.” At the bottom of the Kegler work, in similar format, three sets of initials, “CD,” “WCW,” and “RK.”

Ella Marie Elm has an art book with photos, watercolors, and some poems with occasional recourse to Hawaiian language terms gleaned in the course of the several years she lived on Oahu. Orientation terms mostly. Basic Hawaiian directionals. “Mauka,” meaning “toward mountains, land.” “Makai,” meaning “toward ocean.”

Frank Singleton has a typewriter art piece with reference to cubism—and possibly also Henry James—called Portrait of a Lady. Mark Lavatelli has a jazzy abstraction encaustic monotype collage, called Hoopla. John Ozimek a handsome large-format work featuring linocuts of three Swimmers in Hoyt Lake, Delaware Park: Heliozoan, Turtle, Rotifer. The heliozoan and rotifer are microscopic animalcules, helpfully enlarged in the piece to turtle size. And Simon Bond another three-linocuts work featuring two head and shoulders silhoutte portraits and one splayed black bird. Possibly road kill, but fresh road kill. Nicole Cooke a letterpress poster with quotation from Charles Bukowski summing up his poetic philosophy in a nutshell: “We are here to drink beer, laugh at the odds, and live our lives so well that death will tremble to take us.”

Even some free takeaway art. Joshua Mangis’s coin-like gold-painted ceramic tokens with (obverse) impression images of the “push down and turn” verbal instruction often seen on medicine bottle caps, and (reverse) graphic image alternative similar instruction. Take one, he says, “as a keepsake, as a symbol of healing, as a transitional object, as evidence that self-care requires time and effort, as a reminder of your immense intrinsic value.”

Much more. The Members’ Show runs through August 18.