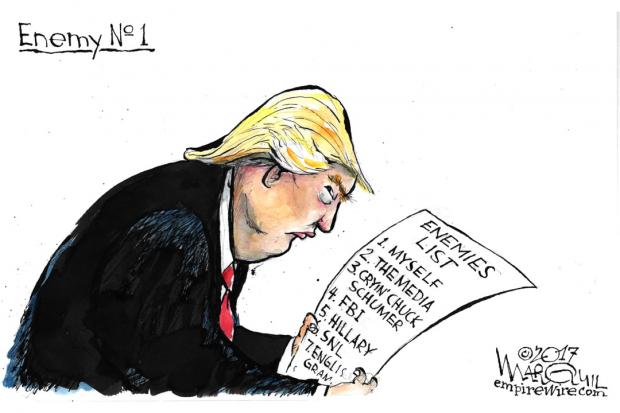 There are several very good reasons people are leaking all over the Trump administration. The most important is, he has given people of principle and responsibility no other choice.

In “How Bureaucracy Will Stop Trump” (The Public, Feb. 1, 2017), I suggested that many workers in the vast government bureaucracy would attempt to interfere with some of Donald Trump’s attempts to dismantle the US government as we know it by engaging in a “slow-buck”: Orders would come down from the White House, people would say, “Yes, boss,” but, time and again, nothing would actually happen. Pieces would get moved around, but things simply would not move forward. No one would actually say, “No, we won’t do that; it’s ill-informed and stupid.” That gets you fired. How can you get fired when you’ve obviously been busy night and day?

I also noted that government bureaucracies are populated largely by men and women who really care about the work they do and the responsibilities they have. There may be cynics in the West Wing, but you won’t find many in the EPA or in the FBI.

Leaking is as important a response to bad governance as slow-bucking.

Donald Trump obsesses about reporters and government investigators getting information he would prefer remain secret. He talks about them as if they were all one kind of thing: leakers. Like most things Trump gets excited about, the reality is more complex than that.

The word “leak” generally means unwanted output from what is supposed to be a sealed gaseous or liquid system. A “faucet leak” results in a drip-drip-drip sound; a “pipeline leak” puts toxic fluid into the water table; a basement “gas leak” results in a noxious odor and perhaps an exploded house. A leaky penis indicates a faulty urethral sphincter or gonorrhea. And extensive leaks from a political office suggest an office in which the center does not hold.

Not infrequently, government officials leak on themselves: A politician calls a reporter to provide a “heads-up” on something that hasn’t been announced yet. Reporters get calls from people who know they are interested in an issue and just want to do them a favor by providing a bit more lead time than the other guys will have. Sometimes an official wants a reaction to something that could still be stopped or changed. Sometimes an official hopes to put a slant on an upcoming story. Are the behaviors I just described leaks, tips, or manipulations?

What about when, at a party or football game, someone in government mentions to a reporter that a study about, say, toxic emissions by a major industry in town, had been started, then, abruptly, had been canceled. Nothing illegal about that conversation, but after it, the reporter knows something important he or she might not otherwise ever have known. Leak or tip?

“Leakers” generally want their identity kept secret. A “whistleblower” is often someone who says, “And you can tell them where you got the information.” Daniel Ellsberg never said to the New York Times, “Don’t say where you got the Pentagon Papers.”

People leak for many reasons, but one of the prime reasons for the West Wing leaks is Donald Trump’s almost total avoidance of press conferences in which questions and follow-up questions can be asked. Donald Trump dassn’t encounter any responsible, competent interviewers and he dassn’t do the kind of press conference US presidents have been doing for decades. How can he respond to questions, when he is constantly contradicting himself and when he knows almost nothing about anything? How can he handle questions calling him on his incessant lies? With very few exceptions, the only reporters he actually engages are reporters guaranteed to toss only slow-balls.

(I got that word—dassn’t—from one of my Pennsylvania aunts when I was a kid. She’d say, “He dassn’t do that.” Dictionaries say, implausibly, that the word is a contraction of “dare not.” It must have some other, forgotten root. You hear it, and you immediately know what it means. My aunt sometimes said “dare not.” Dassn’t was, for her, a far stronger way of saying it, almost like saying “really dare not,” without the need for the adverb. Trump warrants the dassn’t.)

He tweeted on June 11, “I believe the James Comey leaks will be far more prevalent than anyone ever thought possible. Totally illegal? Very ‘cowardly!’” It is a typical Trump tweet. The part approaching a sentence doesn’t make syntactical or any other kind of sense: What can the word “prevalent” possibly mean in that sentence? His two accusations hide within punctuation marks: The question mark after “Totally illegal?” says, “I’m not sayin’, but…” and the quotation marks bracketing “Very ‘cowardly!’” suggest he’s only quoting something he heard. As in his unscripted speech, his nouns lack specificity, and his modifiers are either empty superlatives or waffling qualifiers.

Trump tweets about his frustrations and his self-pity; he attacks people; he proposes preposterous plans; he praises himself; he lies. And, again and again, he tweets about West Wing leaks.

The kind of leaks Donald Trump obsesses about have to do with things done and said in connection with his campaign and his presidency. Most could only come from people with privileged access to his conversations and his actions. They are delivered to agencies that question both. (On February 16, Paul Begala wrote on the CNN website, “Donald Trump whining about leaks is like Jack the Ripper complaining about paper cuts. He is President in large part due to leaks.”)

The Donald Trump, Jr. emails with a British entertainment publicist about the attempt to get dirt on Hillary Clinton from Russian agents came out because “a former Trump-campaign official” gave the emails to New Yorker reporter Ryan Lizza. We know about Trump’s revealing top-secret spy information to the Russian ambassador only because someone in that room, or someone close to one of the people in that room, leaked the story. Anthony Scaramucci’s potty-mouth telephone call to Ryan Lizza came about because someone leaked to Lizza that Trump had dinner with Sean Hannity, Kimberly Guilfoyle (both Fox News hosts), and former Fox executive Bill Shine.

The most recent major leak was the basis of the July 31 Washington Post story that the author of Donald Trump, Jr.’s statement saying his meeting with Russian agents was simply about adoption issues was crafted and dictated by Donald Trump himself. The statement was entirely false: The meeting was to get illegally acquired dirt on Hillary Clinton. Only people on Air Force One involved in the discussion about how to sanitize Junior’s meeting could have provided that information. The Post article cites as sources “one of the president’s advisers,” “the presidential adviser,” “some advisers,” “people with knowledge of the events,” and “people with knowledge of the discussions.”

The most damaging White House leaker thus far has been Trump himself: He has provided, in a televised interview and in tweets, information we wouldn’t have known otherwise. He is undisturbed by the inconsistency.

Tweets are the perfect medium for a man who dassn’t confront serious questions.

Both Scaramucci and Colbert are right: There are people in the White House who think they work for the people of the United States and that trumps any loyalty they might owe a man who has no moral center, ethical sensibility, or personal loyalty. When they leak, the information doesn’t just go to a reporter. It goes to people who read what the reporters write, people who often learn from those articles about questions they hadn’t yet thought to ask.

Special Prosecutor Robert Mueller, I’ve been told, is an assiduous reader of newspapers.

Bruce Jackson is editor-at-large for The Public. He is also SUNY Distinguished Professor and James Agee Professor of American Culture at UB.