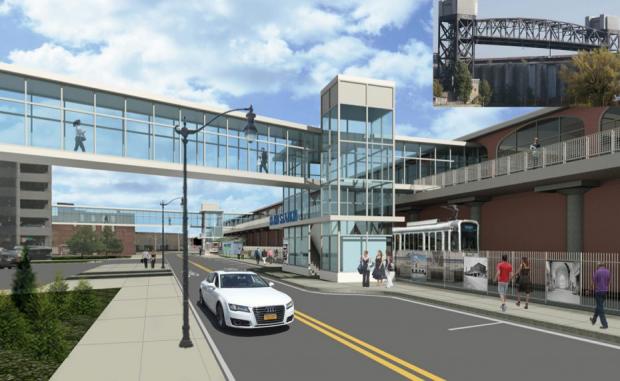 A proposed $45 million pedestrian bridge linking KeyBank Center and the DL&W termnal. Image courtesy of the NFTA.
by
The Public Staff
/ Aug. 1, 2018 7am EST

Local reporting: The Hamburg Sun’s Luke Hammill published a fine story last Friday, July 27, in which Boston Highway Superintendent Robert J. Telaak responded to a scathing audit by Erie County Comptroller Stefan Mychajliw, in which Mychajliw claimed $1.5 million of the town’s equipment was missing, including about $1.1 million in highway department equipment. Telaak showed Hammill that most of the equipment listed as missing in Mychajliw’s audit was, in fact, parked in the highway department’s garage, where it belongs. (“If it’s missing, then I don’t know what I’m plowing the roads with,” said Telaak’s brother Ken, a department employee, of a snowplow that the audit listed as unaccounted for.) Other allegedly missing items had been sold or traded in, the superintendent told the Sun, transactions made with the approval of the town board and recorded in the board’s minutes, which Mychajliw’s auditors apparently did not consult before issuing the report. Telaak told Hammill that Mychajliw’s auditors never came to ask him about the equipment’s whereabouts. He said they never spoe to him at all. “If they would have, we could have told them where it was,” said Telaak, who, like Mychajliw, is a Republican. “He’s the one who wanted to make this [a] big story, only because he wants to run against Mr. [Mark] Poloncarz,” Telaak told Hammill. “He can’t even be comptroller—talk about county executive.” Teals added that if Mychaliw does run against Erie County Executive Mark Poloncarz in 2019, he’ll send a donation to Poloncarz. Score one for local journalism—nice job, Luke. Now why didn’t the Buffalo News, which owns the Hamburg Sun, re-publish that story? The only story on the News’s website is a July 5 account of Mychajliw’s press conference rolling out the audit, written by a summer intern, and presenting the audit’s findings as fact.

Brown talksm but Pridgen listens: Instead of holding a unilateral press conference from the steps of City Hall to address the recent gun violence on Grape Street, as Mayor Byron Brown did, Masten District Councilman Darius Pridgen actually invited the community to speak on the tragic incidents that claimed the lives of a grandmother and her grandson. Pridgen got to hear firsthand about the community’s lack of trust in the Buffalo Police Department’s ability to protect them should they provide useful information to an investigation, and he got to hear people describe how poor community relations with the Buffalo police spill over into bloodshed and an abysmal homicide clearance rate. Speaking of community relations, brand new commissioner Byron Lockwood was supposed to make that the feather in his cap, but we’ve heard almost nothing from him or his initiative to make every officer in the city a “community police officer” besides interview soundbites. He wasn’t even present for Brown’s presser. Pridgen is an excellent listener, and that’s the first step. Let’s hope he takes the next 10 steps to help get this right.

Transportation funding priorities: The Buffalo News reported over the weekend that “Questions cloud future of planned DL&W bridges to KeyBank Center” due to cost overruns and structural issues at the train terminal. We have a simple solution: Don’t build a fucking pedestrian bridge. It would be far cheaper and saner to close South Park Avenue between Perry and Illinois Streets during game days. I know we just lit $750 million on fire for the Tesla factory, so dropping $45 million on a public transit infrastructure project seems kinda fun. But take a step back and realize that those dollars would be better invested in increasing accessibility, ridership, and infrastructure getting people to places of work rather than places of play.

Arts coverage in the daily paper: On his Facebook page on Monday, former Buffalo News cultural reporter Colin Dabkowski—recently shuffled out of that job and made digital content editor—posted a link to a story in the News about Torn Space Theater’s ambitious Response Festival, the bulk of which takes place at Silo City in the middle of August. (You can read all about it in next week’s issue of The Public.) “From the look of this shared link, you might think this is an article by an arts journalist about Torn Space Theater,” Dabkowski wrote. “It’s not. Instead, it is deceptive ‘Sponsored Content,’ which is now appearing in the place of what used to be journalism. This is a negative development.” Indeed it is, which takes nothing away from Torn Space, which is simply using the means at its disposal to publicize an exciting project. Dabkowski’s objection (and ours) is that the News is now selling coverage of the arts rather than providing it as part of its editorial content. That says something about the paper’s regard for coverage of the arts, and it bodes poorly for artists and institutions that cannot afford paid placements. Indeed, Torn Space’s director, Dan Shanahan, commented on Dabkowski’s post that he agreed that this was a negative development, and that the depletion of the News’s cultural coverage had in fact compelled the company to purchase coverage because they could not be assured the festival would receive attnetion from the News otherwise.