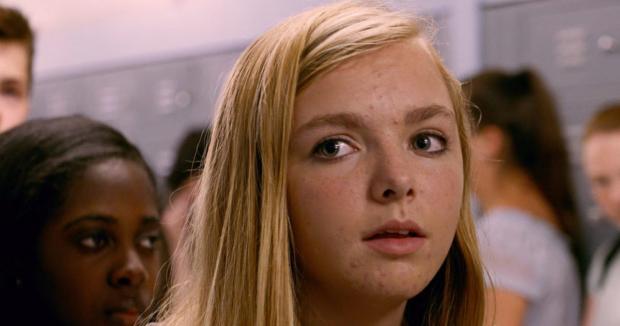 You may find yourself laughing and wincing almost simultaneously at Bo Burnham’s Eighth Grade. Both I and the young woman representing the movie’s publicist had a similar experience at the screening I attended. (Actually, I winced, she “cringed.” We were both amused.)

Burnham has portrayed his young protagonist, 13-year-old Kayla Day (Elsie Fisher), in such a sympathetically humorous, perceptive way, her lonely, anxious plight and youthful foibles provoke a sometimes uneasy mixed response. This is no by-the-book Hollywood teen comedy (and it’s on another aesthetic continent from the recent cutesy youth romcom, Love, Simon).

When we meet Kayla she’s in the last weeks of her middle school career, looking forward apprehensively to high school. While she’s done well enough academically, socially she’s a bust, despite her ineffectual coping and outreach efforts. Burnham’s frequently trenchant, if just as frequently low-key depiction of her efforts and failures is the central element in the comedy, as well as the source of our intertwined smiles of recognition and uneasiness. When the writer-director nails his material—and he often does—the movie produces both reactions.

Our intro to Kayla comes in the very first moments of Eighth Grade, as she records one of her little life-lessons video blogs for fellow early adolescents. This one is on “Being Yourself,” which “can be hard” she acknowledges in her slightly awkward attempt at an informal style. Self-referentially, she tells her audience she can seem quiet but assures them that “I’m really funny, cool and talkative.” This is so at variance with her life, another source of the twinned comedy and discomfort.

At school, she seems all but friendless, not disliked, mostly just ignored, even though she participates. (She bangs the cymbals in the school orchestra.) There’s a mean-girl subtheme, but Kayla’s not bullied, she’s just dismissed by rich-kid Kennedy (Catherine Oliviere), who grudgingly invites her to a pool party at her mother’s insistence. The pool party scene is dead-on acute, goofy and boisterous, while resonating the alienating oppressive loneliness of being odd-person out at a party.

Kayla, it transpires, hasn’t the common gift of easy, aimless connection, a lack she seems to share with her single father, Mark (Josh Hamilton). At supper, he tries to make contact with clumsy, stilted friendliness, as his bored, impatient and uncomfortable daughter hides behind her phone—which she’s almost never without, even, or especially, in bed at night. The implicit father-daughter personality correspondence is obvious.

The 20-something Burnham almost resembles a contemporary young Orson Welles. He’s a writer, actor, musician and comic, but he’s not now Welles’ equal in skill. His movie, for all its funny, moving insights, is a little uneven. He’s loaded his dice by making Kayla so very isolated without really justifying this, and he wasn’t above giving vent to a sentimental urge late in the movie.

On the other hand, he’s guided, coaxed and permitted some wonderful performances, most especially his 13-year-old lead. Fisher is so good she brings to mind that old cliché about an actor who doesn’t seem to be really acting. Fisher is uncannily good. And Hamilton handles a funny, but occasionally inconsistent part with aplomb. The whole cast is persuasively adept.

There’s also a bemusing subtext in Eighth Grade: The way social media has empowered adolescents for good and maybe ill. This movie seems to show Kayla’s situation is both alleviated and intensified by the internet.