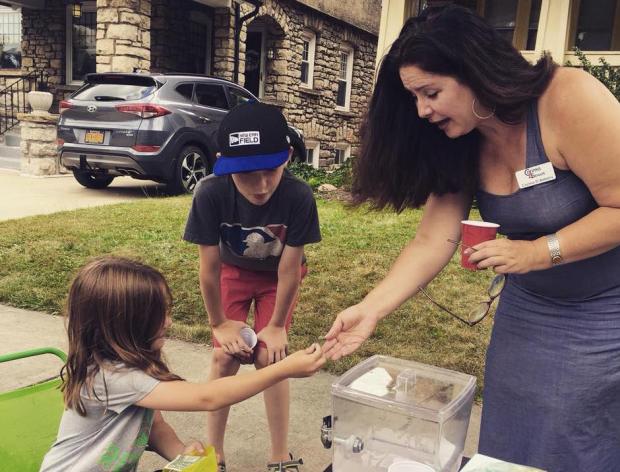 In 1992, 24 women were elected to the US House of Representatives, setting a record for the largest number of women to be sent to the House in an election, earning 1992 the moniker the “Year of the Woman.”

The 2018 election is shaping up to be the new “Year of the Woman.” A record-breaking 575 women are running for governor, House, or Senate across the country; many more are running for state and local offices. Some are propelled by the #MeToo movement and attacks on human rights by the Trump administration. Others are frustrated by the fact that men are making decisions and creating policies that directly affect women in their daily lives.

Carima El-Behairy, a Democrat seeking to challenge incumbent Republican Chris Jacobs for the 60th District seat in the New York State Senate, is one of the women hoping to make an improvement.

“We’re just sick of it,” El-Behairy said. “We are fighting the same battles our mothers fought, our grandmothers fought. We’re talking about the same things. We are 51 percent of the population, and we should represent, in gender, our population.”

El-Behairy, a business strategies consultant, is a first-time candidate, but she’s used to being the new girl on the scene.

Born in Grand Island, El-Behairy went to school around the world before settling in the city of Buffalo.

“Every couple years, I was the new kid in school,” El-Behairy said. “I didn’t look like anybody else in my school. And then you have the name.”

El-Behairy’s mother is from Ohio, and her father was from Egypt. She never felt like she truly belonged in either world. In America, she was “that girl with the funny name.” And in Egypt, she was “the girl with the American mother,” she said.

El-Behairy’s platform is built around women. Her campaign focuses on quality education and healthcare access and affordability, as well as election reform and historic preservation with development.

“We’re underrepresented, underserved, and overregulated as women,” she said.

Raised by two educators, El-Behairy aims to create universal pre-K. Parents are left to their own devices with pre-K because it isn’t mandatory, and programs are costly and inconsistent in quality. The typical options are a high-quality, private preschool, a neighborhood preschool, a nanny, or a family member.

If parents choose to send their child to a private preschool, it costs a small fortune. Childcare for a four-year-old in New York costs $11,700 annually on average. Care for an infant and a four-year-old? That costs an average of $25,844, or 38.7 percent of a typical New York family’s income.

And, for the 79.7 percent of New York families who cannot afford private care, other options might not be sufficient in preparing children for kindergarten. Some kids enter school not knowing their own name or how to spell it because they’ve been called nickname and don’t know their letters. Others have had a virtual babysitter experience by watching TV all day.

El-Behairy envisions a public system that starts at the age of three, which would benefit mothers, too. “Imagine what you could do if you could send your child to preschool at the age of three and actually work full-time,” she said. “We think about stuff like that as a woman. But oh my god, we’re represented by men in the senate who have no clue.”

Another thing the men running the state have no clue about is women’s health.

“Women’s health is different than men’s health,” El-Behairy said with a laugh. “If men had children, imagine what places we’d be going.”

For El-Behairy, it’s about a woman’s right to choose. She wants to remove abortion from the penal code and make it an aspect of healthcare. And access is what it’s all about.

The cost of healthcare prevents that access. As a business owner, El-Behairy worked to find plans and rates that would benefit her employees and not destroy their budgets. She looks at her mother, 81, who is in great health thanks to the high-quality insurance teachers have. But, El-Behairy knows that’s not the case for everyone.

“Medicare pays so well. so nobody goes to the doctor until they’re 65,” she said. “If you were able to offer health insurance for $300 a month, everybody would have it. But you’re charging $1,000 a month, so nobody has it.”

El-Behairy called the cost of healthcare “a war” against the poor and women. She knows low costs will increase the number of people covered, and vice versa.

El-Behairy also knows women are the future of government. As a woman, she sees the necessity of equal representation and understands the value of her unique viewpoint, negotiation, and communication skills, and savvy for business and nonprofit efforts.

“I’m not in it for me; I’m in it for you,” she said. “I’m not in it because I get to put senator next to my name. I’ve never run for public office before. ”You have to have new blood otherwise you’re just gonna swim in the same pool. You keep repeating the same problems and mistakes.”

The paucity of women in public office

One hundred years later, Hillary Clinton became the first woman to be nominated for president by a major political party.

The US ranks 102nd in the world for women’s representation in government. That represents a regression from an already bad place: Two decades ago, the US ranked 43rd.

New York has sent 28 women to Congress, second only to California, where 41 women have been elected to Congress. Vermont has never even elected a woman for a Congressional office.

For every single woman in political office, there are three men. Only six states have a female governor, two of which were appointed. And just 25.4 percent of state legislators are women in 2018.

New York is no different. No woman has ever held the position of governor. Women comprise 28.6 percent of state legislative seats, with only 15 women in the Senate and 45 women in the Assembly.

Currently, 32 New York women are running for the House, and only eight are incumbents. Alexandria Ocasio-Cortez, a democratic socialist, educator, and activist, defeated incumbent and Democratic Caucus Chair Joe Crowley in a stunning primary upset, proving a female-powered blue wave is possible in the fall.

Twenty-nine women have filed to run for state Senate, and 17 more have filed to run for the Assembly. The gubernatorial race is dominated by women, too: Incumbent Andrew Cuomo faces a primary challenge by Democrat Cynthia Nixon, and another Democrat, former Syracuse mayor Stephanie Minor, is planning to run a third-party challenge to Cuomo in the general election.

Local attorney and former advisor to Hillary Clinton and Governor Cuomo Leecia Eve is just one of several women running for attorney general.

But, even with the wave of women running for office in 2018, equal representation is still out of reach. Currently, there are 1,977 women in governorships, Congress, and state legislatures. In order to achieve equal representation, 2,006 more women must run and win.

El-Behairy said there are various reasons women aren’t being elected. Mostly, she says, it’s because they don’t run.

“We have to step up, and women don’t run for many reasons,” El-Behairy said. “One of them is family, the other is they don’t want to get messy.”

She said the nastiness deters women. Women are criticized beyond their policies, unlike men. Critics take shots at their appearance, their behavior, their families, and their decision to run while balancing a life outside of politics. The expectations women face in a construct of traditional gender roles directly juxtaposes a career in politics.

“We are expected as women to have children, raise the children, work full-time, manage the household, get dinner on the table. Don’t forget you have to do the laundry and keep the house clean,” El-Behairy said. “Every day. And don’t forget we have to carry the children, too.”

Women are also less likely to run without being asked, or in El-Behairy’s case, “talked into it a little bit.” And men are 15 percent more likely to be recruited.

“I figured, what could I lose?”

El-Behairy was herself recruited for the state Senate race. The Baker Project, an organization that recruits, trains and funds pro-choice Democratic women candidates in New York, asked her to run following a training for women candidates they hosted in Albany, where they realized Western New York had little to no female representation.

“Having support like that is invaluable,” El-Behairy said. “If I didn’t have that support, I wouldn’t be running. The fact that people believe in me and they felt that my track record with doing versus saying I’m gonna do it worked.”

She had felt the need to run for office before, but the timing wasn’t right for her. She had a flourishing business and was involved with community-focused nonprofits. She was busy raising her two sons to be responsible males and world citizens focused on equality. Now, with her two sons in college and fresh from a buy-out of her company, El-Behairy said the timing is finally right. If she hadn’t been asked to run for state Senate this year, she would’ve run for Buffalo Common Council next year, especially since there are no women on the Common Council.

“I figured, what could I lose,” she said. “Bad news is I could actually win, and how much bad news would that be for everybody else?”

As a strategic business consultant, El-Behairy looks at every option before she makes a decision. She feels the same tactics should be applied to politics. Instead of acting on gut feelings and personal attitudes, El-Behairy believes in backing every decision up with research.

But, even her most well-researched decisions are second-guessed by others, which she sees as a universal experience for women.

“What is taken as gospel for a man is questioned as a woman,” El-Behairy said. “If I make a decision, I’m asked two or three times, ‘You sure?’ Where if I were a man, they would be, like, ‘Okay, no problem, we’ll take care of it.’ And, I’ve found that in business, as well. I have been asked for things they never would have asked my partner.”

Before the critics jump on it, El-Behairy knows she’s not a politician or a trained public speaker. She under-promises and over-delivers, never making a promise if she can’t follow through—the opposite of what’s happening in male-dominated Albany right now.

El-Behairy succinctly summarizes her focus if she were to win the election: concentrate on what is working and make it better, and get rid of what doesn’t work. She centered her platform on women and protecting what’s important: civil liberties, healthcare, and those who can’t protect themselves.