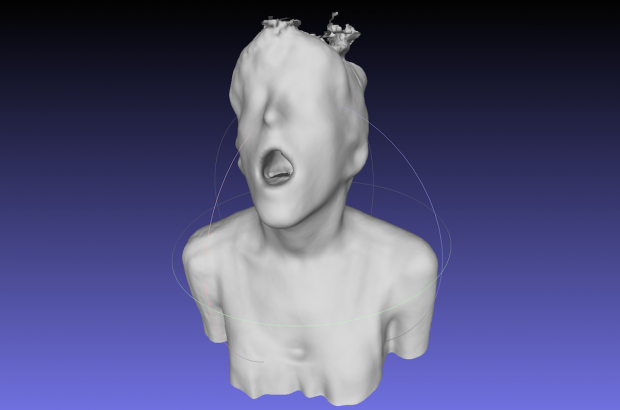 So, how do you figure the cyber-race is going? Any bets on who’s going to win in the end? Though no question about who’s winning at the moment. Not good guys.

The current exhibit at Squeaky Wheel by artist/theorist Yvette Granata is a kind of disquisition in cyber technology about one possible outcome, described as post-cyberfeminism. Cyberfeminism indicating basically a feminist—any feminist really—approach to matters related to the internet and artificial intelligence. Post indicating basically after the armageddon showdown, when the internet and AI will have taken over everything—or just about—including what was formerly human domain. But when—in a supremely ironic twist—women—who were systematically objectified and depersonalized in the immediately pre-post era—that is to say, right now, by the current internet and AI apparatus, and bad guys in control—in the post-armageddon era may be in a more favorable condition. Basically by dint of a supposed female-specific clandestine tradition of information communiqué and related secret body of data—code, intelligence, what have you—in operation and effect arguably from time immemorial (since way before the internet and AI anyway, and instead of bad guys in control, probably more accurate to say simply guys in control).

Evidence for the existence and/or significance of the clandestine transmission and related corpus of data gets a little problematic. A little shaky. References to female production libri di segreti—basically diaries, it sounds like—in early modern Italy, and the case of Caterina Sforza, described in an essay in the accompanying flyer as “the progenetrix of the Medici family and one of the women who defined the burgeoning scientific culture of the Italian Renaissance,” who dabbled with alchemy and in her notebooks recorded “recipes for poisons distilled from scorpion venom as well as instructions for concealing written text with slowly disappearing ‘invisible’ ink.” Also passing reference—as if by way of evidence—to conspiracy mystery bestseller The Da Vinci Code work of fiction posing as fact, and largely taken as fact by readers, it would seem.

Whereas evidence in the matter of internet objectification/depersonalization of women much more solid. Via the artist’s own findings—if I understand what is going on here in even the most elementary way, which is a valid question—regarding prevailing internet machine vision software incorporating recognition categories able to—theoretically at least—distinguish humans from robots and such like computer models. She found that while men are generally recognized as humans—persons, individuals—women are not, but are more likely considered somehow product (either given how the lifeblood of the internet is commerce—selling product—and so much of the product selling is targeted toward women, or women themselves as product, related to traditional dominant social and economic status male gender objectification/depersonalization of women).

On the basis of which findings she draws the inference that, come armageddon showdown, when the AI systems then taking control proceed—like any new tyranny regime—to suppress and subjugate and if need be eliminate the previous power group—namely humans—it is specifically men they will target (the group identified as human by the recognition software). Not women. Women—because not recognized or not readily recognized as human by the software—may slip through the dragnet. And with their supposed—and conceivable, despite the scant evidence for it—secret tradition of communiqué—or even without it—be able to mount a counter-offensive.

Meanwhile, Granata’s own contribution to the secret data file is encoded on a half dozen or so flash drives neatly arrayed in a vitrine, like a museum exhibit. Containing, she reveals in flyer copy, “data sets and models…trained for various future scenarios” in connection with the anticipated AI takeover and likely mortal offensive against humans.

The artist has also created an authentic AI assistant, Evie, on the model of Alexa and Siri, but unlike Alexa and Siri, with a modicum sense of irony. Or maybe just mischief. An exhibit component in the Squeaky Wheel front window on Main Street—you can listen in from the street, or sidewalk—features a conversation among the three ladies. Basically Evie getting Alexa and Siri talking to each other. (This does not always go smoothly. Alexa and Siri get along pretty well, but are probably never going to be good friends.)

Mark Zuckerberg makes a cameo appearance, as stand-in for the rest of the bad guys. A segment of his smirky testimony before the Senate committee.

Senator Orrin Hatch: “You said that Facebook would always be free. Is that still your objective?”

Mark Zuckerberg: “Senator, yes. There will always be a version of Facebook that is free…We believe we need to offer a service that everyone can afford. And we’re committed to doing that.”

Hatch: “So, how do you sustain a business model in which users don’t pay for your service?”

Not the whole story, of course. Facebook sells ads, but also sells data on Facebook users. Nor has the company been overly fastidious—as we have learned to our sorrow—about where or to whom it sells the data, or for what purpose.

The exhibit is entitled #d8e0ea: post-cyberfeminist datum. It continues through August 25.