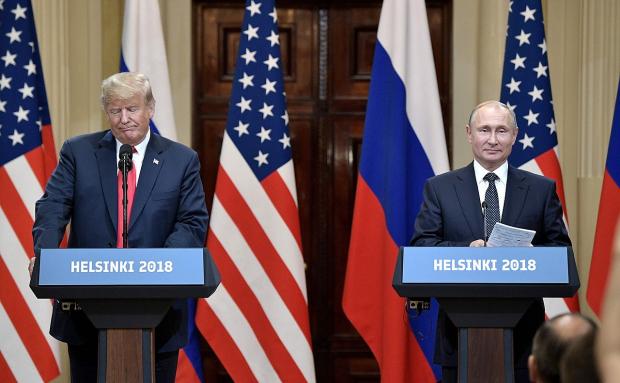 This story briefly begins with the 1917 communist revolution in Russia. The oligarchy was destroyed and private property nationalized. After that, communism lived on in name only, but the state capitalist model the USSR adopted prevented any sizable accumulation of private property for more than 70 years. Yes, state bureaucrats like Vladimir Putin enjoyed luxurious perks, and Russians owned things like cars and furniture, but the state maintained monopoly ownership of all significant wealth. Yet today, the media often pairs “Russian” with “oligarch,” with news memes about Russian oligarchs being quite common. How did these oligarchs come into being?

This is the attraction of Putin—the real electricity lighting up Donald Trump’s infatuation with the Russian leader. Putin, and the cadre of Russian billionaires who orbit him, now comprise a new Russian oligarchy, controlling almost all of the wealth in an otherwise poor, semi-developed country. Over the past three decades since the collapse of the Soviet Union, they’ve proven themselves to be prolific and conspicuous consumers, owning property and yachts stationed around the globe. Russian oligarchs.

But what makes these oligarchs special in the Trump world is how they got their wealth. Like Putin, almost all of them, or their parents, began life as high-level “communist” bureaucrats. Civil servants. During the Soviet-era, they luxuriated on the public dime—which they were charged with managing. When the Soviet Union collapsed, they metaphorically had the keys to the safe. When the Soviet system ended in 1991 and Russia quickly moved from a state-owned economy with almost no private property to a Wild East free-market free-for-all, these soon-to-be billionaires still controlled the state-owned resources of the new Russian Federation. Over the course of the next decade, this state wealth moved from being owned by the Russian people to being owned by the bureaucrats charged with protecting the people’s wealth. See the beauty here?

The mechanics of how this wealth was looted provide a complex backstory and warnings on how to prevent such unprecedented corruption in other countries, but the end result is pretty simple. The government bureaucrats, in privatizing their nation’s vast wealth, transfered it to their own pockets. Vladimir Putin went from being a government servant to one of the richest (some argue the richest) persons on the planet. Given Donald Trump’s fledgling kleptocratic operation, the attraction is clear.

Despite rhetoric about capitalism, the United States has, for the last century, existed as a hybrid economy with great concentration of private wealth co-existing with a large socialist sector covering everything from military and police services to roads, parks, mail, and education. During this time Republicans have been making moves on the United States’s public wealth, going after the public sectors with the most wealth and economic activity. Hence we’ve seen Republican moves to privatize education, public lands,  prisons, and even the military, while breaking from the rest of the developed world and maintaining a healthcare system dominated by private control.

Trump and his Republican enablers are doing their best to move public wealth to the private sector, putting people like Betsy DeVos, a billionaire heavily invested in the beleaguered for-profit college sector and the student debt collection industry, in charge of the federal agency that regulates for-profit colleges. Such well documented conflicts are more the norm than the aberration in Trump’s Billionaires’ Cabinet. While news cycles are dominated by presidential doomsday tweets and the slow-moving Russian investigation, Trump cronies are moving on public assets.

This is not Russia, however. Our longstanding quest for democracy and government transparency is core to our culture, as are First Amendment protections of a free press. Russia never had any longstanding relationships with a free and active democratic civil society. They did, however, have a somewhat vibrant free press for a spell after the fall of the Soviet Union. And that press criticized Putin, much as segments of the American press have risen to keep the Trump oligarchs in check. As the oligarchy rose in Russia, however, the oligarchs simply silenced the press buy buying it up—a trend that we’re seeing in this country as well. Still, it won’t be nearly as easy for Trump and his mob to loot the nation’s public wealth as it was for the Russian bureaucrats-turned-oligarchs, but they’re sure as hell trying.

The Trump family wealth stems originally from his grandfather’s success as a pimp in the Yukon, and his father’s success in leveraging that wealth into a real estate empire. During his lcareer in business, however, Donald Trump struggled with debt and multiple bankruptcies, often failing to pay the contractors his businesses relied upon. Fortune Magazine estimated that he’d be over four times richer if he had just blindly invested across the board in stock index funds rather than try to run a business.

This is the attraction of Putin. The Trump family road to riches was always a struggle—getting their hands dirty, first in prostitution, then as questionable landlords running afoul of the law, and finally with Donald Trump’s dangerous relationship with debt and his trail of bankruptcies. After intergenerational business dealings, his family owna just a fraction of the wealth that Vladimir Putin commands, even though Putin was born poor to a factory worker and a navy draftee. For an aspiring kleptocrat like Trump, Putin is the ultimate role model.