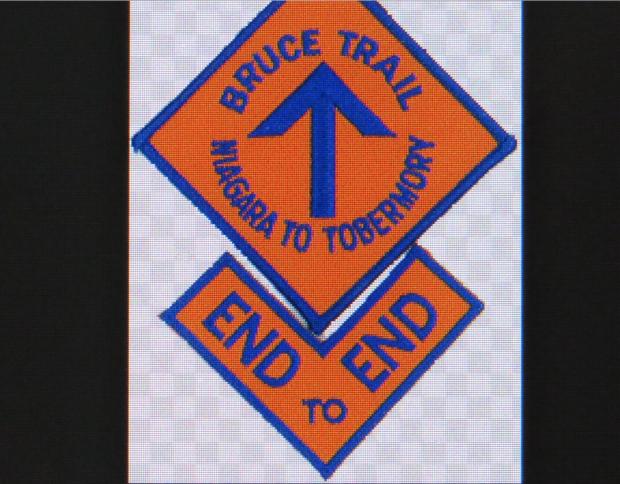 I had a wonderful trip with my family to the Bruce Peninsula, Tobermory, and Georgain Bay in Ontario last week.

The Bruce Peninsula is a portion of the Niagara Escarpment as it rings around toward Manitoulin Island and upper Michigan. Tobermory is the tip of the spear town as the escarpment dips between the waters bordering Georgain Bay and the rest of lake Huron. This is the northwestern trailhead of the Bruce Trail.

Tobormory is about a five hour car drive from the Peace Bridge. If you prefer, you can walk from the southerastern trailhead of the Bruce Trail which starts at the escarpment at Queenston near the General Brock Monument. From there it is an 894 km, or about a 550 mile hike through a spectacurlar natural world.

The Bruce Trail follows an important portion of the Niagara Escarpment. The exotic natural feature runs from near Watertown in New York state, up through the spine of the Bruce Peninsula. The escarpment forms Georgian Bay. From Tobermory, the escarpment continues to Manitoulin Island and then hooks westerly helping to form the Upper Peninsula of Michigan. It continues into Wisconsin helping to form the shoreline of Lake Michigan. The escarpment ends just northwest of Chicago.

The Bruce Trail is a remarkable geological, historical, and ecological jewel. The Niagarara Escarpemnt is the geologial reason that we have both the Niagara Gorge and Niagara Falls. It helps to shape and define much of the Great Lakes basin.

In 1990, the Ontario portion of the Niagara Escarpment from the Niagara River to Tobermory, was designated a United Nations World Biosphere Reserve. This is a pretty big deal.

Among other things the Niagara Escarpment World Biosphere Reserve hosts

36 species of reptiles and amphibians

more than 350 species of birds

Source: About the Bruce Trail

Canadians have embraced this area. The Bruce Peninsula near Tobermory is a very popular recreational destination. The conservation identity of the place has helped to preserve its natural beauty and wonder. The resulting economic engine built by a carefully crafted conservation ethic brings vacationers and travelers to visit in both manageable and lucrative numbers. Swimming, boating, hiking, biking and just getting outside to enjoy the great outdoors is a placemaker and conservation ethic that shapes the culture and economic success of this area. Americans and Western New Yorkers could emulate this context when it comes to how we treat our valuable natural areas including our Great Lakes and Niagara River waters and shorelines. Not only does the Niagara Escarpment run through Western New York, but our region is the gateway to the Canadian Biosphere Reserve. We have the same basic opportunities to explore and find wealth from the conservation of these natural resources.

Article: Serenity at its Best- A Weekend Trip to the Bruce Peninsula National Park and Tobermory

It comes as great news that a small breeding population of Piping Plovers has been established at Presque Isle (Gull Point) in Pennsylvania. Piping Plover is a critically endangered species that was once more abundant in the Great Lakes. Throughout its historic range which includes the east coast of North America, the central and upper great plains of the Mississipi basin, and the Great Lakes, this bird has all but vanished.

It’s extirpation in much of the Great Lakes, including and especially Lake Erie, has been a source of concern and action in recent decades. In 2001 only about 30 breeding pairs were found throughout the Great Lakes, mostly in Michigan. The last known Lake Erie pair was observed on the Ontario shoreline in 1971. The Presque Isle birds are the first ones in that area since the 1950’s.

Why the Rarity? This species lays its eggs in nesting areas along sandy shorelines and beaches. Human development including the building of shoreline homes, towns, and in places like Western New York, -industry, have ignored this environmental impact. In addtion human activity, including over use of these areas due to unchecked recreational strategies focused myopically on economic development strategies that ignore conservation, are responsible. Issues including habitat destruction and its impact on biodiversity are ignored in most places including right here in our own area. The Piping Plover is one of the canary’s in the coal mine that we have ignored.

Two summers ago I traveled to the Massachuesets coastline in order to observe a small colony of Piping Plover. The area near Plum Island had found some success in both engaging the public and protecting sensitive areas where the Piping Plovers breed. This is the video that I produced at that time. At the Edge of the Sea/Piping Plover

When I visited The Bruce Peninsula late in July of this summer, we traveled to Sauble Beach Ontario, along the Lake Huron Coast. Here a small colony of Piping Plover has been holding on. Community engagement and the resulting conservation ethic that has evolved in this beautiful summer beach commuinity has both protected the Piping Plover and resulted in continued breeding along the busy beach. The day we visited dozens of beachgoers proudly pointed out the successful 2017 Piping Plover breeding. Today’s GreenWatch Sunday Morning Television shows what we found.

During our July trip we stopped on a road to Crane Lake on the Bruce Peninsula near Tobermory. We were looking for Sandhill Crane and we came upon an early morning delight that was both astonishing and breathtaking. A group of these spectacular birds were feeding and socializing in a large field bordered on three sides by forest. The tall forest edges provided an amplifiying echo chamber that made the sounds of these birds obvious from a distance.  We found this probable family group consisting of adults and what we think must be this seasons juveniles. The morning atmosphere was heavy and humid with a slight overcast, perfect conditions for the aural chorous that we experienced, and that you can see and here in this short video.

Sunday Science and Sunday Morning Television are brought to you by GreenWatch, The Public, and the Friends of Times Beach Nature Preserve.