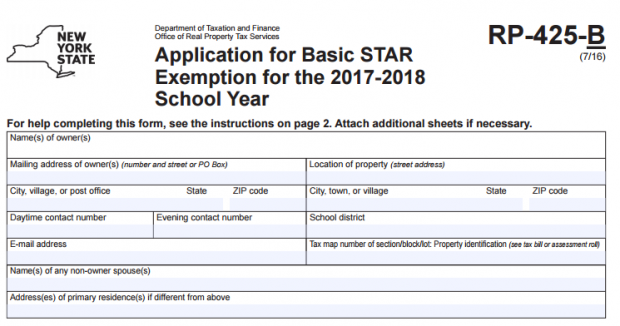 Donald Trump critics on the right and left have been hectoring the candidate to do what every POTUS hopeful in recent history has done - release some tax returns. There’s no law requiring that he do so, but it’s a tradition and Trump’s rejection of it raises questions about transparency and what it is that he’s hiding.

While Trump once claimed he wouldn’t release his tax returns while they are the subject matter of a current IRS audit, he has now flipped, and says he will never release them under any circumstances. Many commentators speculate that his tax returns might reveal some shady business dealings with, say, Russian oligarchs. But they won’t — that’s not it.

The real issue, I believe, goes back to a curious item that got only passing attention, but deserves more scrutiny. Donald Trump was the recipient of a middle-class tax exemption here in New York known as “STAR”. It’s reserved for people earning under $500,000 per year, and it acts to exempt some of the assessed value of a person’s primary residence from school taxes. Trump’s campaign spokeswoman said Trump would refund an amount equal to the STAR exemption, claiming it was all an “error”. But it was applied again in 2016, reducing the taxable valuation of Trump’s 5th Avenue condo by about $2300, saving him about $300 on his property tax bill.

Obviously, it’s comical to quibble over a self-described billionaire receiving a break of $300 against a $200,000 property tax bill. However, the STAR exemption could not have been made in “error”; it is not automatic. An eligible middle-class homeowner must affirmatively apply to receive a STAR exemption. To qualify for STAR, an applicant’s total household income, including that of his or her spouse, cannot exceed $500,000. More specifically, it must be an applicant’s total federal adjusted gross income. At least with the current form, the applicant must prove that he meets that income requirement by appending a copy of the tax returns for all members of the household to the STAR application form.

A STAR exemption cannot be the result of error or inadvertence — it must be applied for and approved. This can only mean that Donald and Melania Trump’s adjusted gross income for federal tax purposes was less than $500,000, and Trump’s tax returns would reflect that fact. It would also detail all of the various tax avoidance schemes this putative billionaire uses to lower his adjusted gross income to such a low figure. In other words, it would reveal an effective tax rate of a single digit percentile; possibly less than 1%.

This would be embarrassing to Trump by revealing how he manipulates a tax system that is designed specifically to help high earners do avoid paying taxes; that he is as elitist as they come, and that he pays far less of a percentage of his income in taxes than we normal people.

Put simply, were Donald Trump to release his taxes, they’d show that he lives a billionaire’s lifestyle while paying the income taxes of a surgeon. For a guy whose entire persona is based around dominance, success, and wealth, this would be damning and embarrassing. Donald Trump applied for the middle class STAR exemption, and he provided the documentation needed for approval. He can’t release his taxes because it would put the lie to everything he purports to stand for.